Wow!  I can hardly believe my last update was 17 days ago.  Time flies!  Well, it certainly flew by for me and Bo out camping for two weeks.  Lots to report and lots of photos, of course.  Sit back and revisit our trip with me!  (If this starts feeling like it is getting too long for prolonged enjoyment, I may decide to do two posts instead of one loooooong one....we'll see how it goes...).

My crazy blog title??   It has some significance:


Yes, NO internet.....this is my valid excuse for not blogging for so long!  A signal was available a few miles away from our camp ground, but it was if-y and just too much to deal with to create an entire post with photos, etc....especially with no backup power cord for the laptop...I left it behind at home base.


Now for some details....  We finished up our "business" at home base and  took off, heading east, on June 4th.  Mondays are usually pretty good for getting a decent choice of campsites as most campers have gone home after a weekend of campfires and mosquito bites.  The worst part of this journey was driving on the interstate. UGH.  I could have taken back roads but for the same amount of miles it would have taken, at the minimum, an hour longer and a lot of navigation.  I wanted to get to my destination so there would be time for a new idea if my original plan didn't work out for any number of reasons.  But, with that said, once we hit Zanesville, we got off the interstate and had a pretty 30-mile drive south  on Ohio By-Way 284.  It was rolly-polly, curvy, hilly, twisty, turny, windy, and every other adjective which does not mean "flat" and "straight"!


First, a little history about the area we called "home" for two weeks.  It is called
AEP ReCreation Land.

ReCreation Land is a 60,000-acre outdoor recreation area built on land once strip mined for its rich deposits of coal.  AEP has received many awards for this project from environmental and conservation groups for going above and beyond the legal requirements for land reclamation.  ReCreation Land offers a number of outdoor activities and is free to the public, but you do need a permit (available online or at a number of physical outlets in the surrounding area -- but, actually, I never saw anyone checking for them.)
AEP planted over 63 MILLION trees, established 350 stocked lakes and ponds, created 380 campsites in various locations, and created hiking, mountain bike, and equine trails to turn this area in to a vibrant recreational destination.  The 1400-mile Buckeye Trail also runs through this region.
So...back to By-Way 284.  While it was very scenic and only 30 miles, it took forever.  Could rarely drive over 40 mph. I passed only ONE car the entire way and never did see a house.   Internet would come and go.  I was really hoping I didn't break down!  Seeing  no homes, buildings, businesses, cars, or people, all of a sudden we came upon a very quaint and picturesque church/cemetery.  I couldn't figure out where anyone came from to attend this church! 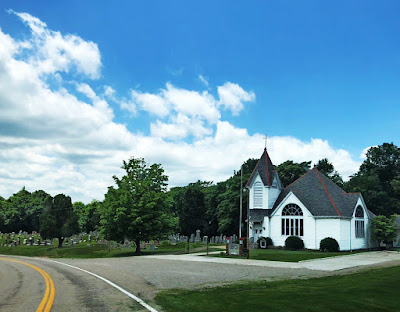 The same question arose when I saw a tiny "high school" -- no photo, but believe me, it might have held a total of 30 students.  But where was everyone??  I wondered about this the entire two weeks!
Finally, we arrived at our campground, Sand Hollow. 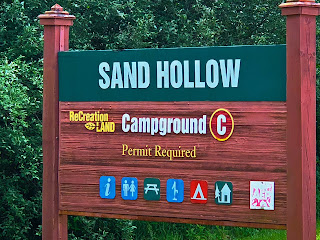 A well-maintained gravel road took us on a short drive to our first sighting of what was in store.  And what a sight it was! 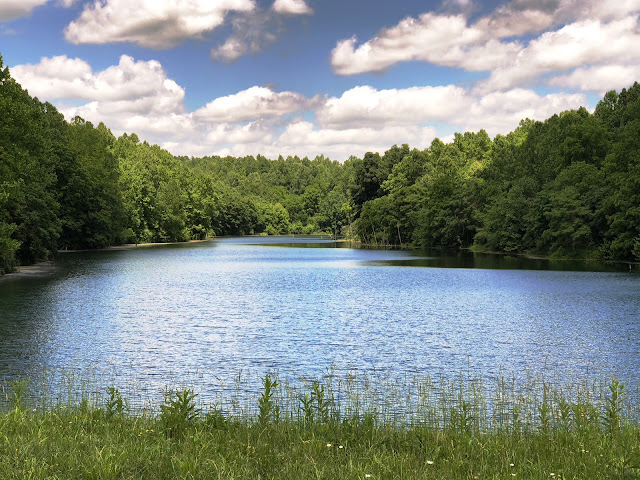 This was looking really good, especially after an almost 4 hour drive!  We pulled into the actual campground which bordered this beautiful lake and drove around a little loop with the pavilion in the center.  This was also where the hand-pump water access was located.   Yay!  Potable water! 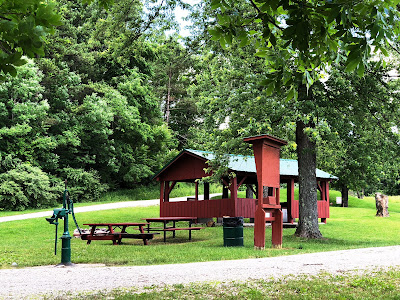 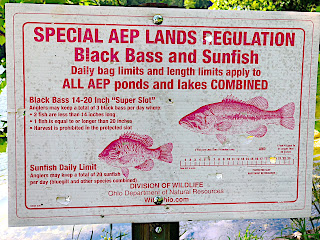 There were a couple of fishermen right down by the water, but the campsite I had my eye on there was empty.  There were only about five sites in this area by the pavilion (4 out of 5 were empty).  These guys were just day-fishing.  Not camping.  I got out of the van and said hello -- mentioning I was just checking out the campsites.  They got the hint and in about 15 minutes they left...hopefully that was their plan anyway!  But, that was all I needed to get the van situated and nab this perfect site!  Even if someone else took another nearby site, they were still plenty far away. 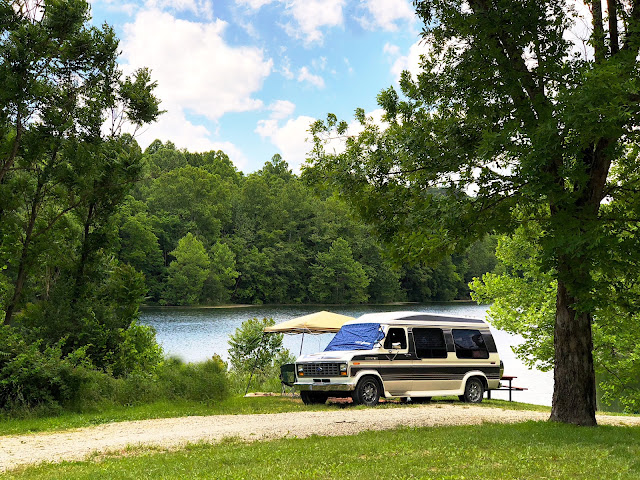 Picture perfect!  It paid to show up on a Monday!  There was a boat launch area right by our site, but even that wasn't a problem.  Only 2-3 people showed up over the next 4 days to take their little boats (no motors) out.  Not a big deal.  I complained about "no shade" at our previous site in the Hoosier National Forest, but that was not a problem here...I was willing to forgo shade for the great view, plus it wasn't hot at all.  70's.  A far cry from 93* on our last treeless outing!
Bo loved having the water right at our campsite! 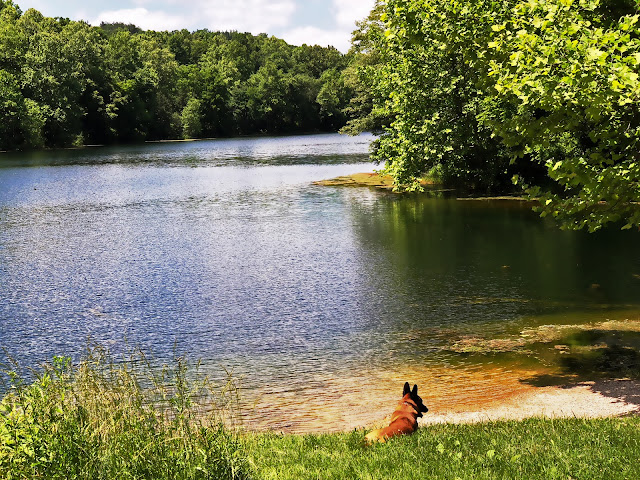 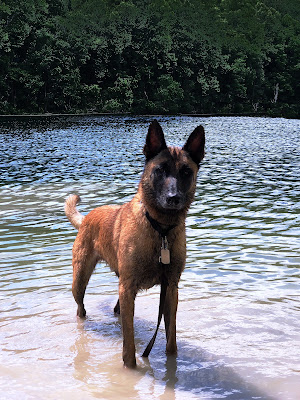 We never tired of the view!  Loved the misty mornings... 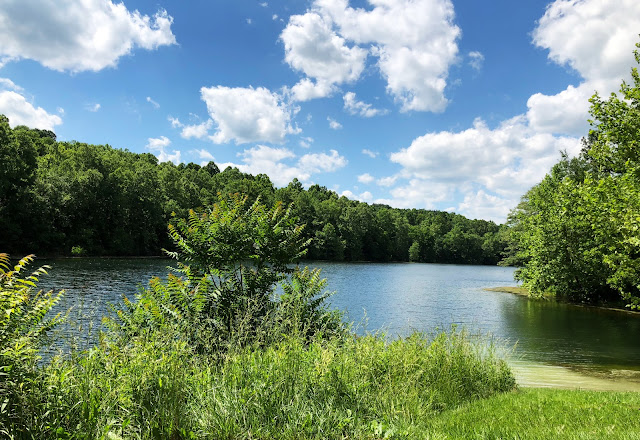 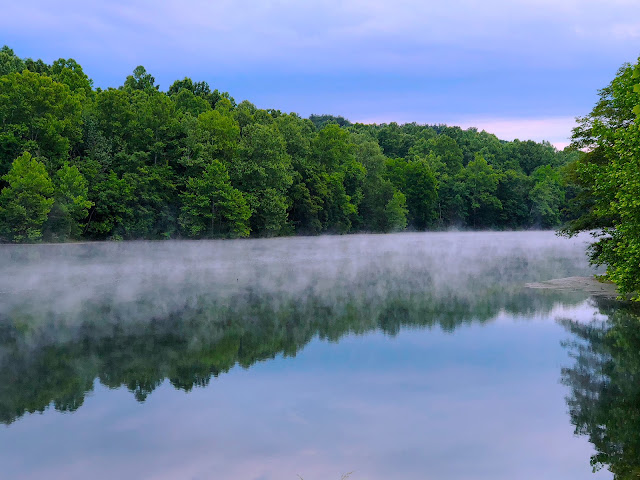 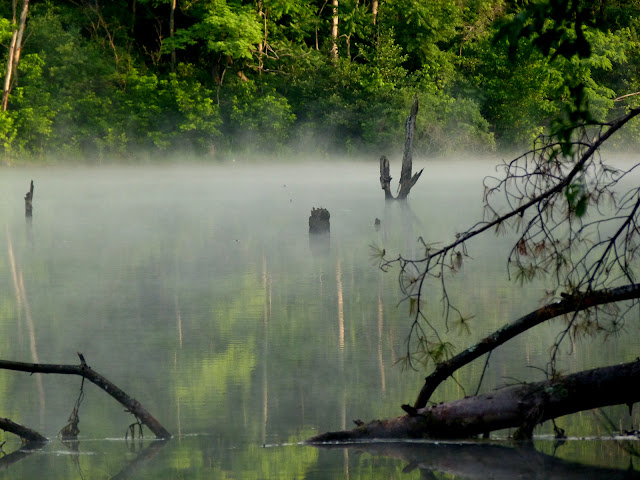 You can read all you want to about specific campgrounds, but you never know exactly what you are going to find until you arrive.  Well, we found a good one!  The good weather was initially short-lived, however.  But I was already aware that rain was coming on Tuesday. And, did it rain! 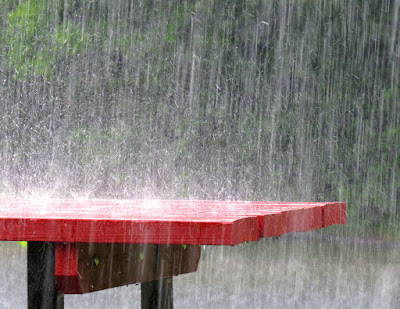 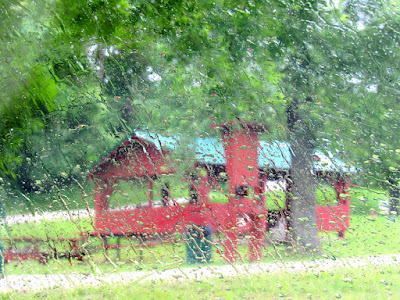 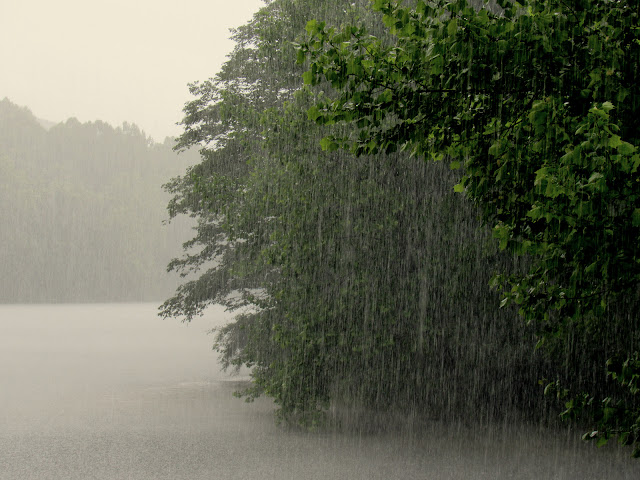 When it finally let up a little, Bo was anxious for me to stop reading my book and he wanted out of the van.  The rain didn't bother him! He went right back out to his lookout spot, raindrops and all!  The rain actually felt good and kept the temps at a very comfortable level. 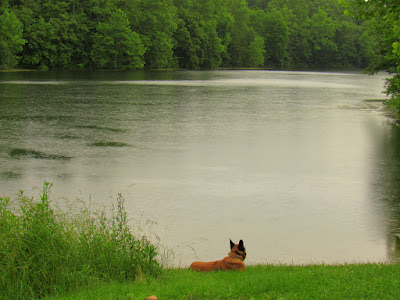 It did clear up by evening and we were treated to a very nice sunset... 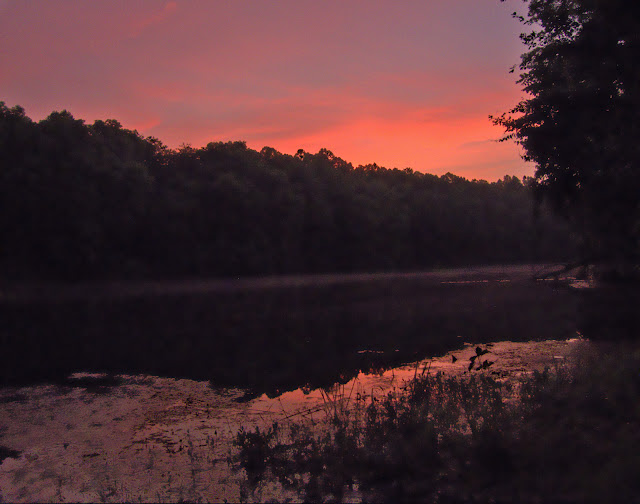 We stayed at this site until Thursday afternoon, with the weather cooperating and cool, knowing that the weekenders would soon start arriving and this area of the campground would probably be very active. I wanted to score a good campsite on up the lane before others had the same idea.  More on Site #2 coming up.

I have a really nice 65 qt Yeti cooler which holds ice for many days.  But, eventually, you do need to replenish it.  The nearest town, McConnelsville, is about 15 miles from this campground.  So, we did go "into town" a few times over the two weeks.

McConnelsville is right on the Muskingham River.  It's an old, small, quaint, one-main-street kinda town with a center rotary.  (Most all of the upcoming photos of McConnelsville were taken from the van while driving...). 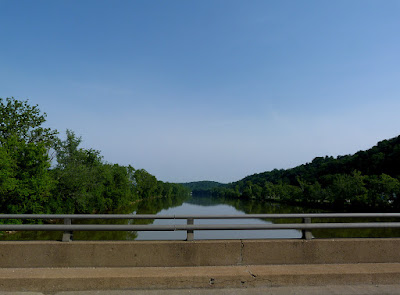 The center's statue is that of "Simpson" (to his hometown).  The bronze statue is a Civil War private which stands 13 feet tall.  It is perched on a block of granite that came from the Gettysburg battlefield.  McConnelsville is a big reinactment community.  There is a lot of history here. 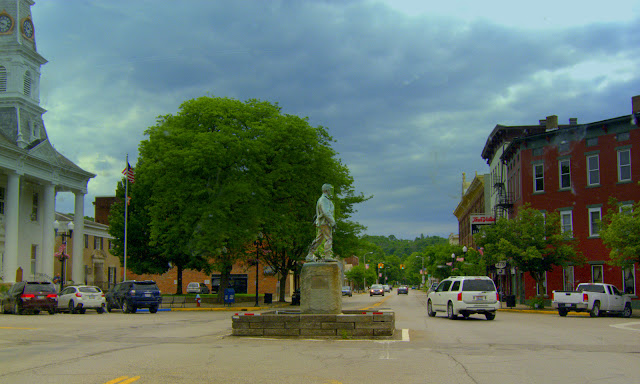 The Twin City Opera House, which opened to the public in 1892, hosts live drama and musical performances, film screenings and ghost tours.  McConnelsville, in general, is known for its paranormal happenings! 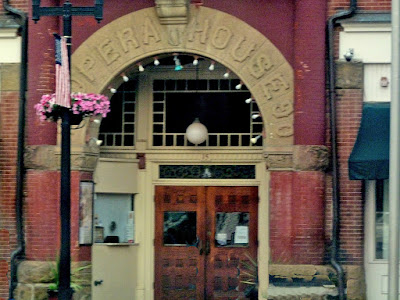 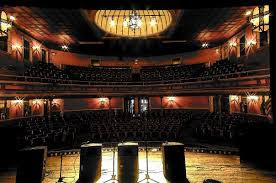 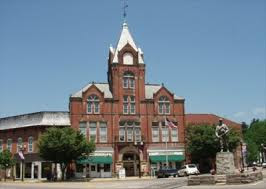 Our primary stop and reason for going to McConnelsville was ice and replenishing our food supply a bit.  Right on the main drag was a Kroger's.  If you are at all familiar with Ohio, Kroger is headquartered in Cincinnati, making it the largest chain grocery in the state.  Why would anyone care to know about Kroger??  Well..... 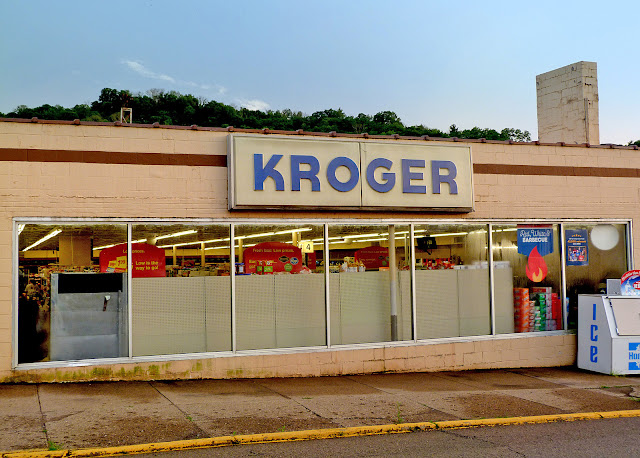 This particular Kroger store is known for it's diminutive size.  It is THE SMALLEST Kroger store in existence.  Who knew??  Literally, if someone enters the same time you do, you have to walk single file through the aisles.  It's a little crazy in there, but the good news is, you don't have to walk five minutes to the far back corner of the store just for a gallon of milk!  There are two very short, cramped, checkout counters with very friendly employees.  The size of the town (pop. 1800) will probably never warrant a larger store than this.  Anyway, just some McConnelsville trivia!

Yep, I think this post is going to get too long if I keep going with the rest of The Tale of Two Weeks at Sand Hollow.   So, I'll end here for now and catch up the rest of the trip in a day or two.  Hope you have enjoyed the adventure so far.

Thanks for tuning in and please use my Amazon link for your orders if you think of it.  Gas prices are killing me on these excursions.  Every little bit helps!  Many thanks! 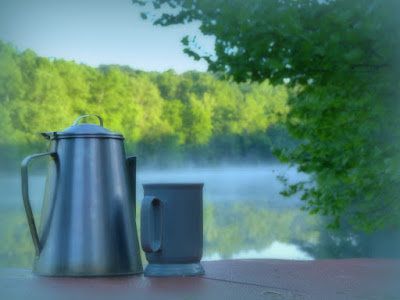