First, thanks for your continued Amazon orders via the link here on my blog!  Every little bit helps! Remember.....Valentine's Day is coming up!

I hope the first month of 2015 has been good to you...health, wealth and weather!  We've had marvelous weather here at the BLM near Yuma.  70's and sun every day.  EXCEPT today...it's a rainy one -- few and far between, but it really helps keep the dust down and contributes greatly to having beautiful desert flowers in the spring :-)

I've had a few "pro" golf days...well, that might be a slight exaggeration!  One day I actually made a hole in one.  Whoa!  All the guys I play with were certainly surprised....maybe more surprised than I was!  LOL!  We tried another desert course down the road last Tuesday.  There is NOTHING flat about that course, like our daily course.   This one is full of hills, canyons and big mesquite trees and bushes...can hardly see the flags. And millions of rocks, of course.  It's a par 3/nine holes.  Nine was enough!  At least 1/3 of the time is spent looking for balls out there...you really can't see where they go...it's kind of a shot in the dark.  We divided up into two teams of four each. As usual, I was the only gal playing. Anyway,  it was my first try at that [obstacle] course and I carried my team by somehow making 3 pars....and a birdie on the last hole.  I made the only birdie out of everyone that day!


Now for the BIG news!  As you might remember, I had adopted Cody before I started on this RV adventure.  Sadly, for several reasons, he just wasn't cut out to be an RV traveler  :-(  so I had to surrender him.   I've been looking for months for a dog that, hopefully, will fit the bill. 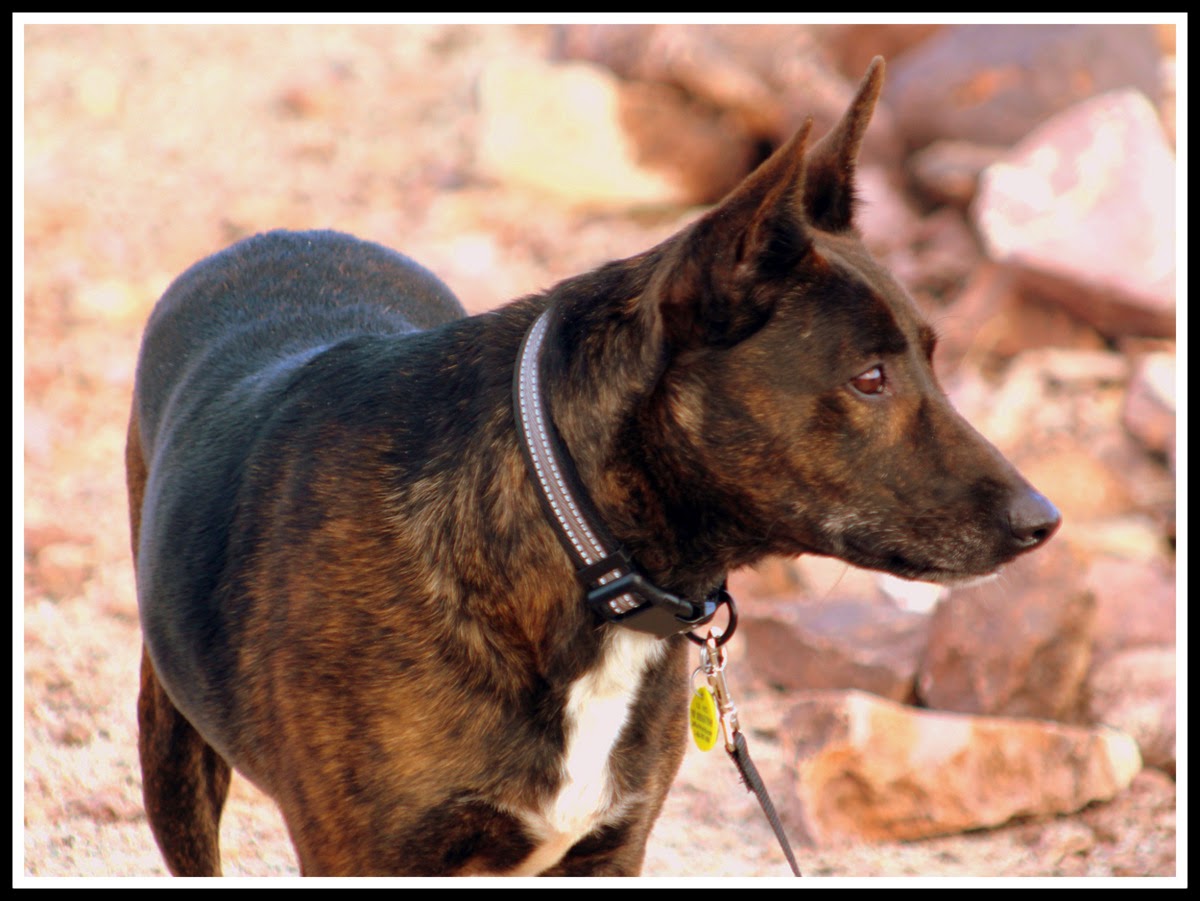 I spotted him on a Phoenix rescue group's website.  He was described as a Belgian Malinois/German Shepherd mix (it's a "designer mix" sometimes called Shepinois or German Malinois), "sweet" and "gets along with other dogs and people". Not much to go on, so I called the shelter.  The owner (Ann - a pilot for JetBlue) said they rescued him from the Phoenix "pound" where he was on the "kill list".  She knew he didn't belong there! He had already been in two other rescue shelters...a Shepherd rescue and an Akita rescue.  He's only about 4 years old...what a miserable life.  Then somehow, he ended up at the "pound".  They had put him on the list because he was so "submissive" they didn't think anyone would adopt him.  Wouldn't you be submissive after such an unsettled life??  Who knows what he's been through....


Once Ann and her volunteer group rescued Nikko, and actually gave him some positive attention, he became everyone's favorite.  But, he still hadn't been adopted after being there for a whole year!  So, I decided to make the 4 hour drive to Phoenix on Saturday to meet him.  The rescue shelter is in downtown PHX and not in the best section of town, but that didn't stop me!  I walked into this very small, hole-in-the-wall place and it was chaotic!  I could hear LOTS of dogs barking in the back and most all of Ann's volunteers are Spanish-speaking, so for me, that just added to the craziness.  And there were other people in there looking to adopt...it seems they all wanted the small, yapping-type dogs.  UGH...not my type.


Anyway, they brought Nikko (just one of the 4-5 names he's had over the years) out and understandably, he was a bit reserved.  Nikko is about 54 lbs - truly a medium-sized dog, but a bit on the smaller side for this mixed breed.  (Cody was 80+ lbs). We took a little walk outside and he was pretty good on the leash, but was used to Ray, who walked him every day.  We made a visit inside the RV and he didn't seem to have any problems with it.  Took a few more walks around and then he headed back to the RV door on his own!  Ray said he was very good....always waited to go outside for his "potty break"...would never go in his pen.  And never seemed aggressive or "scary".


After about 2.5 hours with him, I said, "Yes!"  And off we went.  He was a little excited in the RV at first...couldn't figure out the best way to look out the window(s).  But once he realized the couch was the best vantage point to look out ALL the windows, he was a happy traveler!  I left him in the RV while I ran into PetSmart for food, etc.  He was fine when I got back in about 1/2 hour.


We had a long drive back to our site and he was just perfect the whole way.  We stopped in Quartzsite for overnight because it was getting late and we were both exhausted from our big day. We only had an hour to go, but I couldn't drive another minute!  We took a little walk and had dinner then lights out about 7:30pm.  He was quiet the whole night sleeping on the rug and/or the couch. 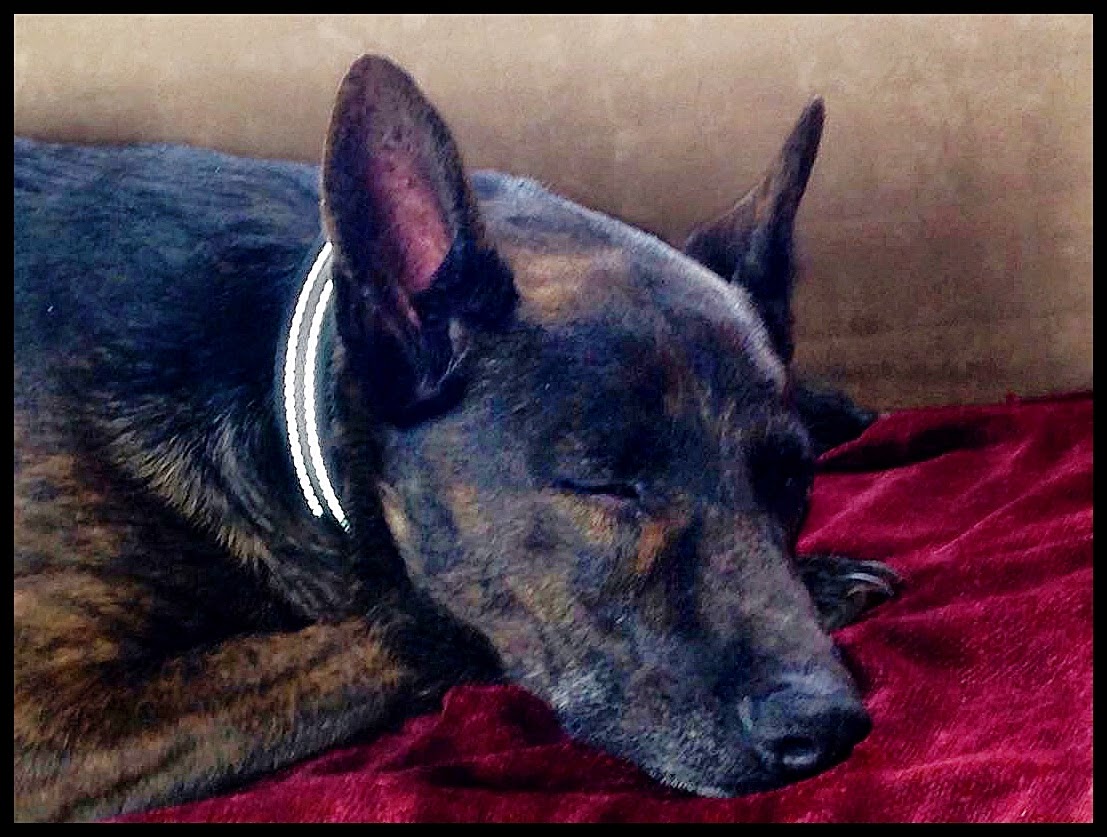 Up early in the morning, breakfast, walk, and on down to our campsite an hour away.  He was great.

Here are his best characteristics so far, although realistically, any could change as he settles in....

* He doesn't make a sound!  No barking, whimpering, whining....NOTHING!  I have never had a dog that makes no sounds at all!
* Housebroken
* Calm
* Does not jump up on me or other people
* Seems quite attached to me already
* Rides well in the RV
* Lives well in the RV
* Walks well on a leash
* Knows "sit" and has already learned to "stay" and not bound out of the RV when we're ready for our walks
* Trusts that I'm his "person".  Found that out when I introduced him to some folks around here.  He was fine with them, but understandably hesitant.  Stayed by me, listened to me and looked to me for directions.


FYI - The Belgian Malinois and/or the "Shepinois" have replaced German Shepherds in many roles, i.e., military maneuvers and as police and border patrol dogs.  They guard the White House (the U.S. Secret Service uses the Shepinois exclusively) and they were utilized in the Bin Laden raid.   Here is a link that describes the mix in detail, if you are interested:  Shepinois

So, all in all, we've had a good first couple of days.  A little at a time, tho',  It will take us both awhile to get acclimated to our new life together and establish routines.  I see a lot of hikes in our future!

Can't leave you without some recent sunrise/sunset photos! 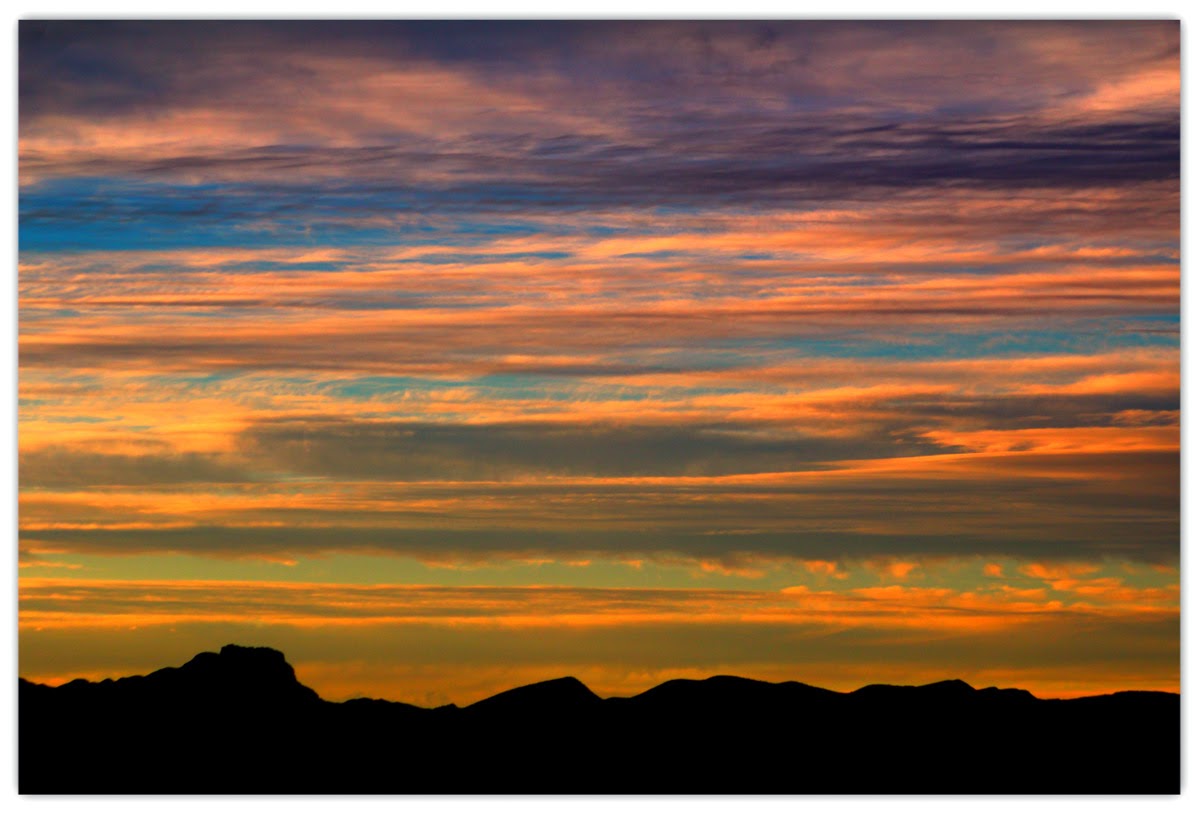 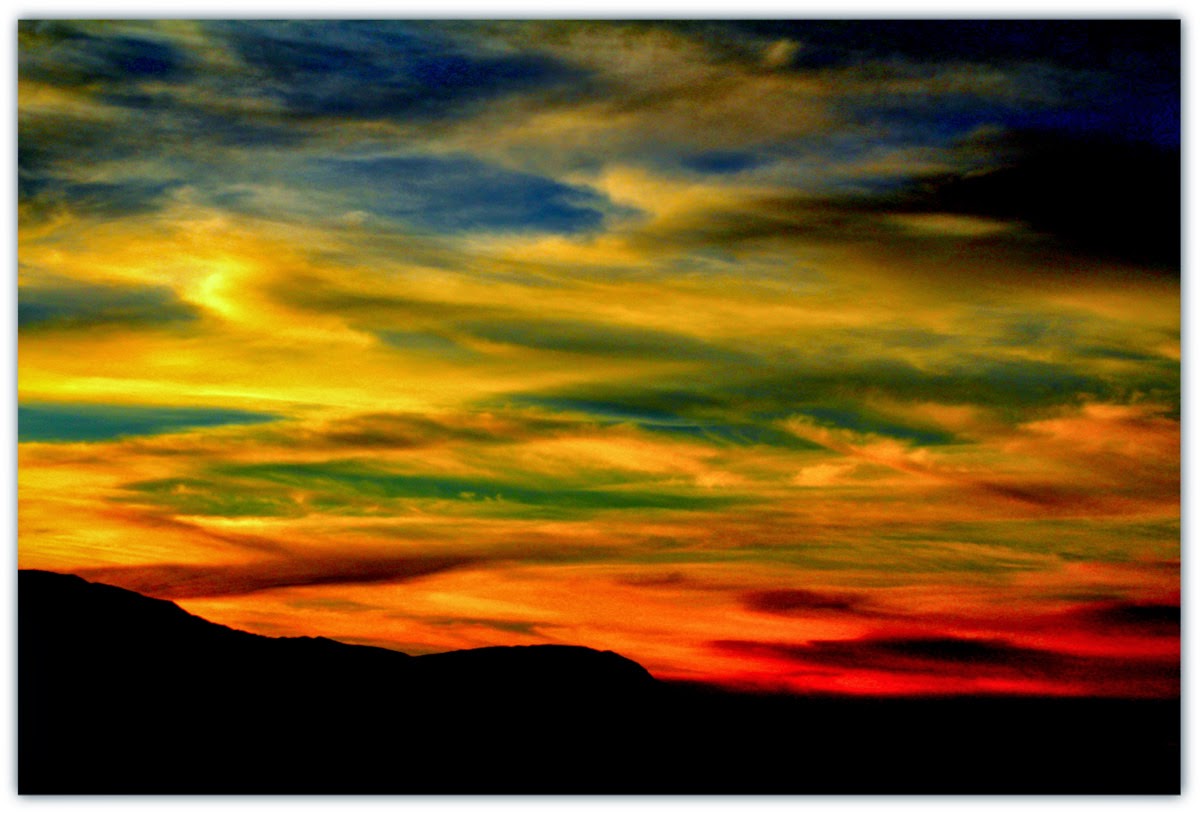 Visitors to this BLM camping area sometimes drive or walk up to my site to see the view of the reservoir from the very best vantage point :-) They should visit at sunrise! 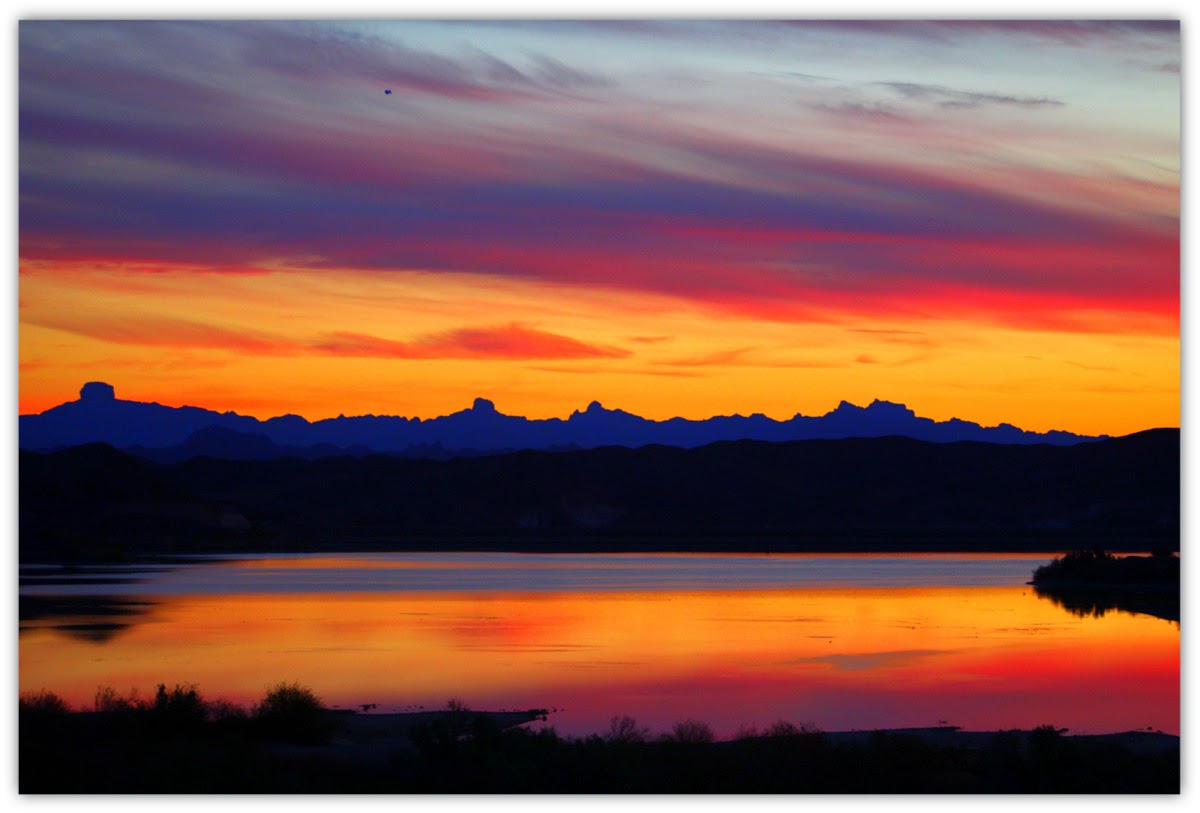 Thanks for letting me share Nikko's story with you! 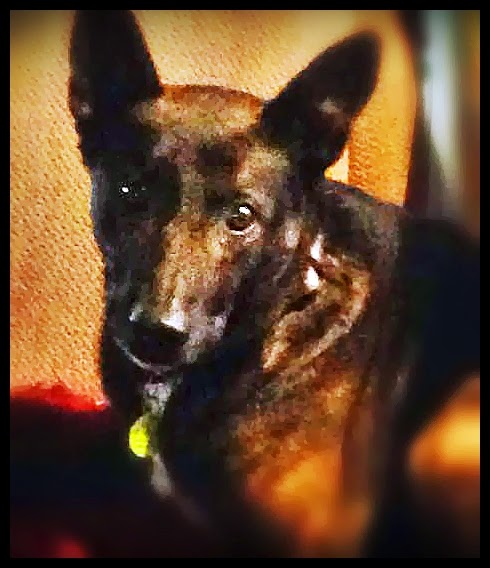 Everyone have a great week!