It's a bright, sunny, warm day (like all of them!) here at the BLM this morning.  Enjoying some English Breakfast tea and English muffins with chipotle jam!  Good start to the day!


I'm going to go backwards with events on this post...starting with this past Sunday.  This first two hour happening will have a lot of photos!  Nikko (I'll talk about him a little later) and I took a walk in the mid afternoon.  Nothing too eventful about that.  But when we got back to the RV, I looked out just to the left of the reservoir into the nearby rolling hills where there are some hiking trails and slowly rising from behind one of the hills I saw this!

Obviously, I raced inside to get my cameras.  I didn't know which direction it was headed and I didn't want to miss any of this unexpected event!  The balloon slowly floated up and over the reservoir, which, you may recall, is right in front of my 'house'. 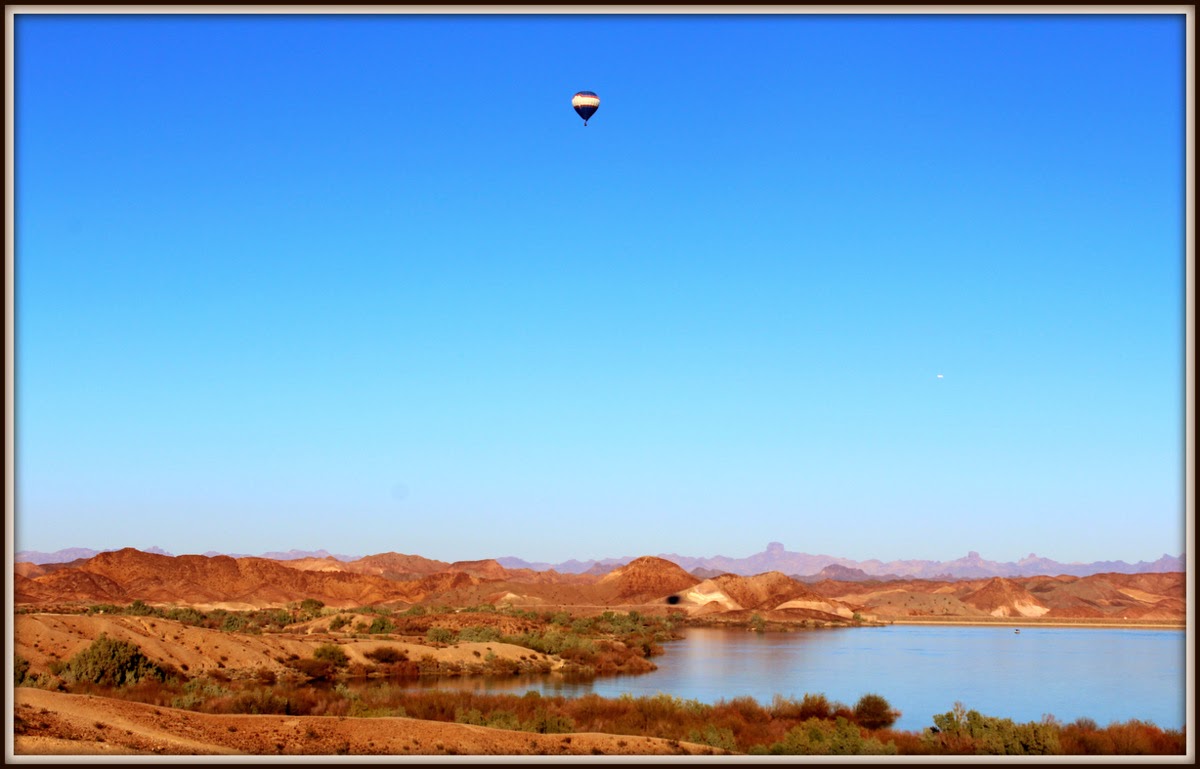 I figured that would be pretty much the end of it and it would float off into oblivion.....WRONG!  It started coming down toward the water....I got a great shot with Castle Dome directly behind the balloon. 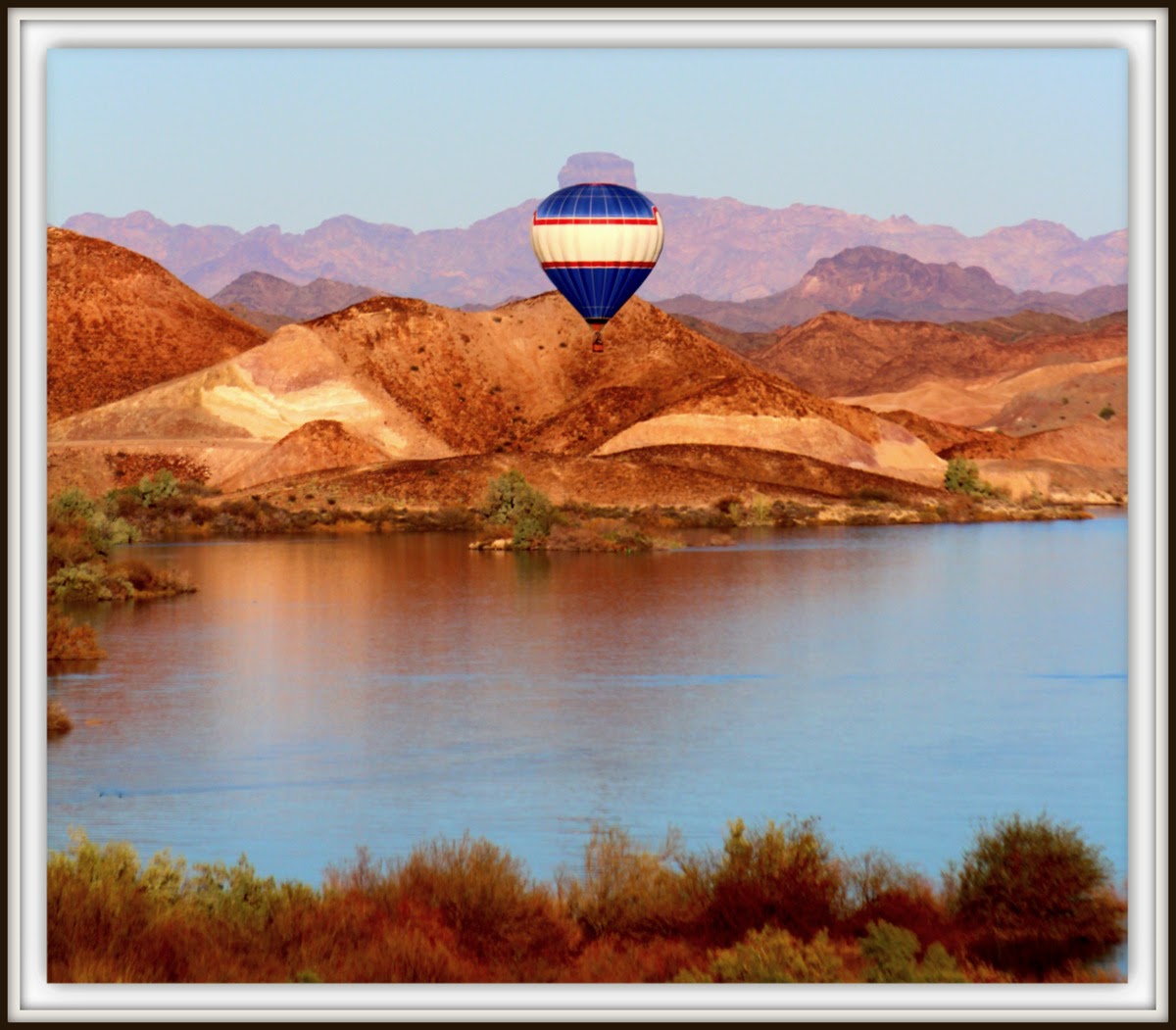 Then, to my surprise, it came down ON the water! 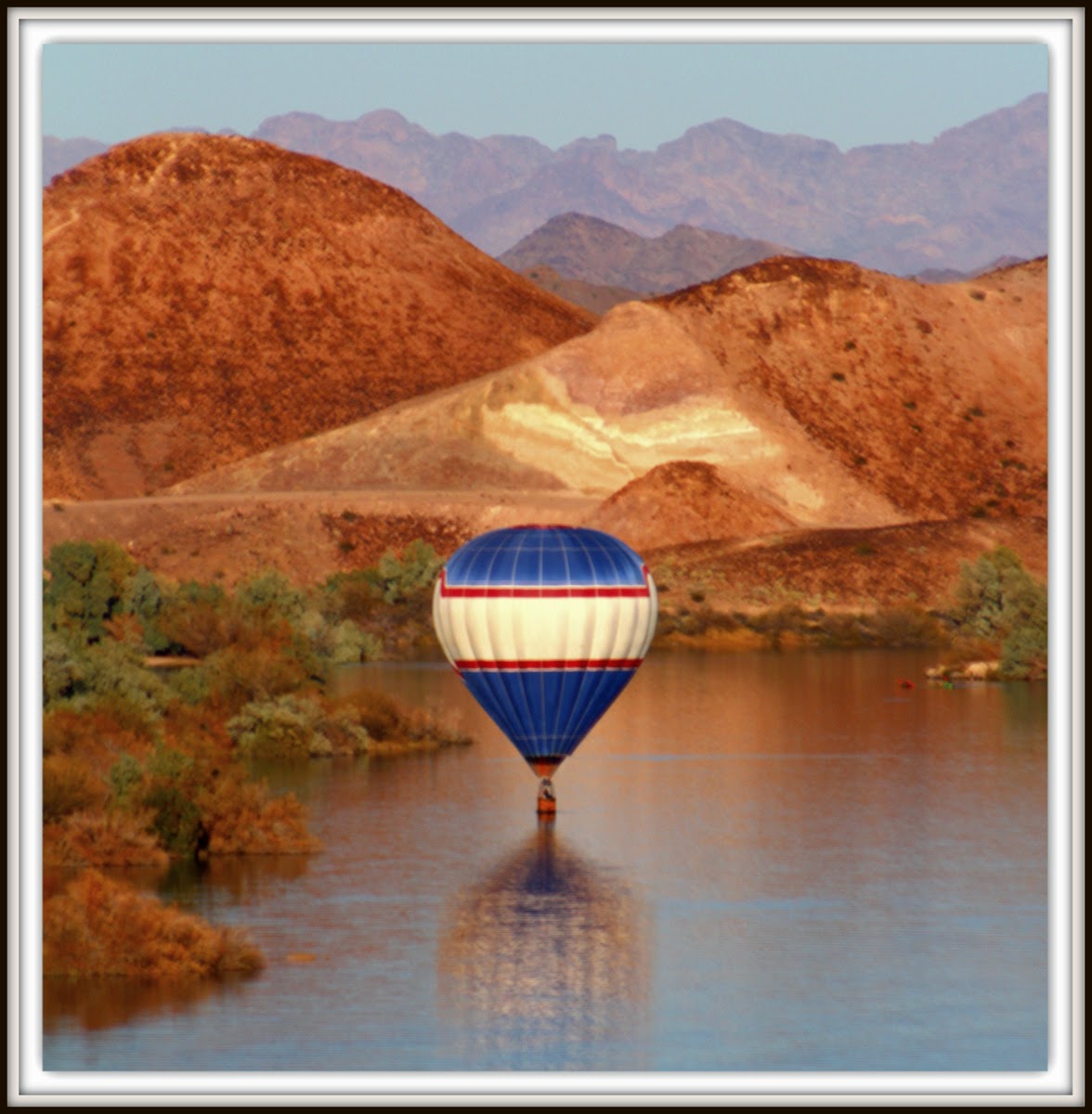 In a couple of minutes, the pilot positioned it into a little inlet... 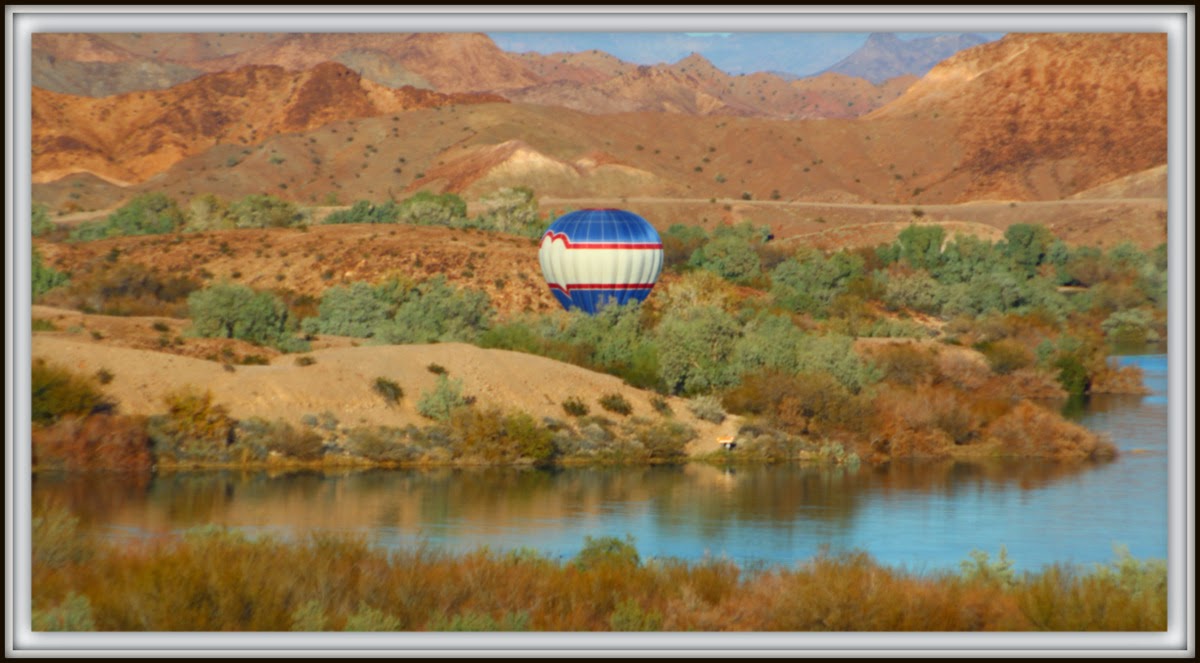 He continued the up in the air, then down to the water sequence several times...moving to the other side of the reservoir.  At once point he touched down on the opposite sand shore for a few minutes....note the cool, vintage Airstream camping on the water's edge! 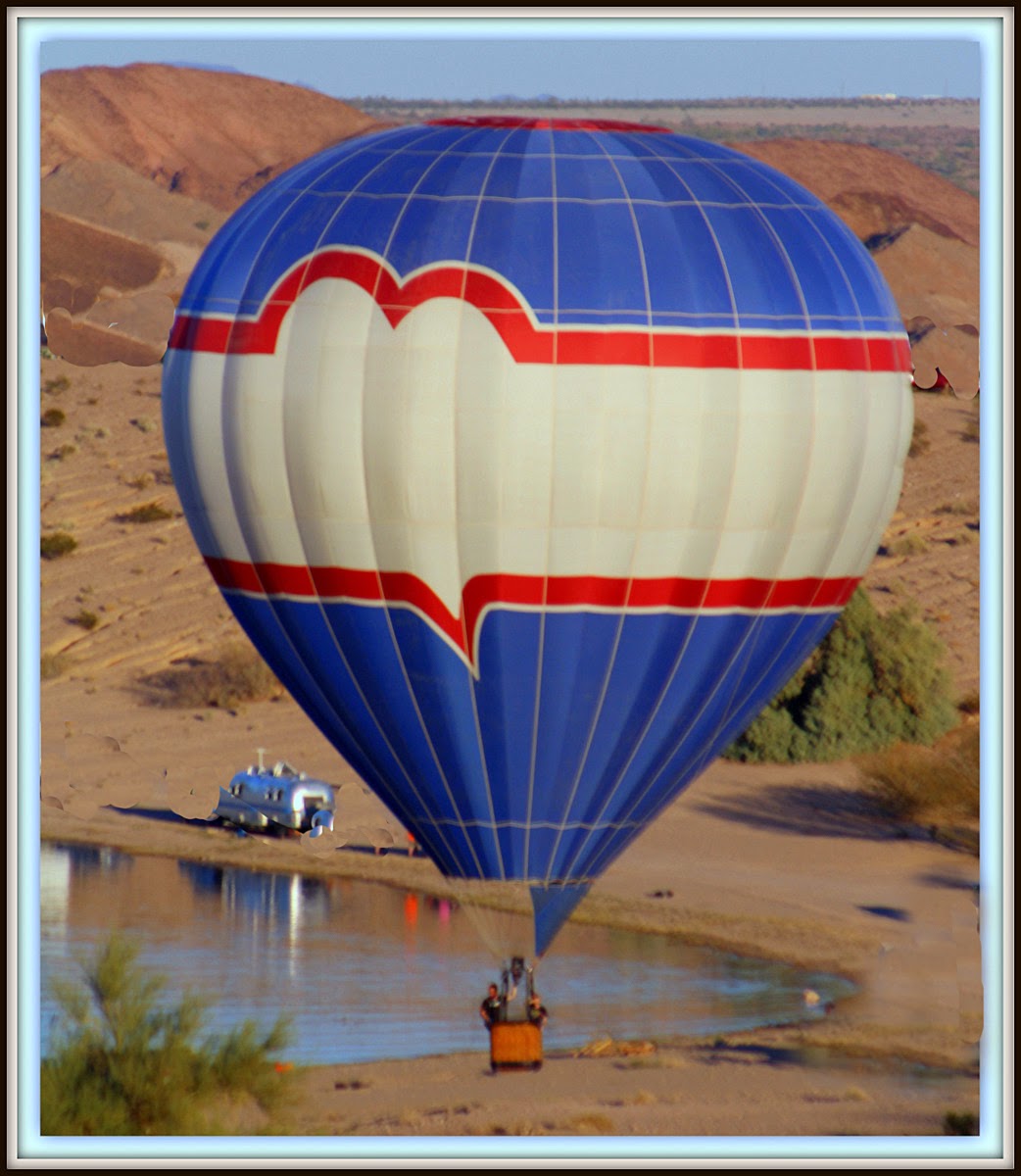 Again, I surmised he would just "float around" and then away....WRONG AGAIN!  He decides he going to head down into the deep crevice just below me...at this point he is quite close!  This guy was a masterful pilot! 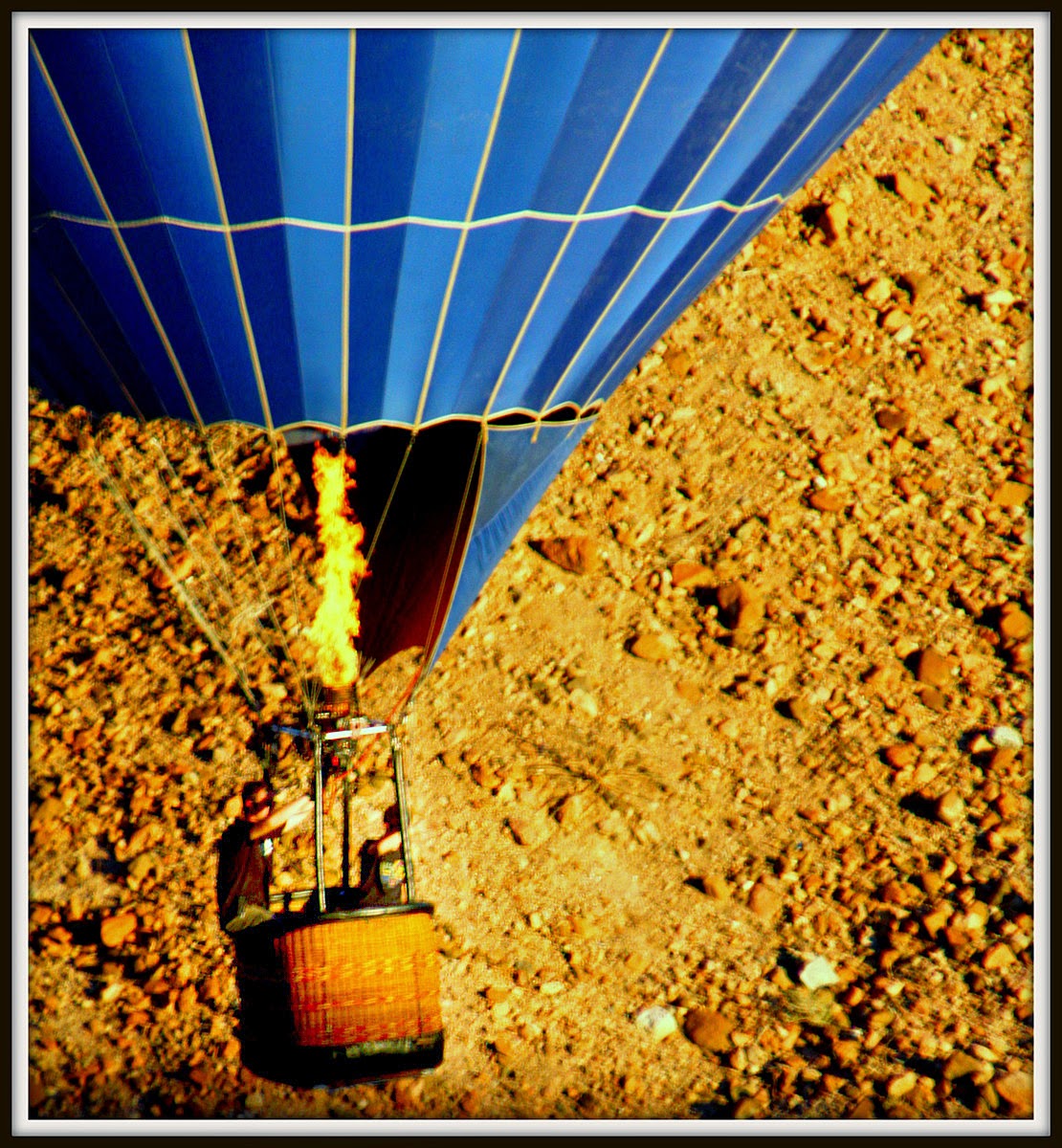 Then he rose up out of the crevice and came up the hill right behind me. 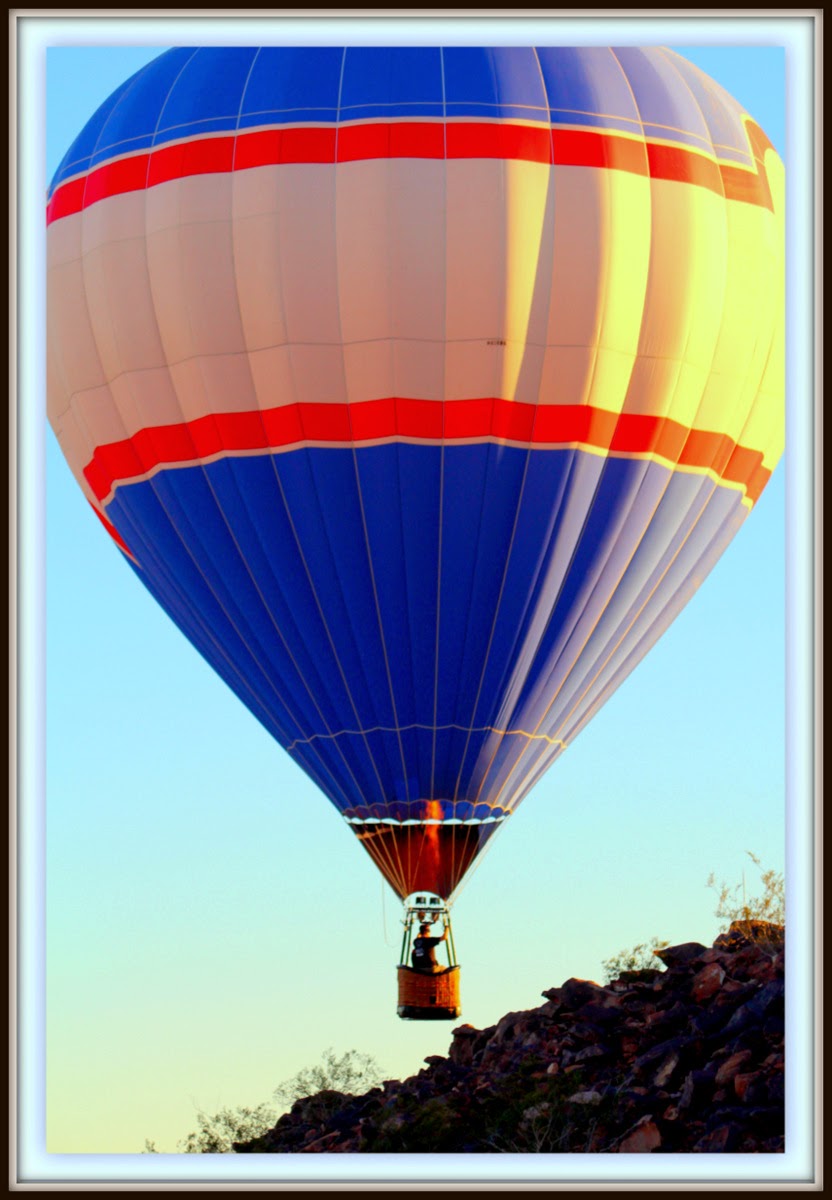 It was getting late in the day and the sun was lowering in the west, so I knew he would wind up his "show" soon.  He drifted about a little while then headed to the northern part of the BLM where his crew was waiting.  WOW!  That was a great two hours!  I took tons of photos, as I'm sure you can imagine.


Goodbye!
Thanks for the surprise visit! 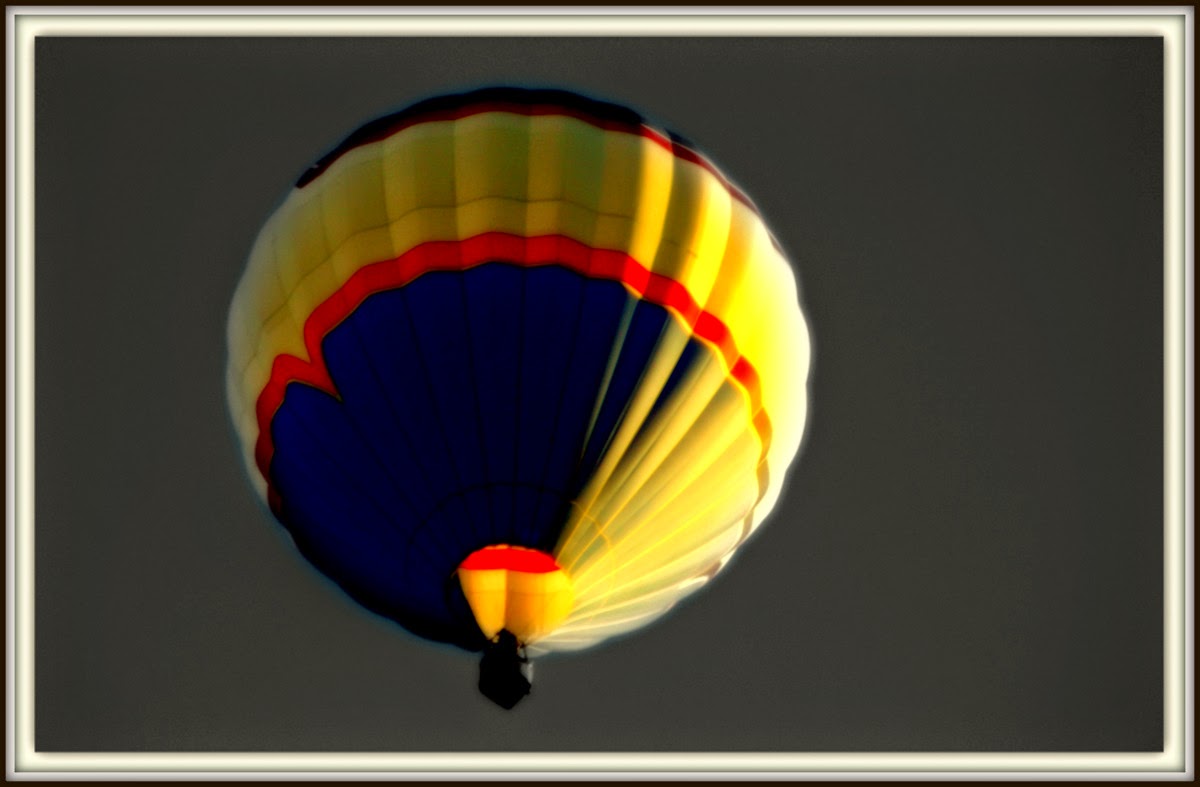 OK -- what next?  I saw a pretty sky prism one day.  I just happened to look outside at the right time. They don't last very long.  I still don't know why they form on a sunny, dry day. 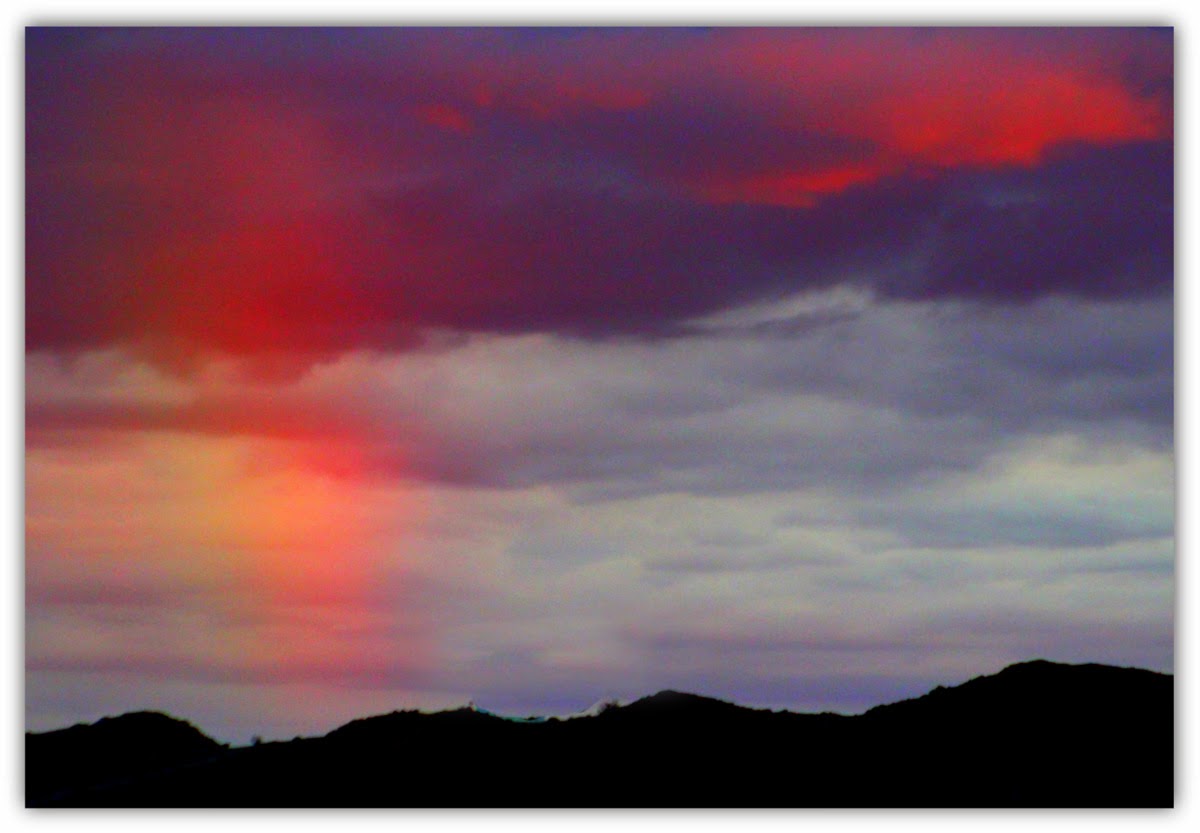 The Sunday before last Nikko and I took a stroll down to the Gravel Pit Ramada for the weekly music fest (I finally made it down there!)  I wanted to get him a little used to a larger group of people.

There are quite a few musicians out here.  Many live along "Music Row" which is behind my area...brings like minds easily together during the week for play and practice.  I would say most are guitarists (easy instrument to travel with). There are a few singers and miscellaneous instrument musicians.  This group plays mostly "old" country which I'm not as familiar with so I was happy to hear a little Roy Orbison (The Big O) in the mix!  It was fun and Nikko did pretty well but wasn't fond of being too near the speakers.  He can probably hear a lot of sounds we can't!

This brings us to the Nikko details.  We've been together sixteen days now and he is doing very good! He's settled in nicely and knows the RV is his home.  I must say, his inherent, Secret Service, "guard dog" instincts are always at work!  He does not want anything or anyone near the RV!  The boy CAN bark!  But, that's the only time he makes a sound.  So, if anything or anyone approaches, I can trust that his bark is alerting me to something and he's not just barking to hear himself. 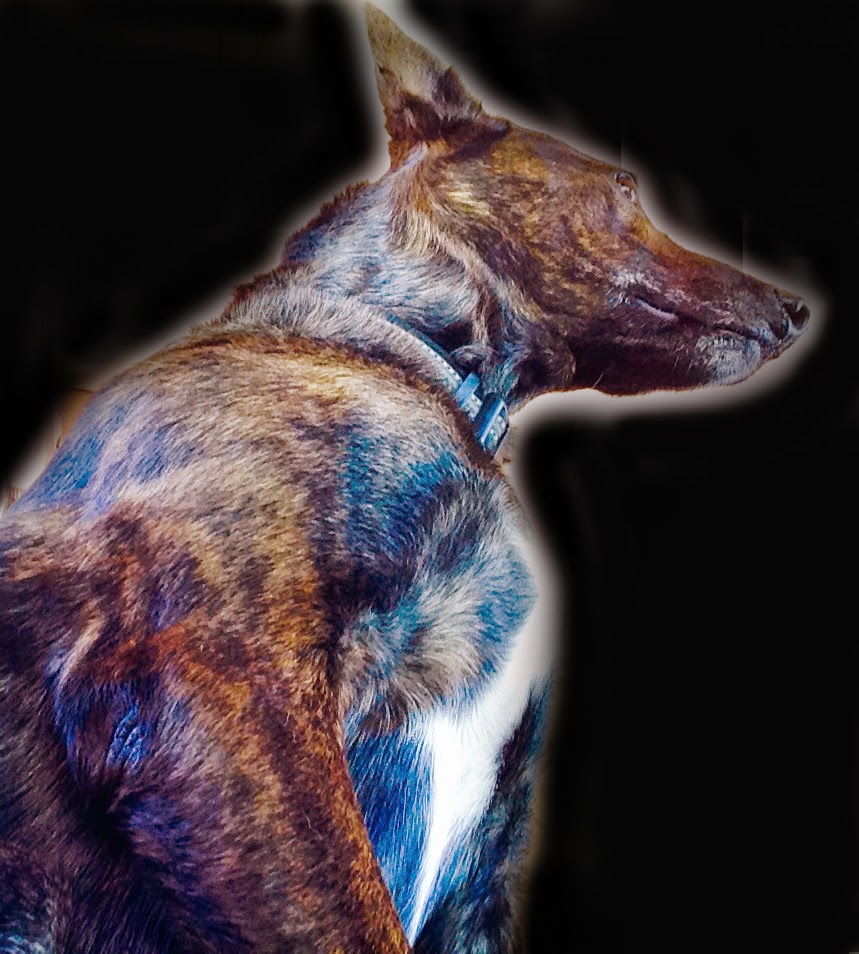 He minds pretty well so far and walks good on the leash.  He does get annoyed when I'm on the laptop.  He has learned that means I'm focused on something beside him!  He MUST, relentlessly, keep putting his paw ON the keyboard!  When I turn the generator on, it lulls him to sleep -- that's kinda funny! 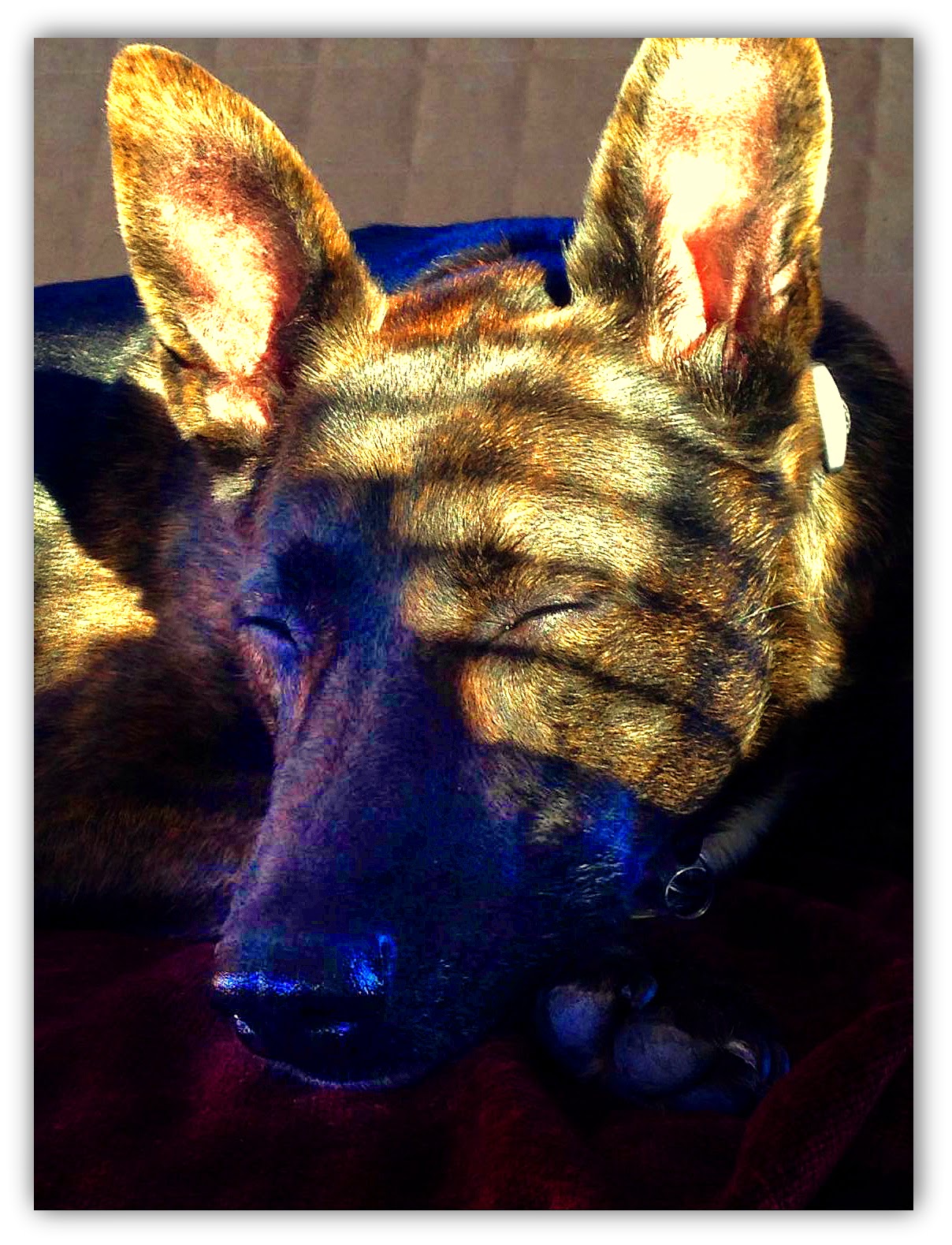 He knows "dark" means bedtime.  He sleeps curled up in a tiny space on the floor right next to my bed on a fluffy blanket, eventho' he has the whole RV to himself.  He also knows "light" means morning and as soon as I start moving around like I'm awake, he jumps up on the bed to be sure I stay awake and GET UP!

SIDE NOTE:  I must put in a plug about the food I give Nikko (and other dogs I've had). It's BIL-JAC.  I swear by this food!  His coat was very dull, his skin was flaky and his teeth were extra yellowed when I picked him up.  Within just a few days on Bil-Jac, his coat was shiny, no flaking and now, after a few weeks, his teeth are getting brighter and brighter.  Amazing transformation!  Others around here have noticed it, too, and are switching to Bil-Jac.  It's a family owned business since 1947 in Medina, OH. It's not inexpensive food, but it's worth every penny!  Try it with your dog(s) and see the difference! It's available at Petsmart, or you can order it on Amazon.

I didn't go out to the Dog Burn this past full moon, Feb 3rd, but I did get a nice shot of the moon rising over the reservoir: 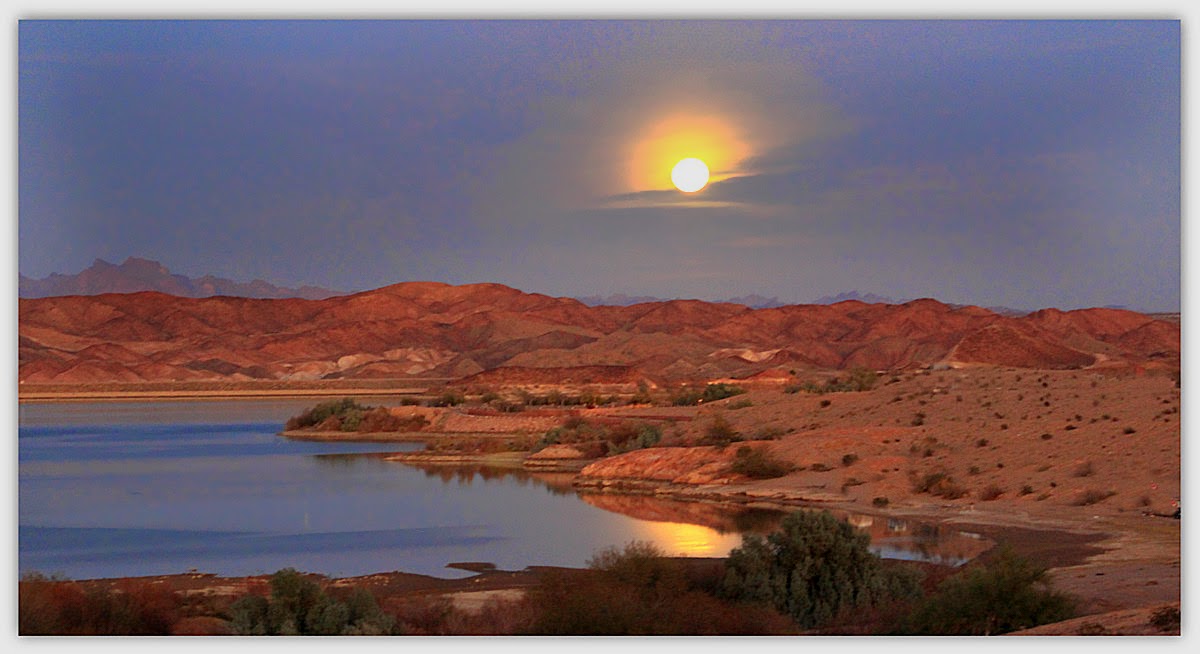 Apparently, there was a 4-point-something earthquake out here this past Sunday night around 7:30pm.  I guess it broke some water mains that run the water into the BLM.  If I did notice it, I must have thought it was the wind...but if I'd thought about it, I knew it wasn't windy at all that day -- or the balloon wouldn't have been on its voyage!

I think that about wraps it up for this post!  Hope you enjoyed the balloon ride!  I'll leave you with a few new landscape photos.

Make it a good week! 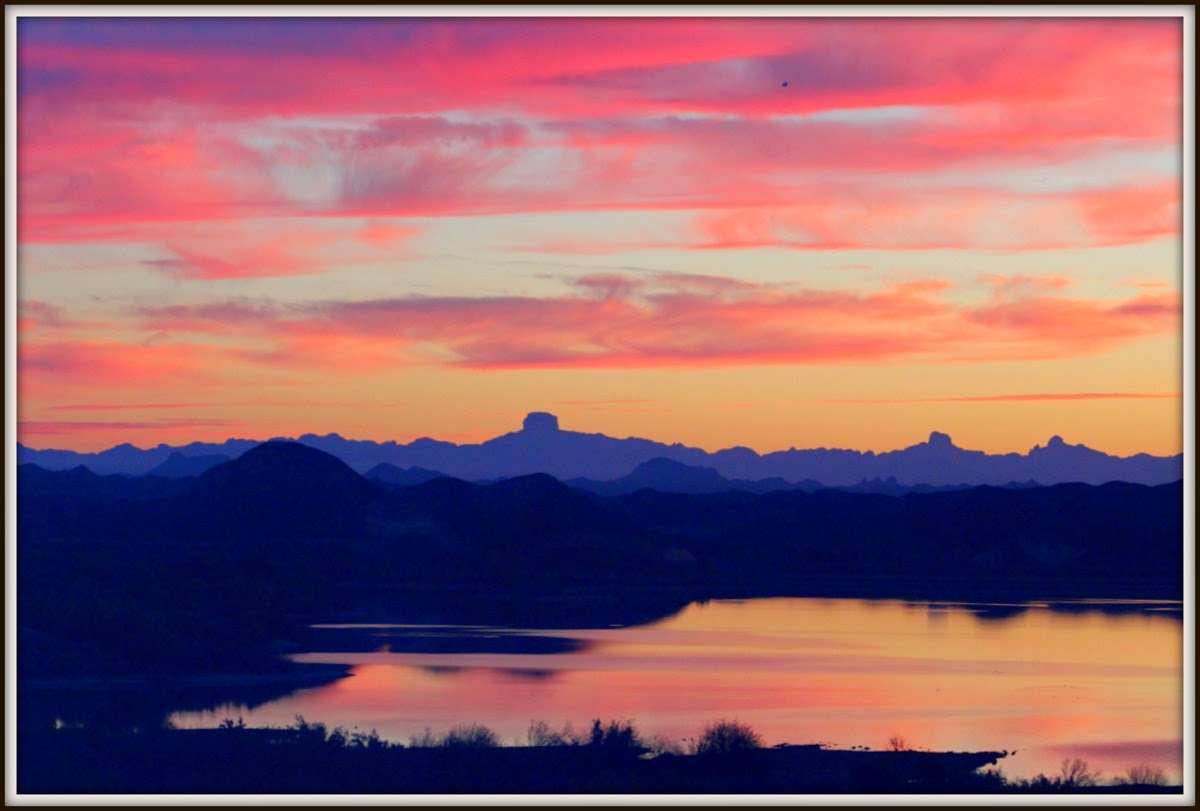 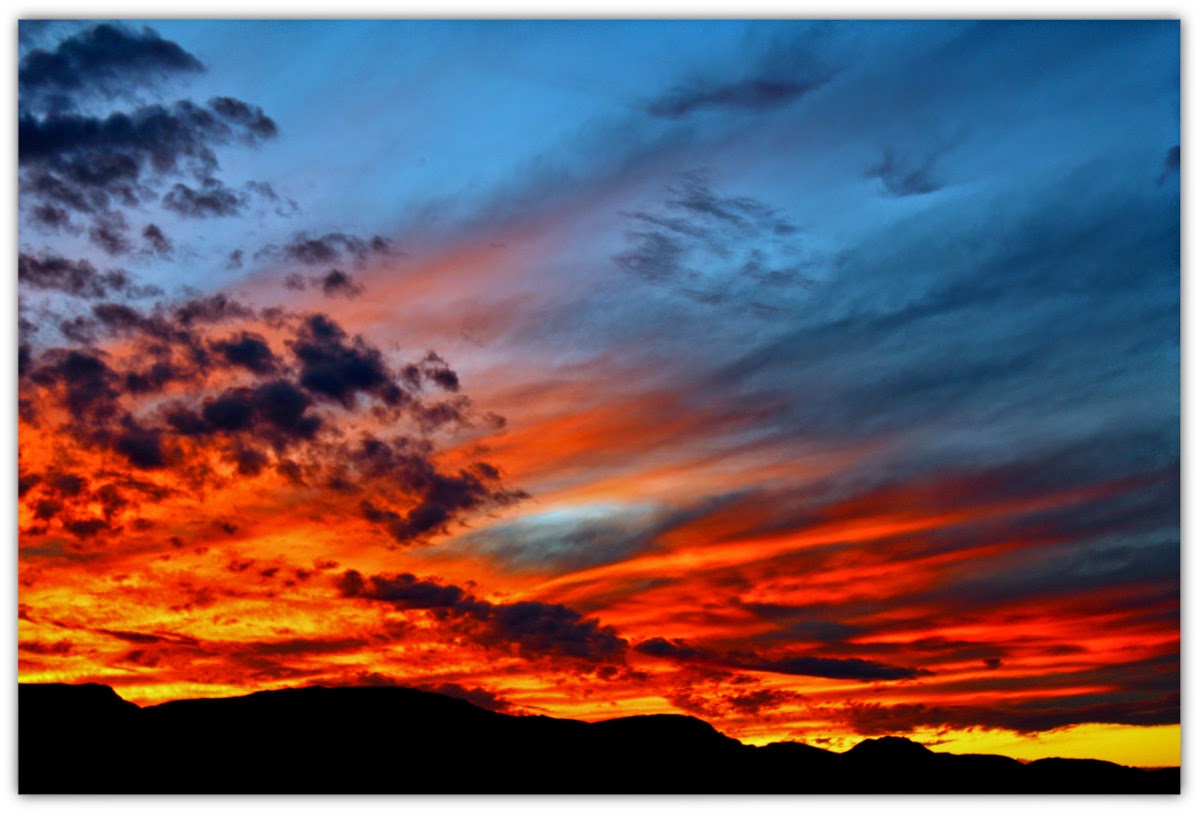