I’m not sure how I heard about this boondocking site - but I’m glad I did!   It wasn’t on my original list of stopping spots…it’s only about 45 miles east of our Flagstaff snow site.  On Monday, we followed the given coordinates to McHood City Park -- about 5 miles south of Winslow, AZ – yes, as in the song!  I was thinking, how can there be a “city” park out here?  I guess five miles isn’t that far, but normally you think of a city park as being right in the town.  Oh well.  All I was looking for was 14 days and free – you know my parameters by now!

Out Rt. 99 we came to the turn off for the City Park….pretty much out in the middle of nowhere….which was actually more to our liking than being right in town…especially if we stay two weeks.  We crossed a bridge and took the right turn into the park area.  Boy!  Did Winslow provide locals and visitors a nice place to take it easy!  Right on Clear Creek.  Water! 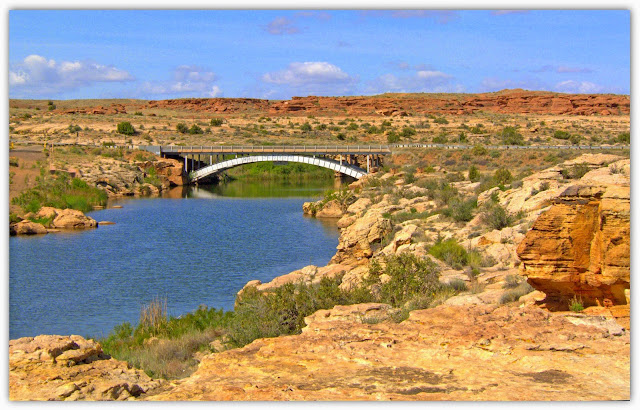 There’s a big pavilion for large get togethers….cabana areas…fishing…what else could you ask for from a city park? And it’s clean and well kept.  Well more than I expected! 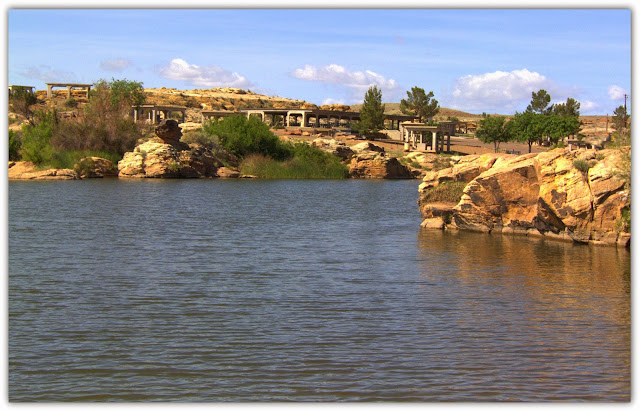 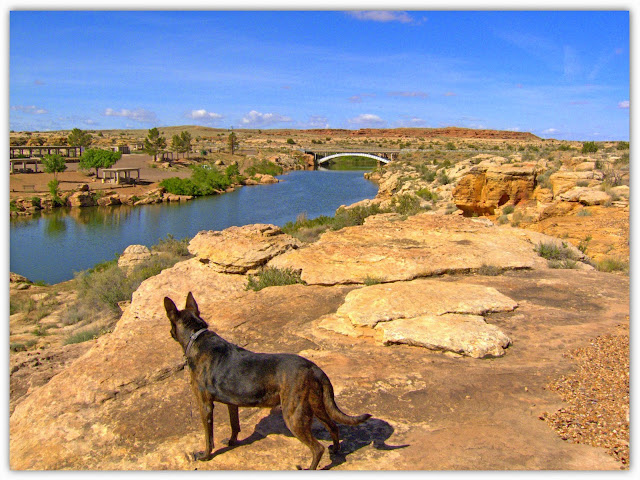 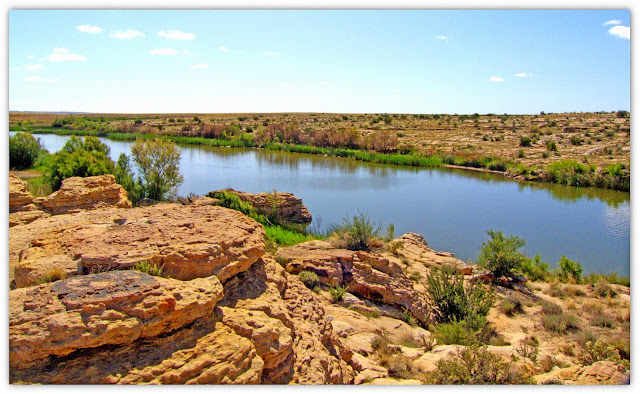 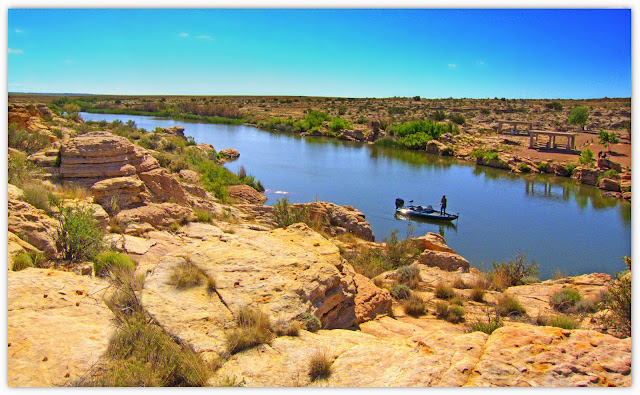 We make our way on down the lane looking for the camping/parking spots. I turned into the first area we saw and yes, there were some very defined sites - some paved - each with its own pedestal grill, picnic table and trash can…and restrooms nearby.  That’s all good!  There was only one other RV there…so we didn’t have to be close to anyone.  I backed into our spot and we jumped out to take a look around.  It’s nothing fancy, but it’s fine.  We walked over to a ledge a bit in front of us and SURPRISE!  There’s another section of sites, with the same amenities, just below where we parked.  Clear Creek meanders around and turns into a lake!  We’re moving to park right on the lake!  I turned the key and quickly reparked! 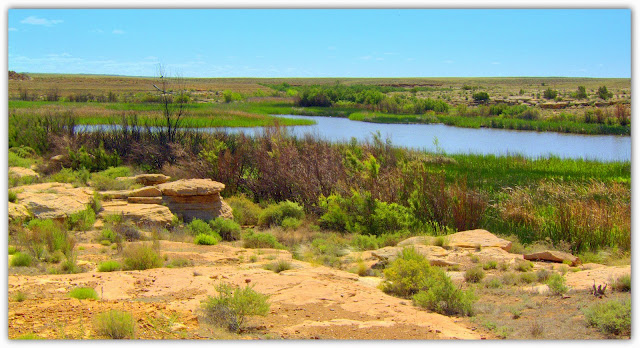 This is better than good!  And only one other RV positioned in front of the marsh area.  I maneuvered into a spot that easily accommodated being parallel to the lake and was very level.  And it’s on the outer most part of the “curve” of the area so my sitting area isn’t lined up with any of the other sites, if more campers come along. 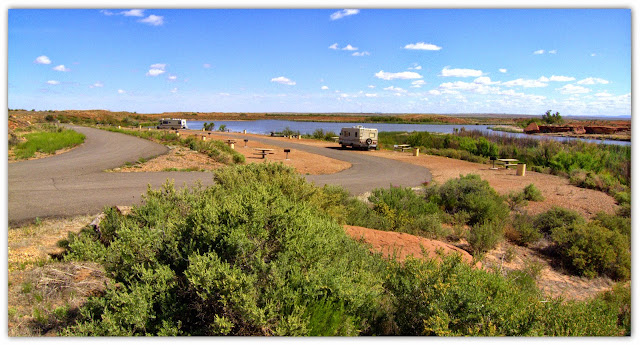 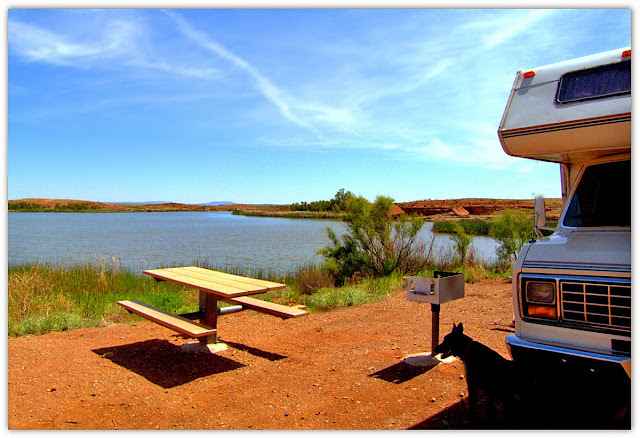 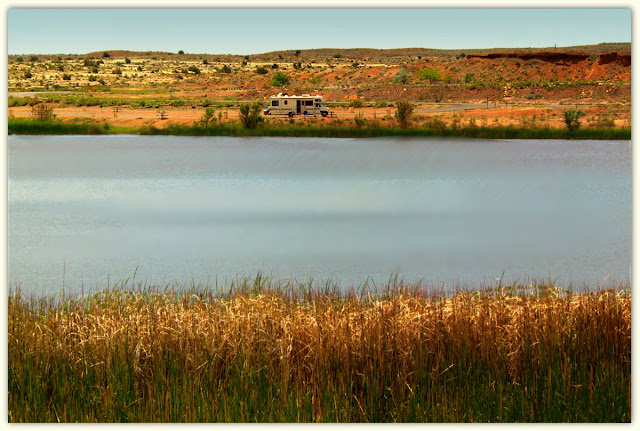 The City of Winslow really takes care of this park.  Very often there are crews (city employees plus some inmates from a nearby prison) out here cleaning the restrooms, emptying the trash cans, picking up paper, etc. that has blown around.  And, the lake was just restocked with trout!  There have been a few fishermen coming and going and they leave with a catch!  Too bad I don’t have a fishin' pole.

There is plenty of walking area here, which Nikko has enjoyed. You can walk around the lake and up the creek back towards the entrance if you want to go that far.  One day we went out and just as we got to the other side of the lake, a horse trotted out of nowhere….we weren’t expecting that!  There is private property around here…they must just let him wander around.  I didn’t see any fencing that lined up with where he came from.  I don’t think he was a wild desert horse…too big…just didn’t have the right characteristics. 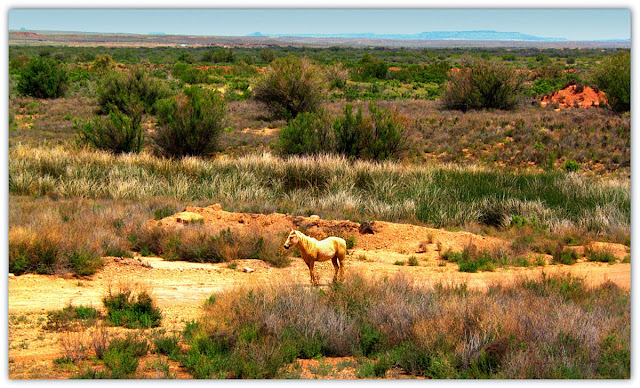 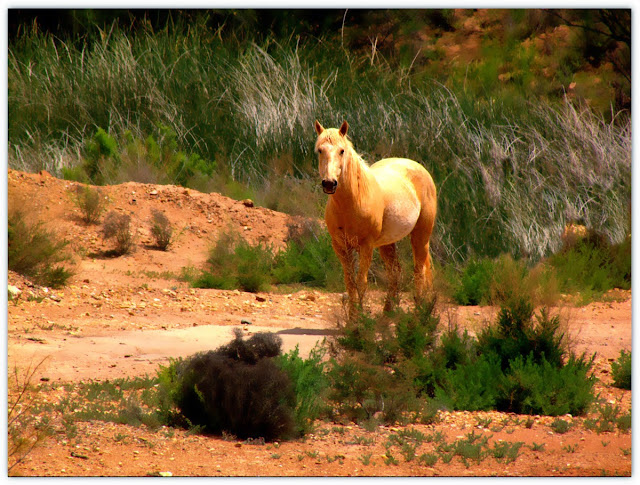 On our walk back, he was still grazing in the same area and off in the distance were two others.  They were behind fencing and looked much better groomed.  Oddly, Nikko didn’t react to the first one or these two at all.  Maybe because he had already seen the cowboys’ horses down at Sacred Mountain.  We were able to get pretty close to them for some good shots.  We've only seen them the one day. 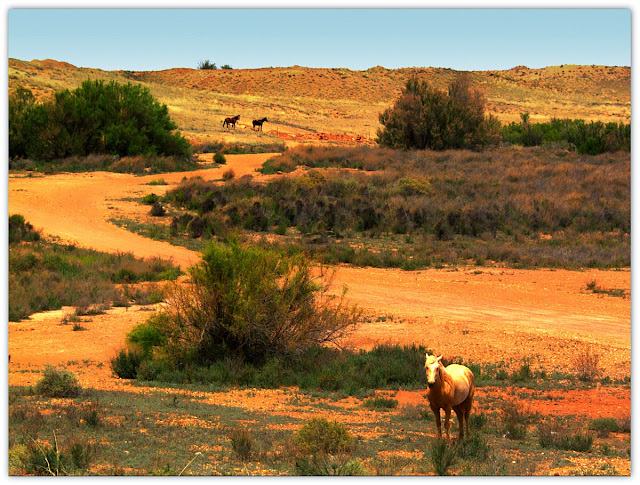 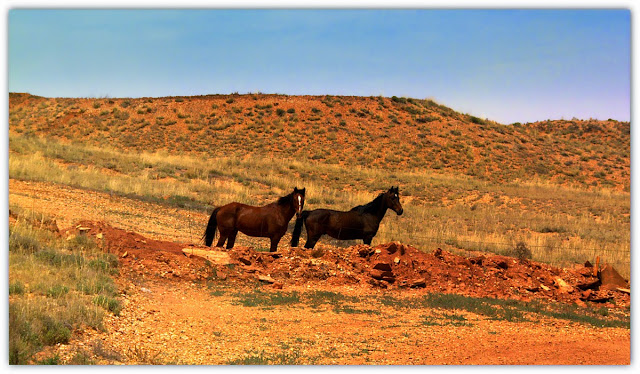 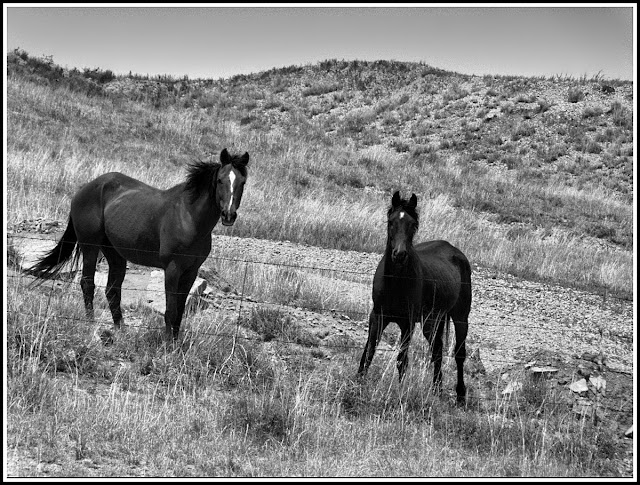 A few other campers have come and gone during the week…each just staying over one night.  One really nice couple was from nearby Prescott, AZ.  It was their first camping outing since the husband had triple-bypass surgery (twice! the first time didn’t work) in November, so they were staying relatively close to home and just out for a week.  With as many boondocking/camping spots as is around here, they don’t have to travel far to “get away”.  Another couple was from The Netherlands.  Really interesting and friendly.  Their son lives in Idaho and they use his truck camper to travel around the west for 6-7 weeks each year. We exchanged nuances of some of the differences between their country and the U.S….taxes, laws, etc.   I had made extra (really yummy) brunch-time burritos a little while before they were leaving, so I shared the extras with them. They were pleased and said they were better than going to a restaurant J.   In turn, they gave me some really delicious Dutch pastries called "stroopwafels"   Soooo good! You can get the real thing on Amazon, but, unfortunately, they are too pricey for my budget.

Another couple came in and plan to stay til the end of the month.  Also, really nice folks – from Sun City, AZ.  We’ve traded paperbacks, fruit, potato salad and fun conversation.  The guy in the end space who was here when I arrived is a full time RVer for years.  He looks kind of like a disheveled Jerry Garcia.  He offered to drive Nikko and I across the main road and back by the big red rocks to hike around a little….he had been over there before. He has a Jeep. Why not? 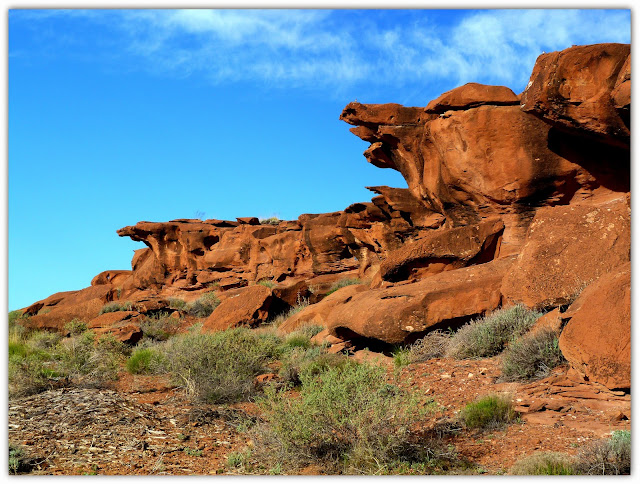 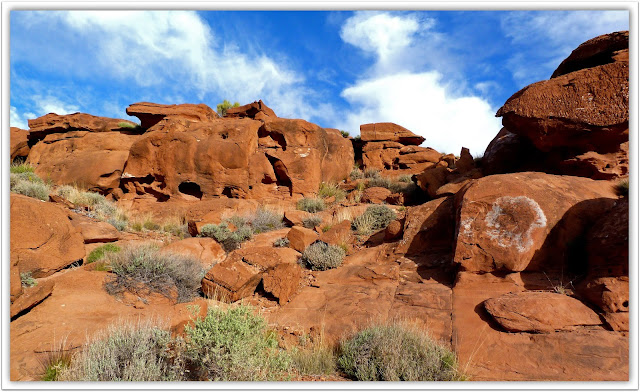 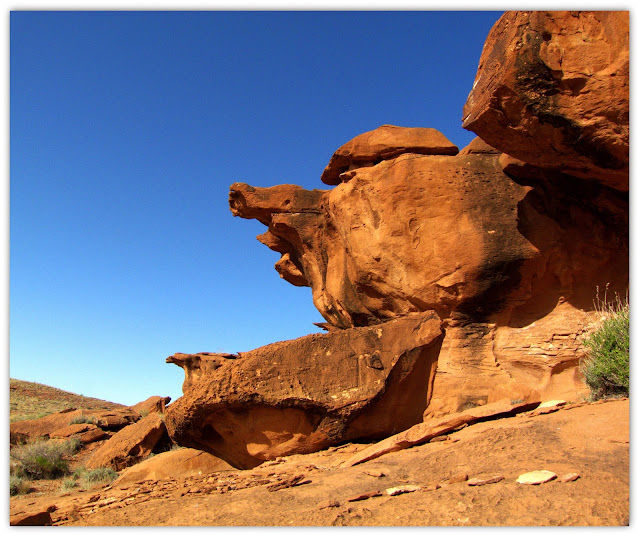 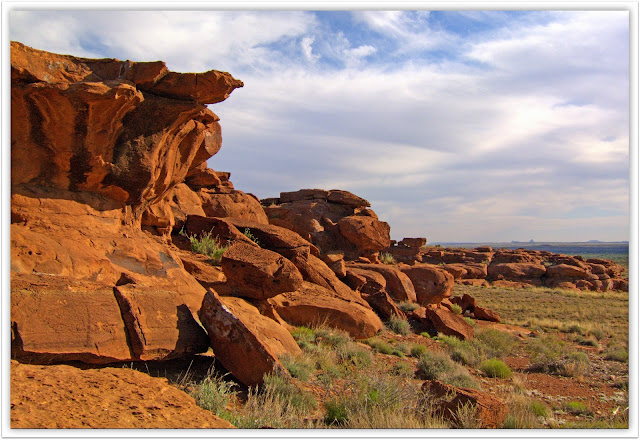 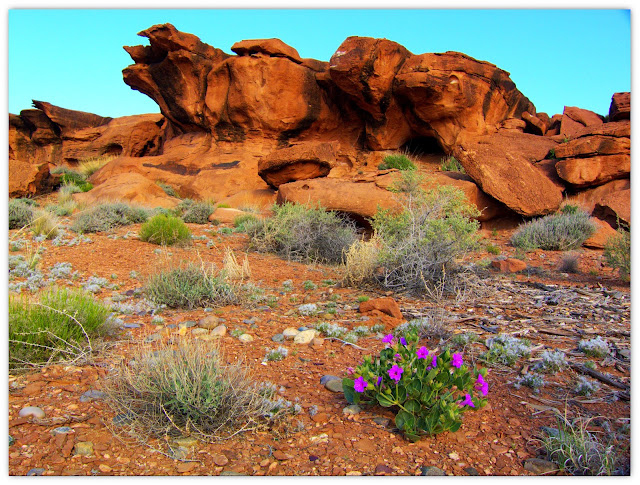 I found some old Native American scrapers…that was fun!  A city worker had told me earlier if I had a boat or kayak, petroglyphs could be seen from another part of the creek…and he had pointed across the main road toward the area we were exploring.  So finding the scrapers was in keeping with the knowledge that this area had been an Indian settlement at some time. 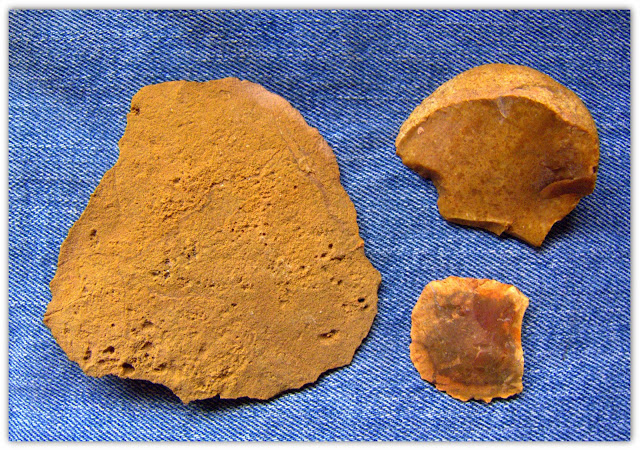 The red rocks offer different scenery/terrain than the lake, so it was fun to walk around over there.  I don’t often take photos which include people but “Jerry Garcia”, aka Bobby, found his way into one photo.  He looks like an old prospector, I think…. 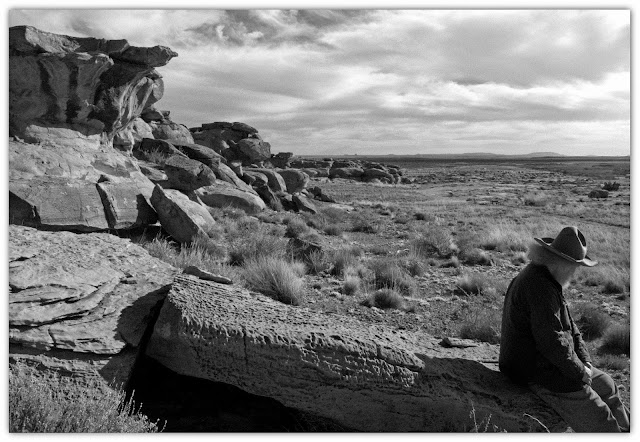 Nikko enjoyed running around out there.  He chased a rabbit for awhile.  I didn’t have to watch over him at all.  Jumping up out of the surface rocks were some pretty desert flowers…but only two small clumps were around where we were. 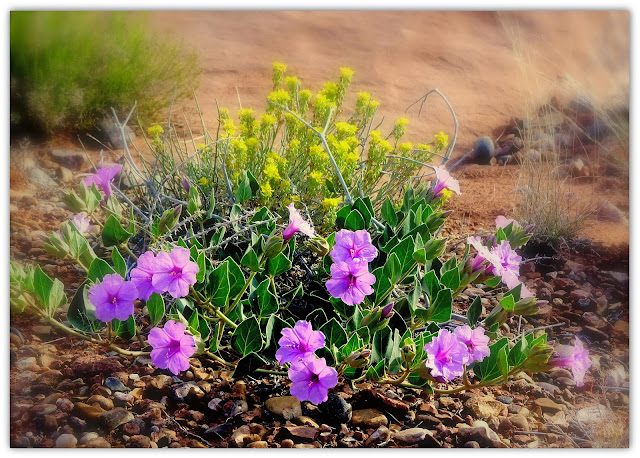 I’m not sure how long we will stay here at McHood Park…we have another 9 days before the time limit expires (eventho’ they don’t really seem to be checking it).  I have to wait for some mail to be delivered to the Winslow post office (via General Delivery) and filter in the Memorial Day weekend.  I’m slightly off my original “plan” so I’m researching (now that I have some replenished internet data time!) the next few sites as we get closer to New Mexico.  At least one more stop will be here in Arizona.  No rush to get anywhere!  There probably won’t be any more posts from here unless something unusual takes place.  The weather has been good…not hot at all… but no snow!  Several very windy days  -- mostly sun/clouds.  But, no matter, you can’t beat being “on the water”!

I rained pretty hard last night, but we could see it coming!  Clearing off nicely this morning, tho'. 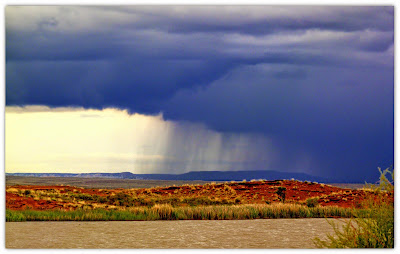 We’ve had some nice sunsets and sunrises… 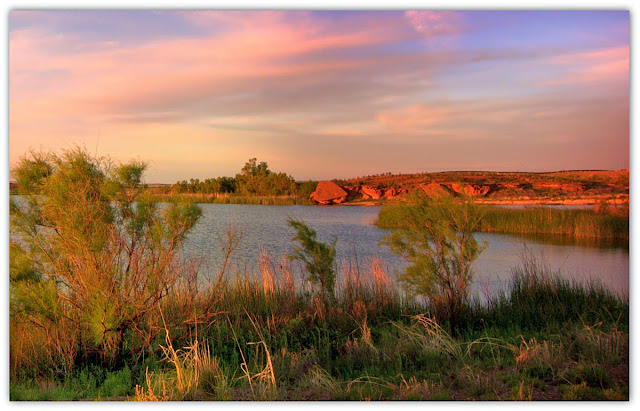 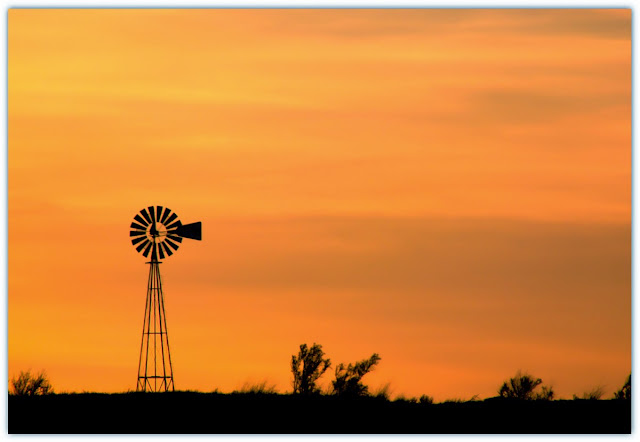 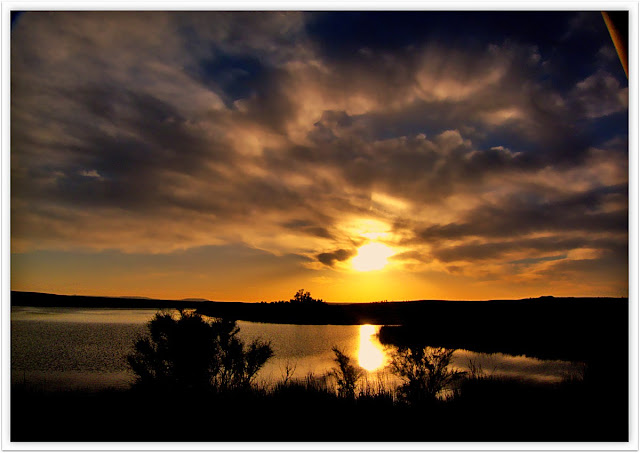 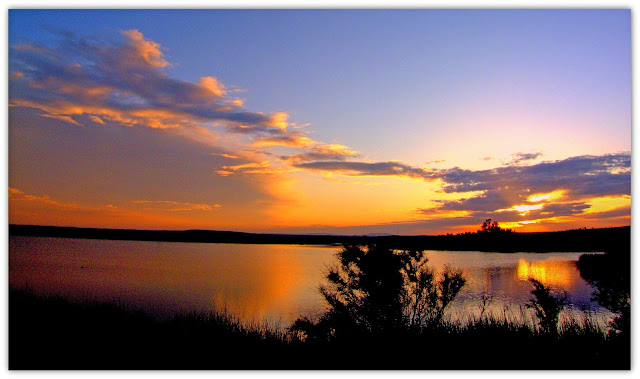 I made some herb beer bread this morning…. 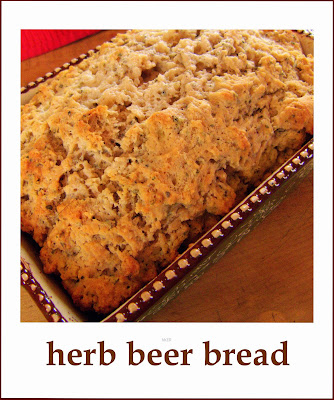 Here’s the recipe if you want to try it.  It’s fast – doesn’t need “rise time” and you just mix it by hand. 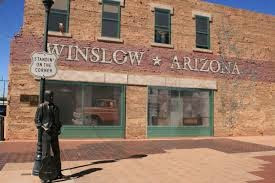 As always, thank you for shopping via my Amazon link!  You pay the same -- I make a small commission to offset the costs of publishing this blog.
Link to Amazon!
Posted by Travelin' Tiff at 9:51 AM