Before we make something happen around here, I'll show a few random shots of the "here and there"....


We had another beautiful full moon this month...the "Wolf Moon" on the 23rd.  Ironically, that was the first anniversary of the day I rescued Nikko from the Phoenix shelter.....where....his name was Lobo -- which is Spanish for "wolf".  I find those coincidences fascinating since I'm not one who totally believes in "coincidences". 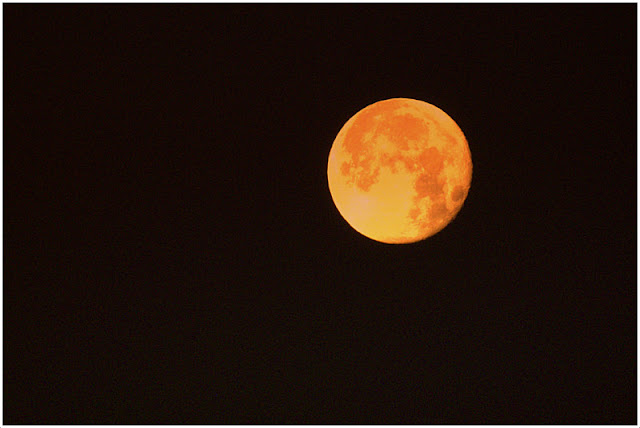 As the moon is rising over the reservoir, it is truly bright orange...then it fades to white, but still beautiful... 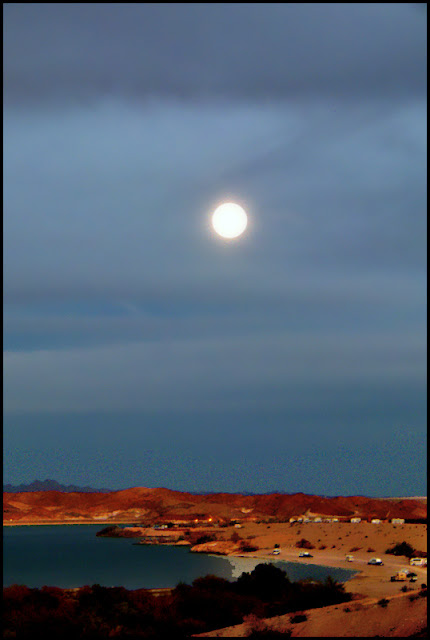 I got up early enough the next morning to catch it going down behind the mountains out past one of the main camping areas....the opposite direction of the sunrise that was forming over the reservoir. 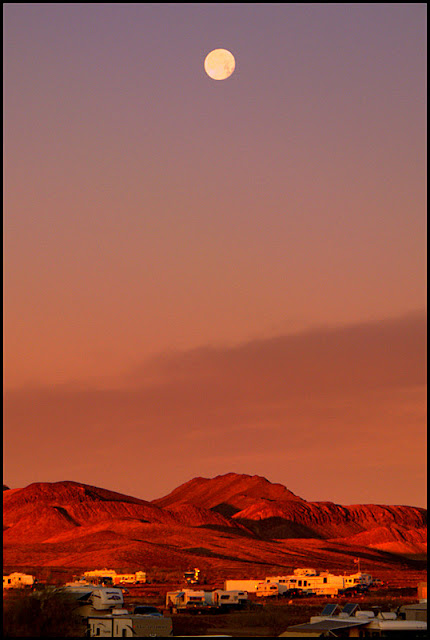 The weather has been IDEAL!  70s -- today 82*!  Really perfect....at least for me!  BUT, there's a twist coming.  Strong winds tomorrow and Monday....up to 50mph gusts predicted.  No fun!  It's already getting a little breezier than it was this morning playing golf.  THEN, the temps drop into the 60s for 3-4 days.  I know...that doesn't sound very cold compared to lots of areas of the country, but when you're used to warmer, it feels pretty chilly!  But, by the end of the week, back into the 70's. Soon enough we will be complaining about the heat!

It's been so nice, there has been some sailing on the reservoir.....can't beat that for January! 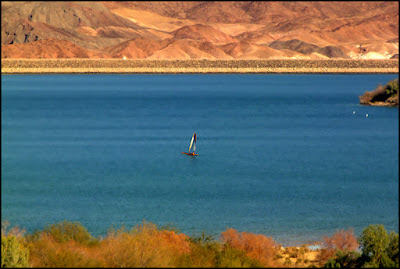 I was sitting here the other day thinking, "I've met a lot of people here over the past two winter seasons....but how many?"  So, I wrote them all down.  Without being, or even trying to be "Miss Campground Socialite", I know 70 people here by name!  Most of them are repeat campers here. And there's probably another 5-6 I know by sight...waving as we pass each other.  I attribute this to everyone being so friendly and the fact that we all have RVing and boondocking in common.  It's easy to strike up conversations!

One nice fellow, Gerry, let me borrow his car on Tuesday to go into town for all the dreaded errands. What a luxury!  So much easier to drive a car than to navigate a 30' RV around town!  I was very grateful!

I would say there probably won't be a lot more RVers coming here to the Imperial Dam LTVA this season.  Here's the view from my house, looking west (east is the reservoir).  It may look a little crowded, but there's actually a lot of room between campers...except for those who choose to be near others.  As you can see, no one is near me.....but Nikko and I like it that way!  :-) 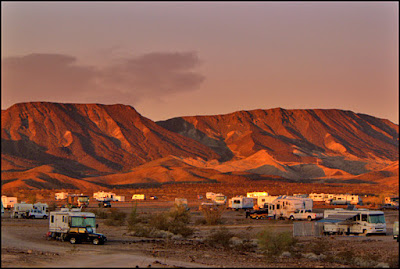 Thursday started off with a beautiful sunrise.... 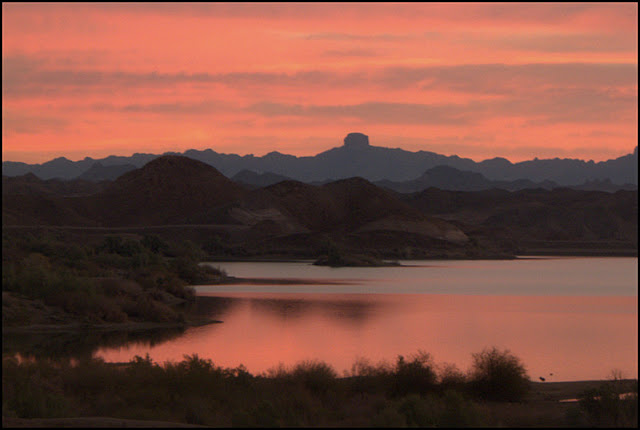 Five of us gals decided to make something happen and take a little trip down to Los Algodones, Mexico...about 50 minutes away. Myself, Dotti (from NW Arizona), Sue (from Rochester, NY), Phyllis (from Alaska), and Irena (originally from Czechoslovakia, now from Canada)....see how easy it is to meet folks from everywhere? :-)  My third time down there this season but I hadn't taken too many photographs.

As typical of Mexican wares, everything is very bright and colorful!  Most items are made in Guadalajara and Mexico City, but some are handmade by locals. 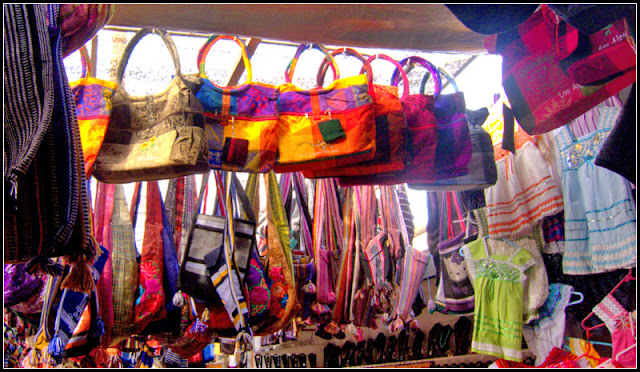 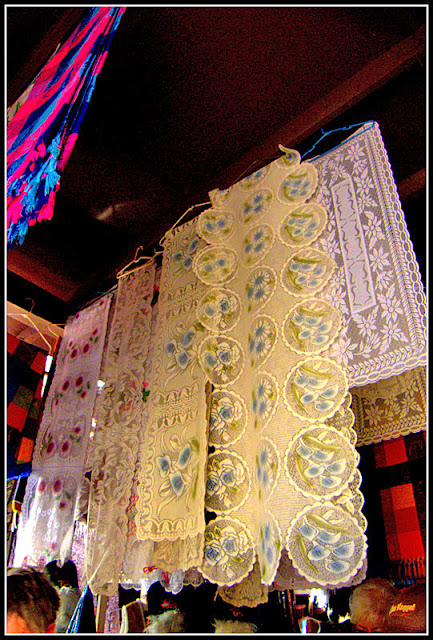 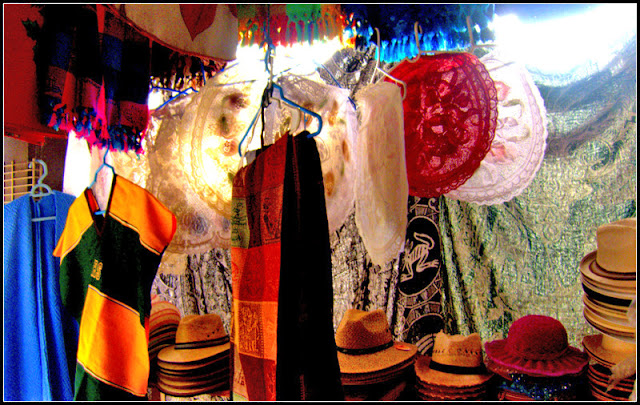 There's a lot of USA football "everything"!  But I didn't see too many Broncos and Panthers items....probably sold out already for the upcoming Super Bowl!

The gals were trying on some really nice capes....and ultimately two were purchased....started bargaining at $35...ended at $20, I think.  The vendor (in the purple parka in 75* weather) said they were acrylic, but I was really thinking "wool" as they had that wool feel and some had a moth ball aroma.... 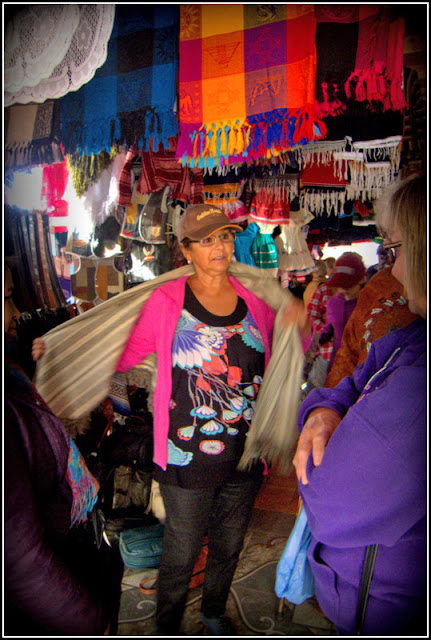 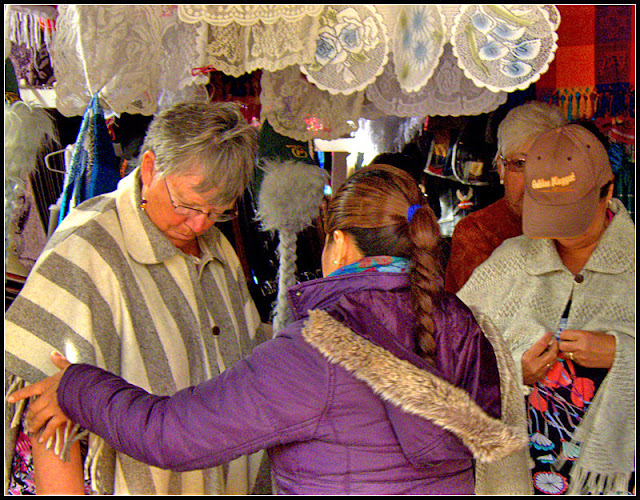 This fellow is hand-weaving...to order.  I can't tell you what is is weaving because I
am giving the item as a gift to someone who just might be reading this blog!
It was amazing how quickly he could custom make this little item!
I'll show it to you in an upcoming blog! 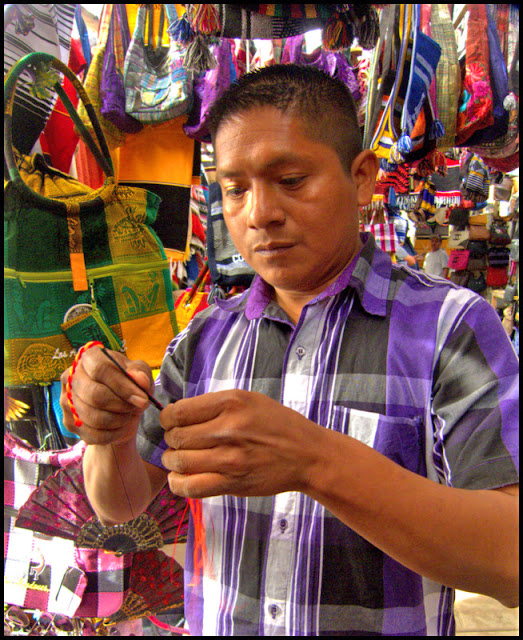 Of course, there is a lot of jewelry to be had!  Irena purchased pretty earrings, two necklaces and a bracelet.  Dotti scored a very nice bracelet with inlaid stones.
You have to watch what you're buying, tho'.
Make sure they are stamped ".925" somewhere...that indicates sterling silver. 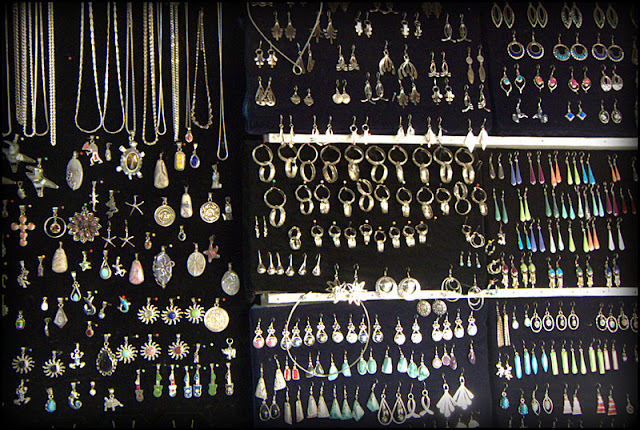 These fun signs are pretty clever -- made from old license plates!
I'm partial to the third one.... 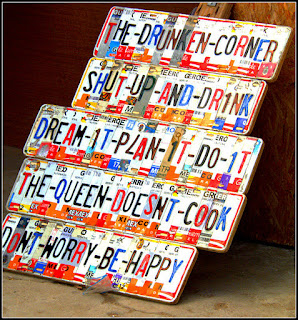 One very pleasing surprise was this Native American musician.
He was very talented and his music was wonderful.
I wish, now, that I had gotten a CD.  Hopefully he will be there when I visit again. 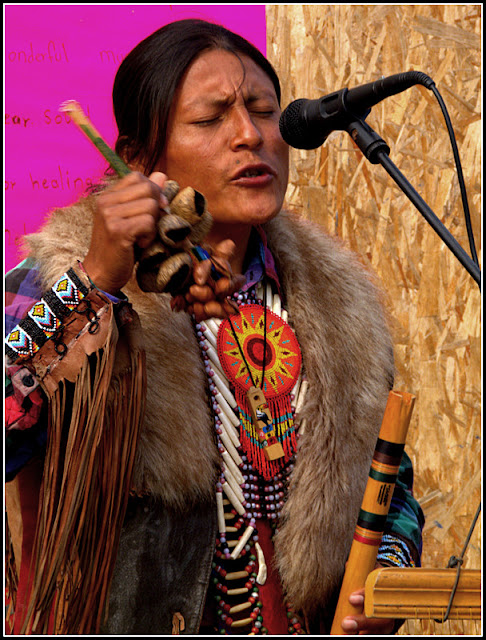 There's one walkway at the edge of the shopping area that seems a bit more "refined"...
Plenty of pottery and metal sculptures...
I am presuming these items are the more pricey of wares. 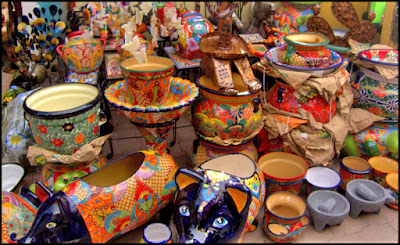 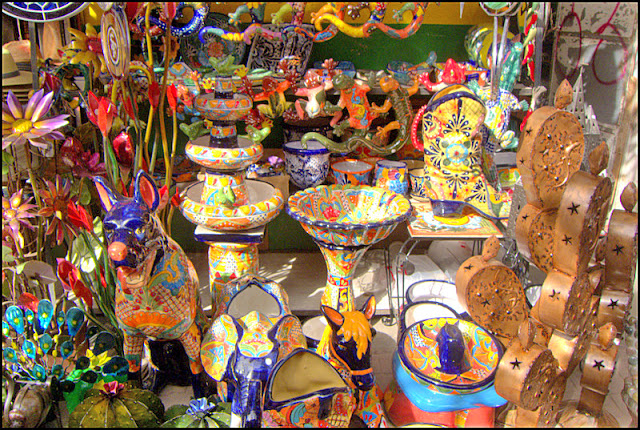 Oddly, when we were in the customs line re-entering the U.S., ceramic turtles, of all sizes seemed to be the purchase of the day for many!  We all thought that was pretty funny!

Last but not least, hunger set in and we went to the fish taco stand.
Two fish tacos for $3.00! And they were good!
We took them to the "square" where we could sit and order a.... 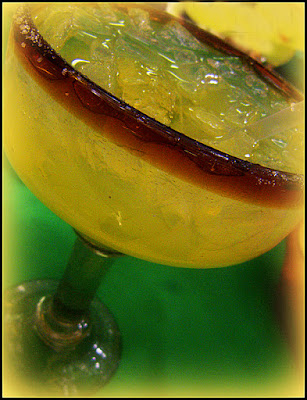 MARGARITA!
What better way to end a day in Mexico?  Ole!
All in all, it was a fun day with the girls!
We made something happen!

Time to think about Valentine's Day gifts.
If you can't shop in Mexico, Amazon surely has the perfect gift!
Thank you for shopping via my Amazon link!

Adios for now!  Everyone have a great week! 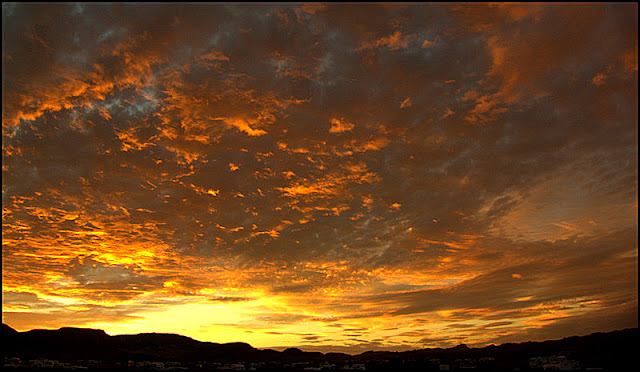