Mumbo jumbo!  That's what I could have been posting for the past few weeks, but I decided to NOT clutter up your inbox with a lot of "talk just for the sake of talking"!

Not a lot has been going on around here.  If you think of your own lives, especially now that the holidays are over, routine sets back in from day to day.  Get up, have some coffee, get organized for the day, go off to work or errands or appointments, maybe do some cleaning and laundry, pay bills, check emails and Facebook for all the exciting things happening in other people's lives, prepare some meals, relax a little with a crossword or book or hobby, then it's off to bed to get ready for another day. Well......as I've mentioned several times before, full time RV living is not so much a vacation as it is just "normal" living, like everyone else.  All of the above fun filled activities (or NOT!) are exactly what I've been doing since the first of the year.

I think it's important to remind everyone who may be considering this lifestyle that once the "vacation mode" wears off and you really feel that your RV is your home, like any other abode, and you settle into a spot for a week, two weeks, a month, or several months (like "snowbirds" do), life is pretty much routine a lot of the time.  But, that's not to say it's not a good thing!  It is!  :-)

So, now for some RV mumbo jumbo!  LOL!  First, the weather....always a fill-in-the-awkward-there's-nothing-to-talk-about-moments!  It was pretty chill in December and the first part of January, but it's definitely changing now into the reason I stay here!  Perfect! 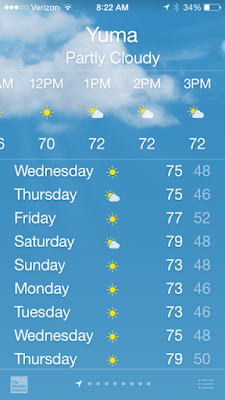 I've been living without air conditioning since just after I started this adventure in June 2014.  It was working when I started, then it just "went out".  A few people suggested it may be the compressor as it was getting power, but nothing happened when I turned it on.  Ok.  I'll live without it.  New units are not inexpensive.  The problem with that has been 1)  it can easily get too hot for Nikko and 2) it limits where we can travel during the warm, summer months.  Trying to stay in higher elevations has been the objective.  Soon after arriving here at the Imperial Dam BLM for the winter, my generator stopped working all together.  Not good!  I try not to use it very often, but it is still a necessity.  So, into the shop I went and spent $600 on a new voltage regulator.  Not money I wanted to spend!  But a new generator is $4000-$5000.

Where is this discussion going??  I was talking to neighbor the other day and mentioned my A/C hadn't been working since [almost] Day 1.  Because I knew (from a test) that it was getting electrical power, he said, "Well, maybe your generator isn't surging enough power for it to actually turn on the A/C."  A LIGHT BULB BURST ON IN MY HEAD!  (Which doesn't happen all that often!) 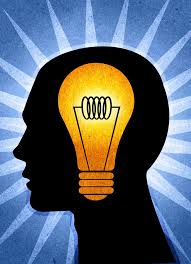 Of course!  With having had a faulty voltage regulator on the generator, he could be right!  I hadn't tried turning on the A/C since I had it replaced. And right he was!  I raced back to the RV, turned on the generator with the new voltage regulator....then turned on the A/C......VOILA!  COLD AIR!  So, until the generator went totally out, for 18 months I had been able to run low voltage things through the generator (which didn't tell me there was a generator problem), just not high voltage, like the A/C. Now our summer can take a whole new direction if we choose!   AND that $600 was well spent!

Speaking of summer, I've been running things through my head about where we might spend our time.....maybe Utah, maybe California, maybe get up to Oregon....  it's all still up in the air, but I'm doing some research.  It really depends on gas prices and budget!  This is a relatively low-cost lifestyle, but it still costs money!  Still have a few months to make a plan.

Ok -- what else can I WOW you with?  LOL!  How about burrow sightings?  There haven't been many at all this year.  This momma and her baby were at the bottom of the steep embankment where I park (live!), 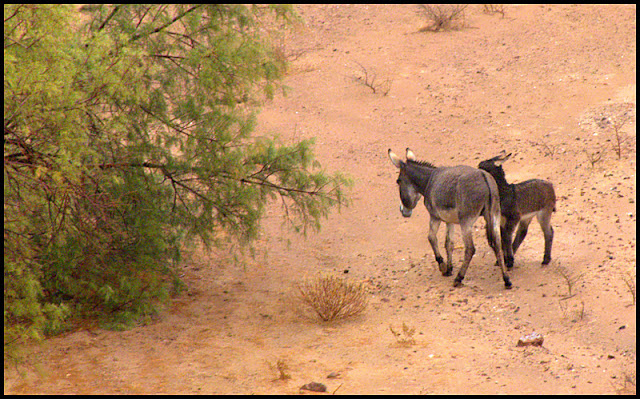 And there are the pretty views, which really isn't "mumbo jumbo"!  When the sun is setting in the west, this can be seen in the east. Always look behind you when you are viewing a sunset! 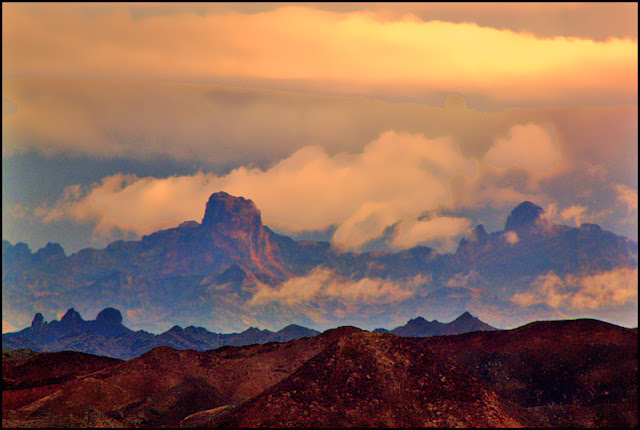 Then there are my new Nokero solar light bulbs!  These things are great!  You just set them in the sun for the day and you can  have hours and hours of very bright light at night (bright enough to read in total darkness).  There are variations of this style on Amazon, but they don't have the base...they are strictly for hanging.  These can hang or sit on a flat surface.  I ordered them directly from the Nokero website. I've also used them as a flash light when walking outdoors at night.  Love these!  I've been reading a lot of John Grisham lately....just finished Sycamore Row and The Painted House. Excellent! 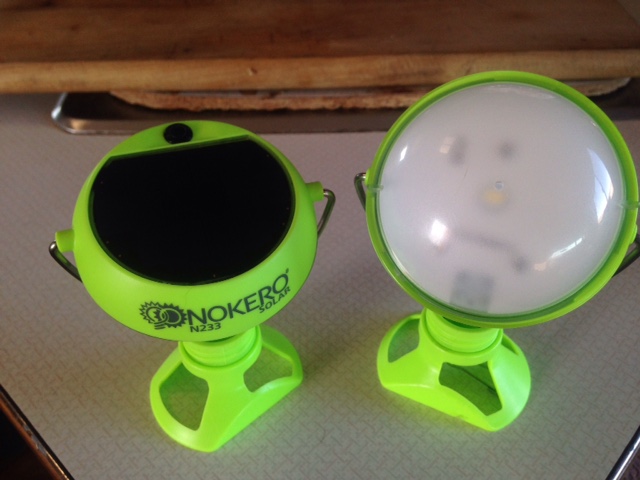 And maybe the biggest happening in January for me and Nikko is........it's our Anniversary!  In just a few days, it will be our One Year Anniversary together!  He's been great and he so easily adapted to this lifestyle.  He's gained a few pounds over the past year...primarily due to the all meat/protein food (Bil-Jac and Taste of the Wild) he's been eating.  He doesn't get a ton of exercise here because he has to be "on leash" all the time which keeps him from running all around and burning calories.  But, once we leave here and are at more secluded sites, I can let him run around on his own. 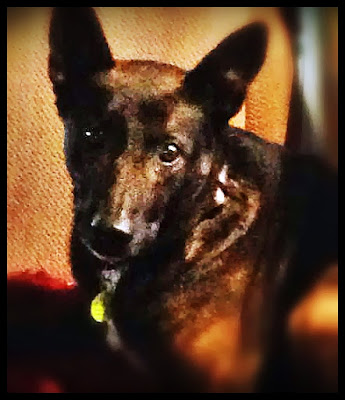 Let's see....what else.....Well, there's the GIGANTIC RV Show going on up in Quartzsite right now. There are hoards and hoards of RVers in a very small town right now!  You get to see all the latest and greatest of the RV world...new motorhomes, campers and trailers....plus all the "extras"....like solar and other creature comforts.  The big Rock and Gem Show will also be coming up soon.  There are lots of vendors of other types there, too. 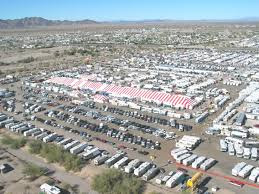 I think that's about all the mumbo jumbo I can come up with in this post!  Just enjoying the nice weather, good books, some golf, creating zen art, walks with Nikko, and of course, all the things that come with just living life --- bills, taxes, repairs, etc!

As always, thank you to all of you who have been ordering via my Amazon link!
It all helps keep this blog going!

Let's end with a great sunset photo!
What a spectacular flight this pilot had!
Have a great week! 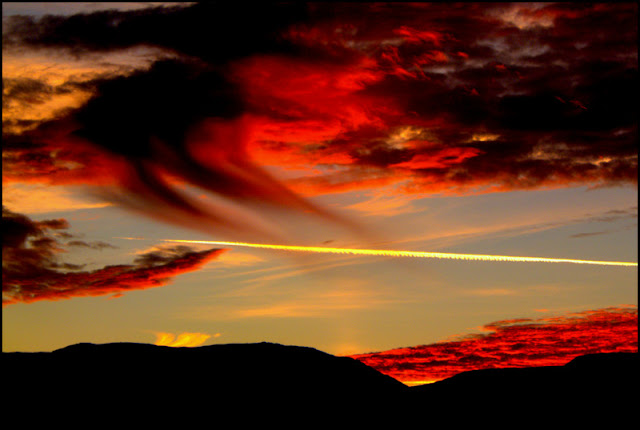