Hello, Hello!  Seems like a long time since I've posted anything, but all is well!

We left home base last Thursday morning, but before we get on with that, just a couple of photos from the end of our stay at Martin State Forest in Indiana.

A week ago Sunday...at  3:30 a.m... a big campground commotion!  I didn't see it all until Monday morning just prior to our departure. 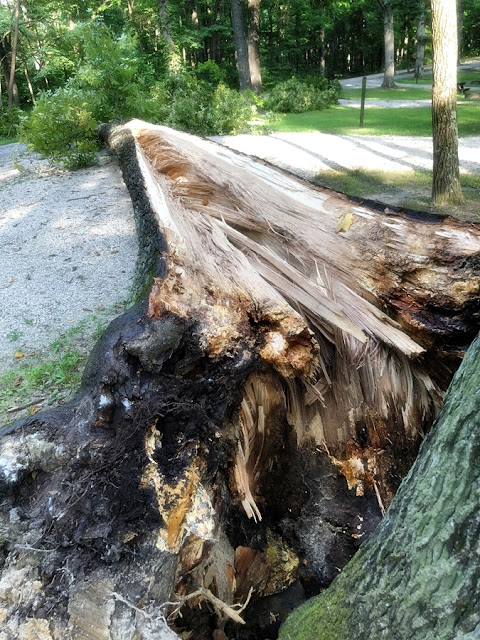 This huge tree fell right over two campsites and across the campground lane into a site with two tents and their car!  Thank goodness, no one was camping in the closest two sites, but someone had been there a few days prior.  But the luckiest of all were the tent campers.  Huge limbs just missed their tents and car by a few feet.  I can't imagine hearing this crash in the middle of the night!  There was no storm or wind...a perfectly calm night.  Someone called 911 and they sent out rescue workers with chainsaws to get the bulk of the tree and limbs cut up that blocked the lane.  Bo and I were the only ones at the other end, but we wouldn't have been able to get out.  So, at 4:00 a.m., things were hopping.  There was no way to see the condition of this fallen tree ahead of time.  It looked perfectly normal.  Just goes to show, stuff happens!  Even in the calmest of woodland conditions.

Ok....so we went back to home base for a few days and then headed out again last Thursday.  We ended up at yet again, another horse camp!  This time,

in the Hoosier National Forest 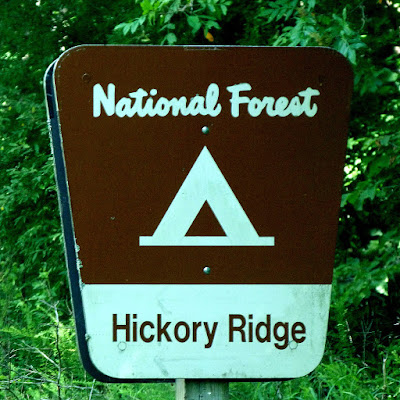 This is a small horse camp near a very large RV park for equestrians.  It has electric, water and covered corrals, plus sites large enough to accommodate very big horse trailers.  I've never seen an RV park for horses.....quite an enterprise for the land owners.  Anyway, Hickory Ridge Horse Camp is "primitive"....no hook ups or potable water and quite small. 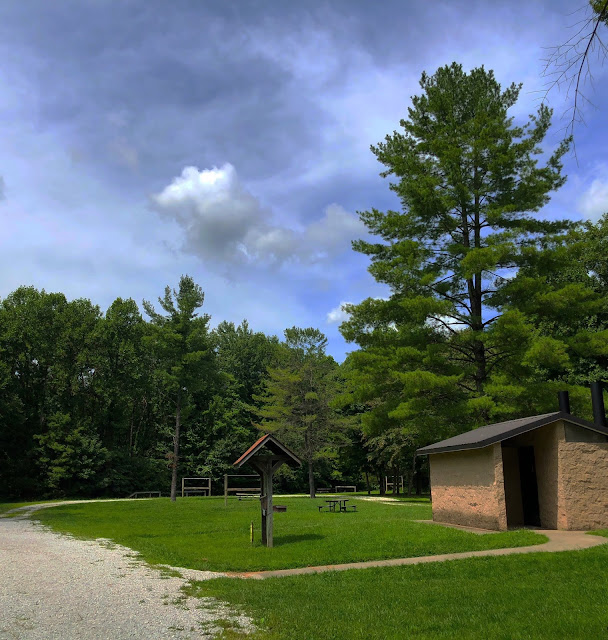 This is one end of the small loop....we set up camp at the other end....
no one else was there, so we had our choice of sites. 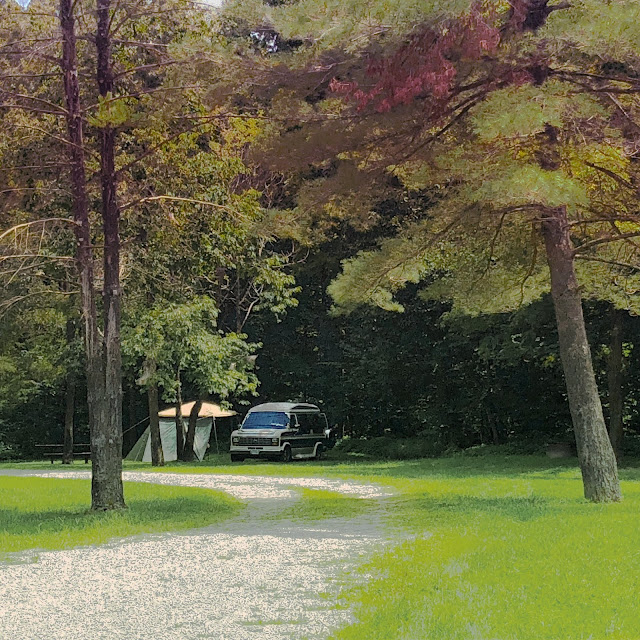 Within minutes of setting up, Bo takes his place as the supreme guard dog
just in case someone else shows up! 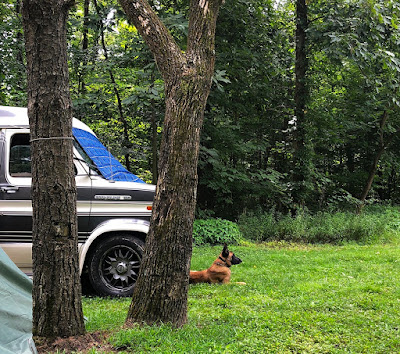 He didn't have much to guard until mid-day Friday.  A couple and their three young boys drove around the loop about three times.  And then, pulled in and stopped at the site right next to ours!  UGH!  Why that one? There were other good sites to choose from!  They got out and I asked them if they were here for some hiking......noooooooo.....camping!  The father acknowledged right away that they were more or less infringing on our area, but they are "hammock campers" and really needed the grove of trees right next to our space.  Plus, several family members were going to join them.  Oh fun!  For them, maybe....not so much for us!  I kind of nicely hemmed and hawed so they decided to drive around again, and also out of the campground, to see if there were any other adequate sites.  Of course, there weren't, soooooooooo........I said I would move.  They were very appreciative.  But, after all, I do this all the time....they don't get to go camping often, and they hadn't seen some of these family members for two years, so it was the right thing to do.  They would have trees and a huge space to spread everyone out.

I got everything together and relocated in about an hour, I guess.  The main reason for selecting site #2 was the shade factor. It was on the same end of the loop as the original site and the family. Aside from the original site, this area was the only decent site with shade.  The new site had shade but wasn't optimal...I got the van level, but my "living space" was on a slant as it was below the grade of the gravel lanes...and the site was right by the entrance lane....so three sides of the canopy had sides for privacy. But, it would do.  It's free! 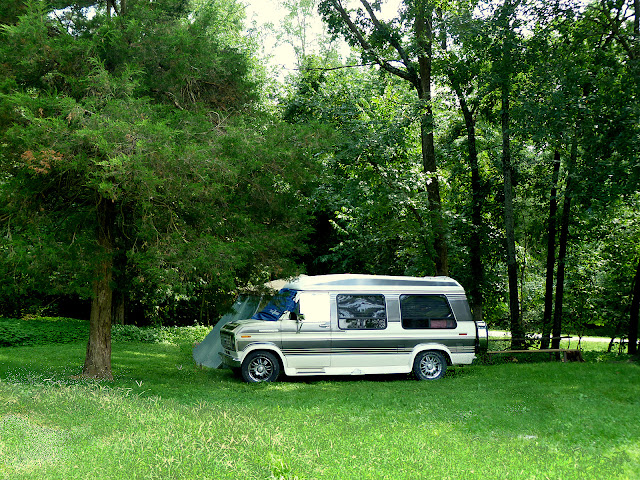 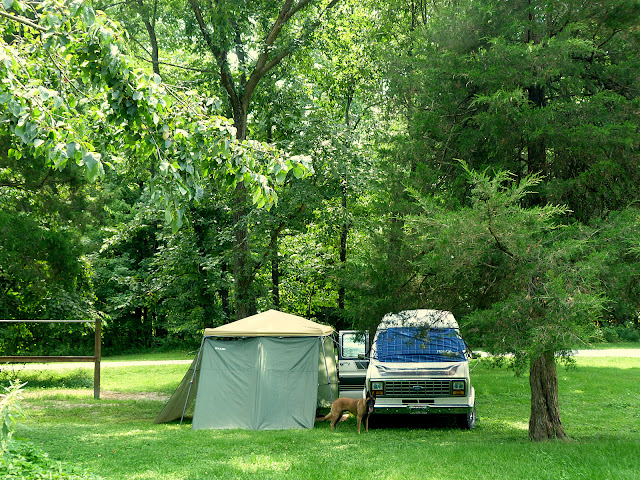 All was well until "the extended family" started rolling in on Friday afternoon.  They were trying to be respectful, but there were probably 8-10 adults and a dozen kids.  No matter how hard you try, "quiet" wasn't going to happen with that many people.  If you are wondering about horse people at this horse camp.....well.....there were a lot!  Not so much people camping here, but remember the big RV park I mentioned?  Evidently, some popular trails come right through our campground.  Why they all chose these trails was beyond me, because there were plenty of other trails that didn't intersect the campground.  The popular trail is in yellow....the one that goes through the campground.  Of course, the part that crossed the campground was very close to where we were parked.  Bo could hardly contain himself with all the horse traffic going by.

This was also a "problem" taking him for trail walks.  Riders appeared out of nowhere almost every time we took a walk.  Obviously, there was very little "off-leash" time for him except very early in the morning and very late in the evening.

Did I mention there was virtually no cell service?  It was so spotty it wasn't worth trying to deal with it.  I got a few "horse photos" but not many.  I was too preoccupied with keeping Bo at bay as they all trotted past our site!  Probably needless to say, between the family reunion, all the horse traffic and no cell service, Hickory Ridge isn't a spot we will try again.

They start them young! 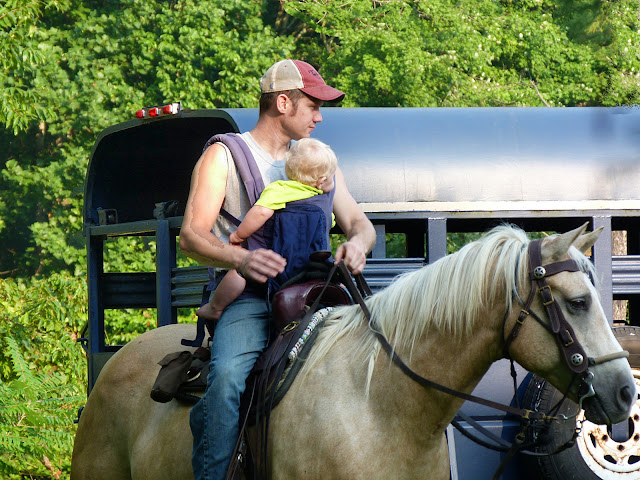 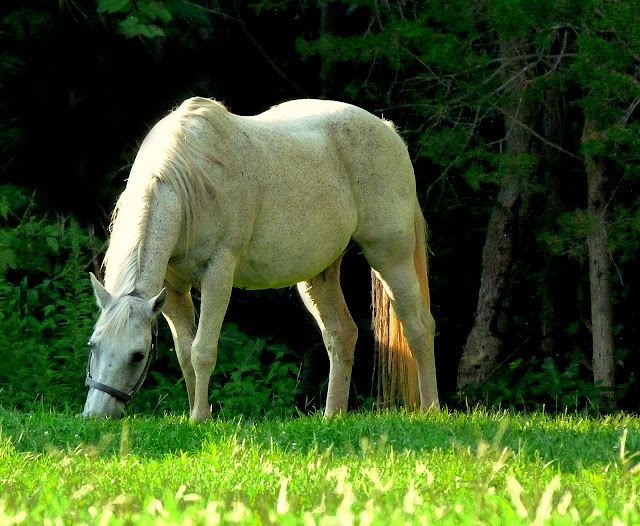 So....off we went.  After a stop at the Paoli, IN Walmart....the place I got "harassed" because of my University of KY ball cap - LOL!, I decided to head further south and revisit a familiar, very quiet campground.  More about that in my next post.

This is it for this post....not too exciting, but it was what happened at Hickory Ridge!  They can't all be perfect!  I'll probably be at this repeat campground for a week, so we will catch up later!


Have a great week
and thanks for joining me! 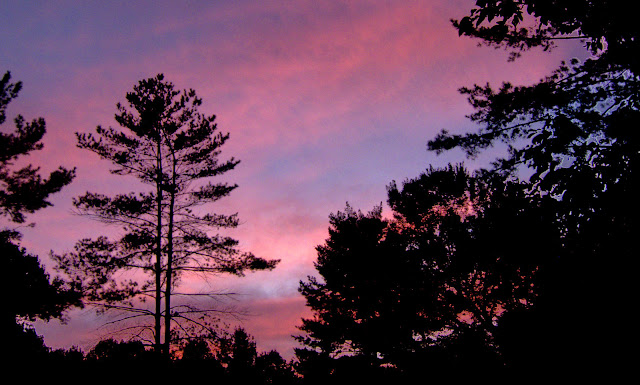