As you might remember, my last stop was in Show Low, AZ -- at Walmart for the night.  Not so exciting, but a necessity stop at the time.

Later that day, a Scottsdale, AZ friend of mine emailed me saying he owns a little place in Payson, AZ, which is currently vacant.  Why don't I park at the house if I want to come down to Payson?? Hmmmmm.....I did need some "city amenities" and it was only a 90 minute drive...and the area where we were was still calling for a lot of monsoon rains. More mud and muck?? Not so appealing!  So why not?? Free "boondocking" is free boondocking!  It's what we do!  :-)

So, Nikko and I made our way down to Payson last Friday....and it WAS "down"!  I didn't realize or just wasn't thinking, that we would have to come OUT of the White Mountains at some point.  And this was the point!  I've mentioned before that my RV doesn't like inclines and declines...but we were going to have to come down at some point.  Might as well be now.  It was quite a decline....from 8800' to 5000'.  But, overall, it wasn't too bad as far as driving.  I started slow, stayed slow and at the worst sections, down shifted to a lower gear.  Never felt the breaks getting squishy!

There were some beautiful views coming down, but needless to say, I couldn't do my normal "out the window" photography.  It was FULL concentration navigating the twists and turns.

Payson, with a population of about 15,000, and known as the "Event Capital of Arizona", is surrounded by the Tonto National Forest (and some tribal lands) - which I'll be researching for boondocking spots when I leave here.  It is almost in the geographic center of Arizona...and the area is known as "Rim Country" referencing the Mogollon Rim.  I need to get back over that way!


Interesting Info on the Mogollon Rim

Check out these photos

And at 5000', it has a wonderful climate...all four seasons, but none extreme.  It is generally 20* cooler than Phoenix, but only 90 minutes away.  Lots of visitors come up on the weekends to get out of the valley heat.  But I get to stay here....as long as I want to!  :-)  Payson is known as a destination for rockhounds and hosts the Oldest Continuous Rodeo every year... the third week of August.  It is a world-famous event!  That would be fun!   (Obviously, these are not my photos....) 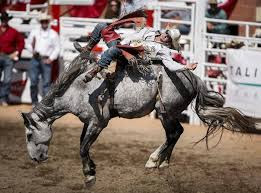 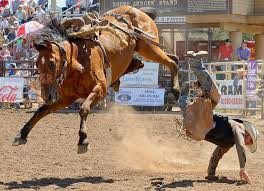 It is also the site of the annual Arizona State Championship Old Time Fiddlers Contest every September.  That would be fun, too!  Many more events go on here throughout the year.  So, there's a lot going on around here!  Here are a couple of links for more info if you are in the area:

Top 35 Things To Do In/Around Payson

The main thing that makes this stop a "Hilton stay" for us is the electricity is on at the house.  THIS IS A LUXURY!!!!  I have run an extension cord from the outside outlet to a power strip in the RV to keep all my devices charged and I can keep my Dyson fan on.  Nikko likes to lay in front of it as it does get warm in the afternoons....but it's very cool at night...don't need it then.  I've also been able to make some crock pot meals and do some other things that require more electricity than I can produce out in the forest.  There's 300 days of sun here/year so I have plenty of solar power, too...just to be sure my coach battery is always charged for the lights, refrig, etc.

The other luxury is I can walk to two main shopping centers which include Safeway and Basha's (my favorite!) grocery stores, a Big Lots, Petsmart, and other smaller retail establishments.  Can't do that from the forest!  We took the RV out yesterday - Errand Day - and got a lot accomplished in just four hours...and virtually no stress.  Jiffy Lube, Basha's, Laundry, Propane, Tire shop for air, RV wash, Petsmart, Health Food store, a local farmer's stand and the Post Office.  All, almost at our fingertips....and either on AZ 260 or the crossroad, AZ 87, just 1/2 mile away.  Easy peasy!  And the people here are sooooo nice and helpful!  (Thanks, Brian, at Big O Tires! and the guys at Jiffy Lube!  and the Toad's Farm stand! )

Another great feature is, as it just so happens, the houses on all three sides of my friend's house are also vacant right now! So, no neighbors!  Just like in the forest!  LOL!  Even if there were people living there, the way the driveway is situated, I would have 100% seclusion from them anyway. AND the yard is totally fenced for Nikko....so he can just come and go out of the RV at his leisure. SPOILED he will be!!

AND, did I mention the great radio station I found?  KRIM 96.3.  Super station, with virtually no interruptions playing only the "classic hits"....not the so-so songs that somehow got popular in the late 60's/early 70's, but the good ones.... Traffic, Hendrix, Roy Orbison, Jesse Collin Young, Moody Blues, Led Zeppelin, The Doors, Clapton, Allman Brothers.... yes!  Well, at least they were my favorites back then!  (I'm giving away my age!  Oh well!)

Lots of "wins" for me, for sure.  The "win" for my owner friend is, I am clearing out all the weeds around the property. and sweeping down the outside cobwebs, etc.  Due to an elder care situation, he doesn't have much time to get up here.  So, I'm helping out with that as I can. (I only have a child-size broom and rake! It's funny!)  This is just like "workamping"! But no boss!  Here's a 'before' and 'after' of the back yard area.  It's actually a gardener's dream...the soil is great...and the little terraces....perfect!   There's a little fire pit and fountain/koi pond area in the corner. (I sound like a realtor!)  Anyway....it will be a help to him in exchange for a little electricity.  The driveway needs some help, too....my next project! 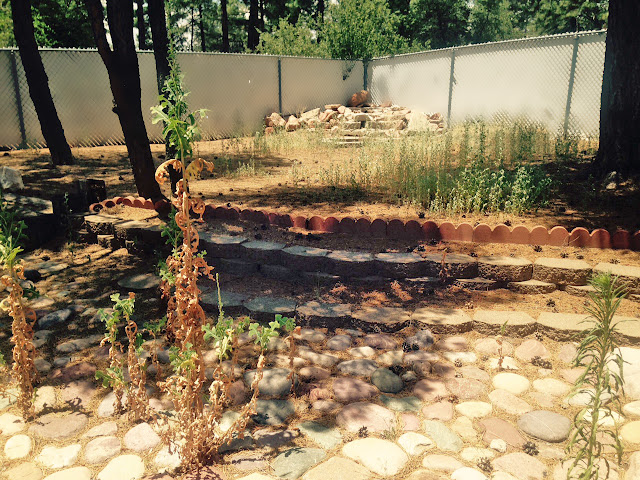 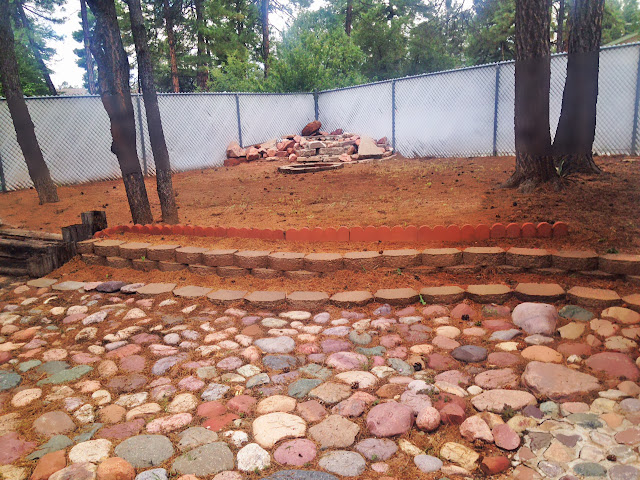 I'll probably be here for awhile....but, really, I'm just not sure how long....will just play it by ear. Since there won't be any "scenic views" I might do another post on photography tips...or something yet to be thought of.....while I'm here.  If you have something you would like to know more about regarding this lifestyle, just ask!


The moral of this story is......if you are a full time RVers, or those just starting out and want to get the feel of "boondocking" without going into the scary forests.....don't forget your friends!  Very often they may have an area on their property...or a driveway....where you can park for awhile -- with or without an electricity option -- it doesn't matter. (If you're just starting out - don't use the electricity! You have to learn to live without it!)   I could stay here just as easily without the hookup....I've been doing it for over a year!  They may want a house sitter while they are on vacation. Trade space for some work around their place.  If you don't have any specific plans to be somewhere, look up your friends across the country!  You may be in for a welcome surprise...and help them out at the same time!

Thank you for shopping Amazon via my blog links! Appreciate each and every order! 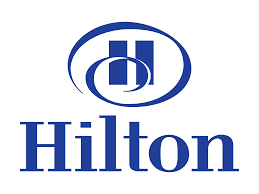