I think I left off not knowing where I was going!  Well, after driving through some pretty scenery...
.... 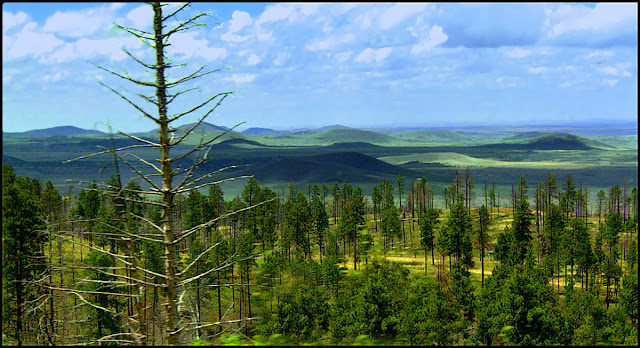 I ended up on AZ260, knowing there were several forest roads along that road.  At that point in the [late] day....and I don't even remember what day that was.....maybe Friday??  I pulled off onto almost the first forest road I came to and then, into the first site I came to, right on the road.  I knew it would just be for overnight, so it didn't really matter much.  Well, it was a mud pit!  And it was raining a bit off and on.  BUT, with rain and sun comes....rainbows!  I just happened to look out my back window to see how deep the muddy areas were so I could be sure I could get out and I saw this: 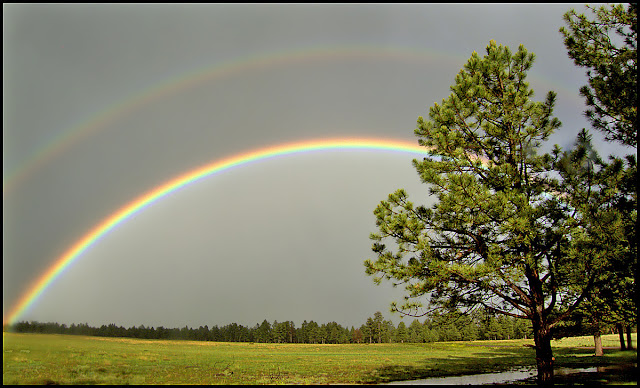 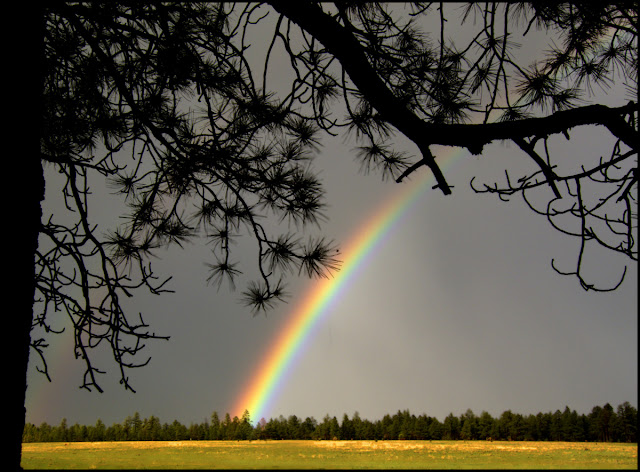 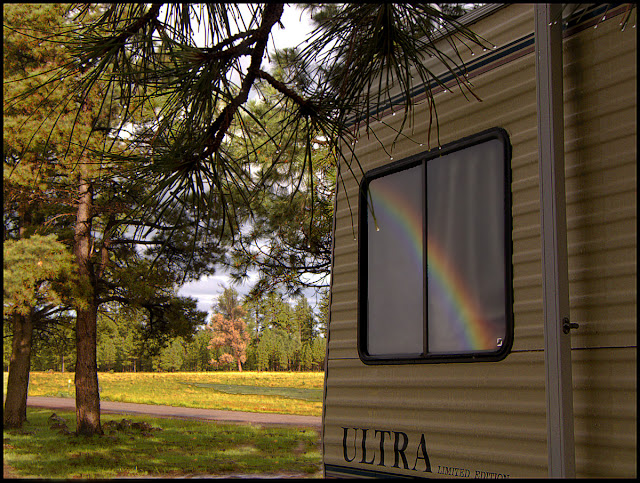 A spectacular double rainbow!  That made up for the gloppy mud I was sitting in!

This was the view to the other side of the rainbow meadow...nooooooo... that isn't a lake!  Just more goopy,  mud ponds! 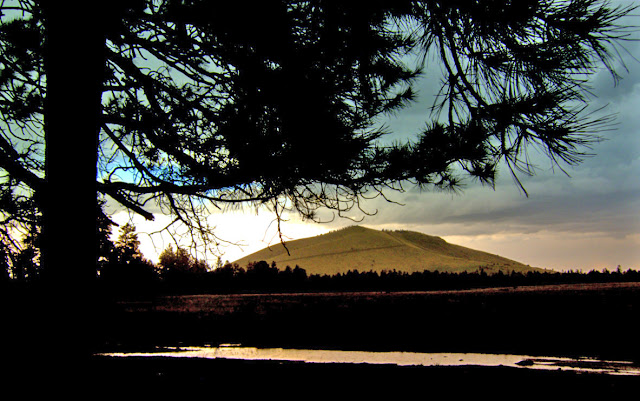 So, Nikko and I just chilled out there for the night.  Uneventful until the next morning when I had a dead battery....for no reason I could figure out.  This was when I was glad I had parked right on the road!  I flagged down the first truck that came by and he was more than happy to give me a jump. Come to find out, my headlights were on....but I don't know why!  I never drive with them on during the day...and 25 years ago these rigs didn't have the convenient buzzer to tell you to turn off your lights.  One of those unsolved mysteries, I guess.  Anyway....it worked out fine and we took off down AZ260 a little further....and I mean, maybe only a couple of miles.

Pulled off onto another forest road (the is Apache National Forest territory) and passed several entry lanes into campsite areas, but they were SO muddy I didn't venture down those....plus there were already several RVs and such along in there.  You know....I don't like neighbors!  LOL!  I guess I went about two miles on down the road and saw a little lane that was passable.  Just a little way in, was a decent site.  And it was a single site....no way anyone else could camp there. 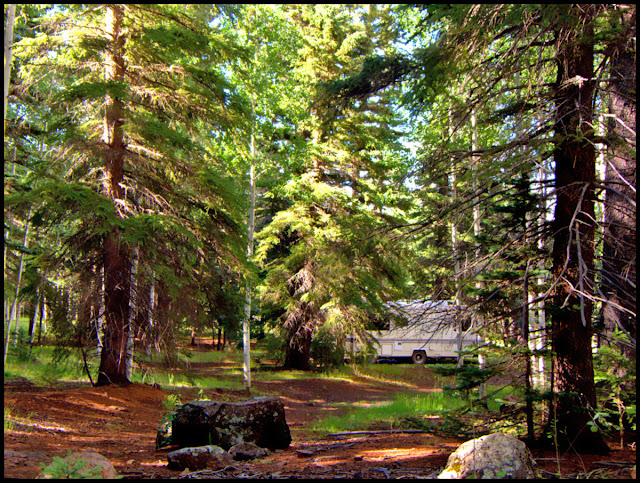 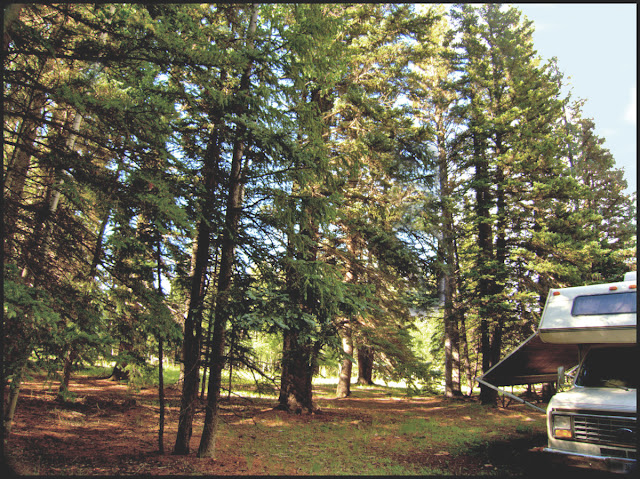 This seems okay!  It was a little damp and mostly dirt, but not bad.  Lots of trees and it was plenty cool!  About 70*....perfect!

There wasn't much "scenery" around when Nikko and I took our walk that first day....just forest-y stuff....but pretty. 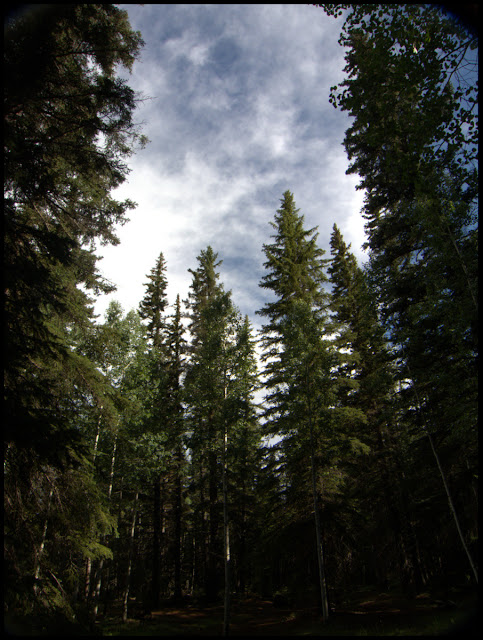 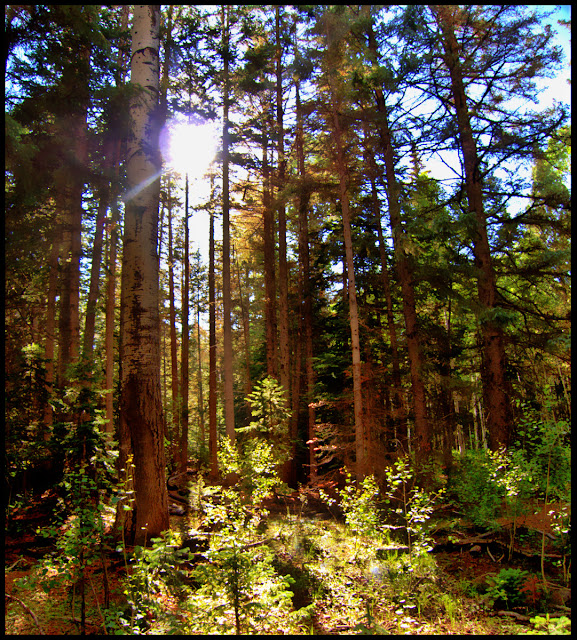 Lots of aspens...one of my favorite trees! 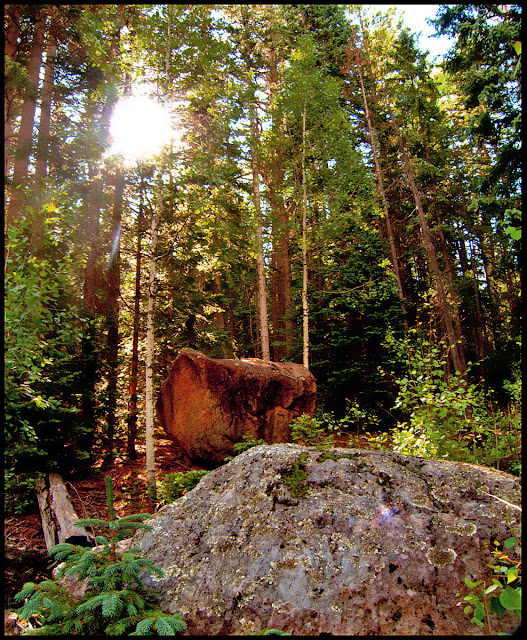 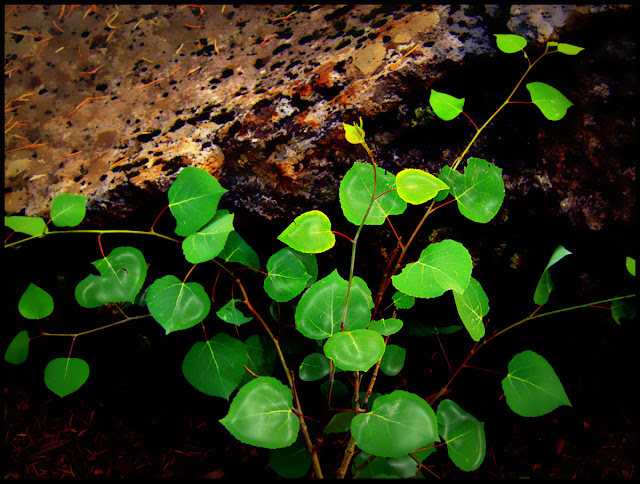 And lots of rocks with interesting displays of lichen and moss.... 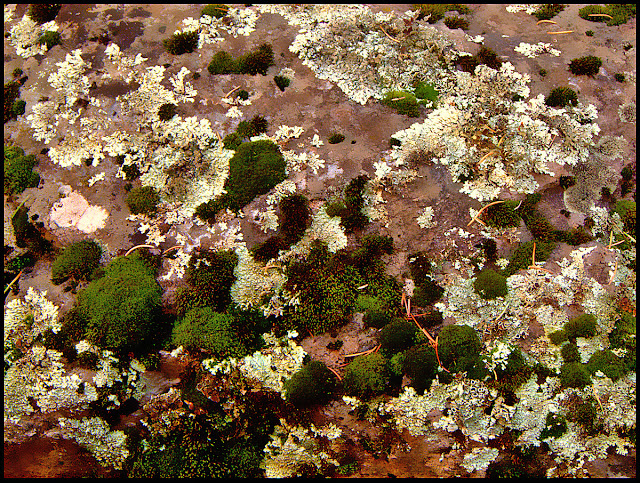 Okay....that was Day 1.  Day 2, 3, 4, 5 were terrible!  Rain, rain, rain and more rain!  And I mean HARD rain....even some hail one day.  We couldn't go for any walks and all that dirt turned to.....yep! Mud!  What a mess!  And with mud came four muddy paws in and out! It was dark and gloomy....I had to have a light on during the day.  And, of course, no solar power to speak of.  The generator got a workout!  And with all that rain came a monumental leak around the dining area window.  Soaked every towel I had!  See???  It's not always pretty pictures!  LOL!  It's just like "real life"!  Stuff happens!  I cut up some large black plastic garbage bags and taped them over the window. How attractive!  I actually ended up covering even more of the window than this shows.  Now it was even darker inside! UGH! 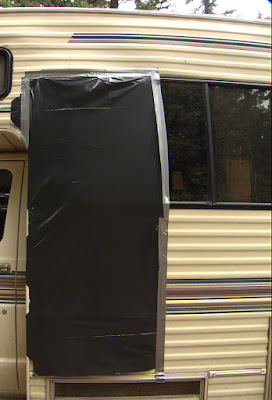 Finally, yesterday morning it cleared off for a little while and I was able to tromp around in the mud and put silicone caulk around where I thought the leak originated. (I keep several tubes with me at all times!) Luckily it didn't rain until evening so it had time to dry.  The good news is, no more leaks!

On top of all the rain, the internet connection went away....so I couldn't even pass the time online.  It was a Verizon outage and they said they would "work on it"...could take up to 72 hours to fix the problem.  Hmmmmmm.....this isn't so great!

Ok -- I'll bake something!  That will take up a little time and warm up the RV!
How about a peach/nectarine cobbler?  Yum!  It was good! 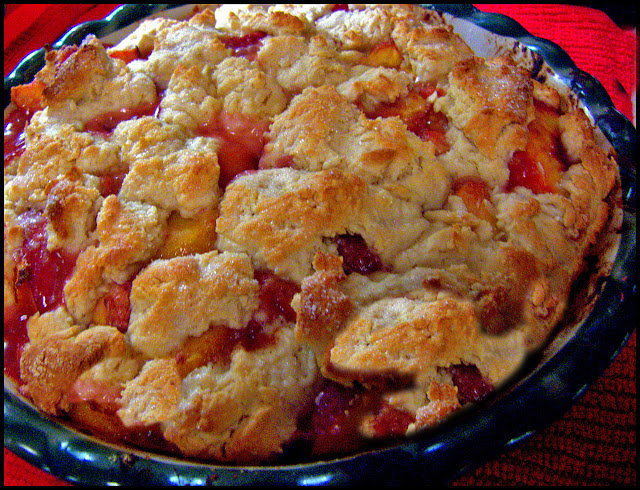 By last night I had pretty much had it with this site, so we left this morning at 6:00am, heading west.   But, just before we left, I noticed the "Ck Propane" light was on on the refrigerator.....but I have plenty of propane.  Something else to deal with.  I figured out that it just isn't igniting.  I got out the manual, but those instructions didn't resolve the problem.  So, I knew I had to get to Show Low, AZ to find someone to look at it.

I turned the opposite way out of the site....I just wanted to see what was on down the road....very quickly, the forest gave way to open meadows...  really pretty! 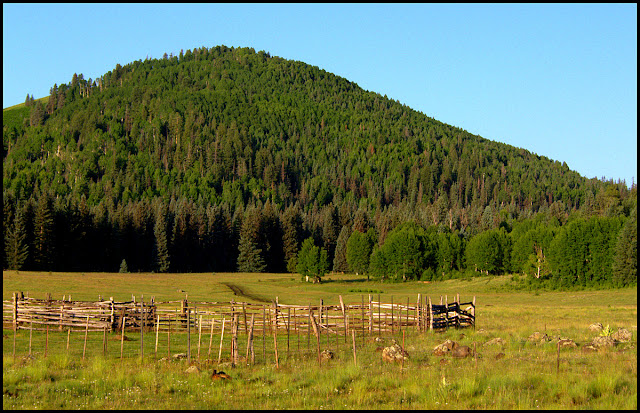 Just as I was turning around to head back out to the highway,  Nikko alerted me to some horses that appeared out of nowhere... 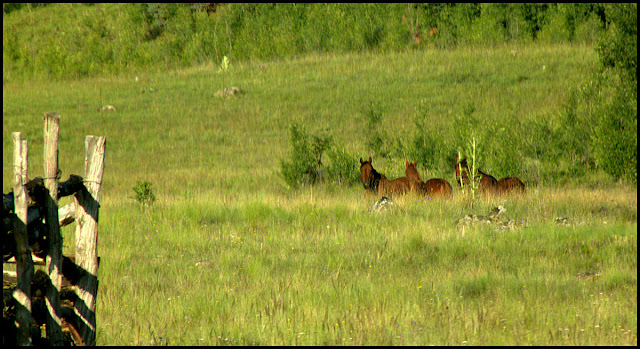 That leaves me sitting here, right now, in the Show Low Walmart parking lot!  The mobile RV tech can't get here until about 4pm.  That's okay.  I can do shopping and catch up on emails and research I couldn't do when the internet connection went down.  There's a little wooded area right by where we're parked, so Nikko has a place to walk. It's a bit warmer here...low 80's.  I'm happy with that....I was freezing in the rainy spot!  We will probably end up just staying here overnight. Then, I think I have a plan for tomorrow.  Something a little different..... no forests or lakes or mountains, but handy...and free!  Watch for the next post!

It's a wrap, from WalMart!  And this is probably the most populated WalMart I've ever seen.  It's a huge parking lot and every space is filled!  But, forget WalMart.....shop Amazon!  :-)

As always, thank you for shopping Amazon via my blog!

Shop Amazon....where you can find anything and everything!

Have a great weekend!

Hey - after having the generator on for awhile, the CK Propane light has gone off!  YAY!
And....there is rain coming in now....but the parking lot will be free of mud!  YAY! 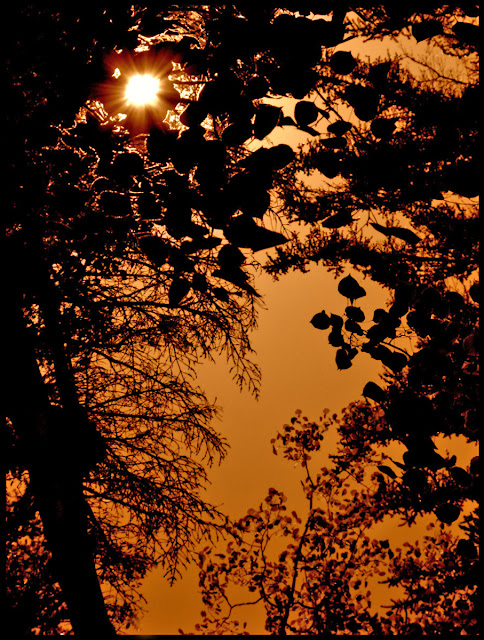