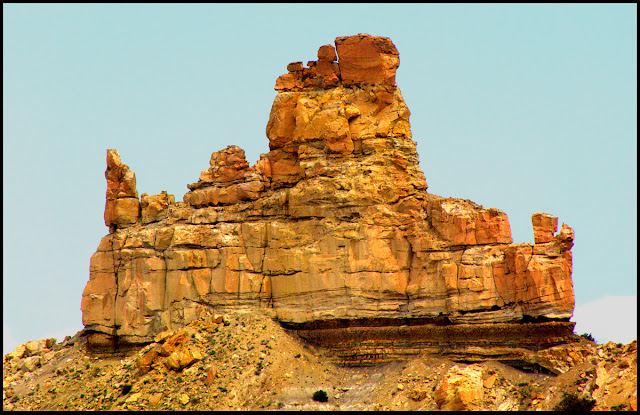 As promised, I have more photos of Angel Peak here in New Mexico.  This is a pretty unique place to have lived for two weeks!  It’s getting very warm here, tho’.  90’s.  I don’t mind it so much, but trying to keep Nikko somewhat cool is a little difficult.  Luckily, the humidity is only 9%.  That helps tremendously!  I have had the awning out all this week (first time in months) to keep the sun off the more southern side of the RV.  Luckily I am parked well for that to make a difference.  But, it’s summer!  Too bad I can’t explain that to Nikko.

40,000,000 years old is the only “history” I can tell you about Angel Peak….it’s simply a neat geologic formation.  I would imagine that to certain Native American groups, it would be something quite significant.  I can’t imagine that it wouldn’t, but I couldn’t find anything to support that theory…so perhaps it’s just an interesting, ancient rock formation.  But, I’ll take that!  It’s been a wonderful view every day!

Here we go….first, just some colorful photos from the same vantage point(s) as those in the previous post…all just steps from my site. 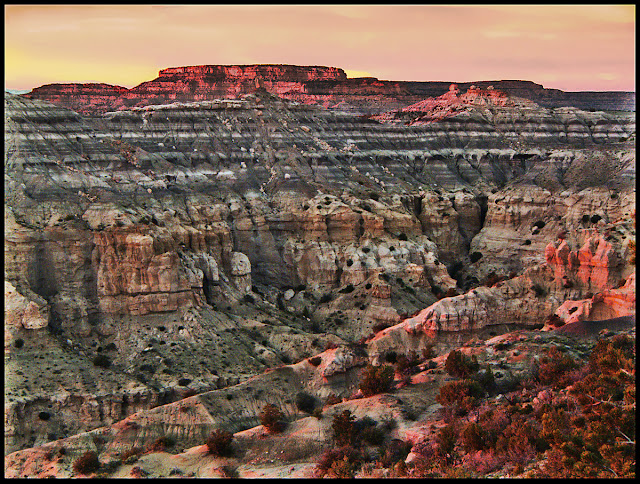 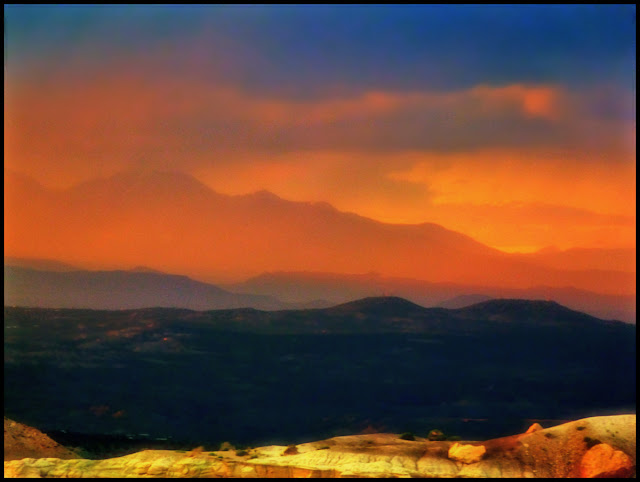 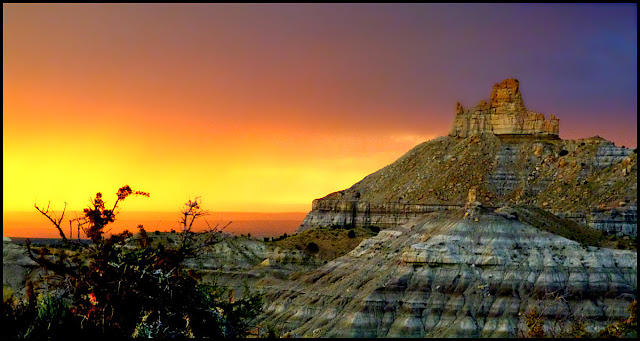 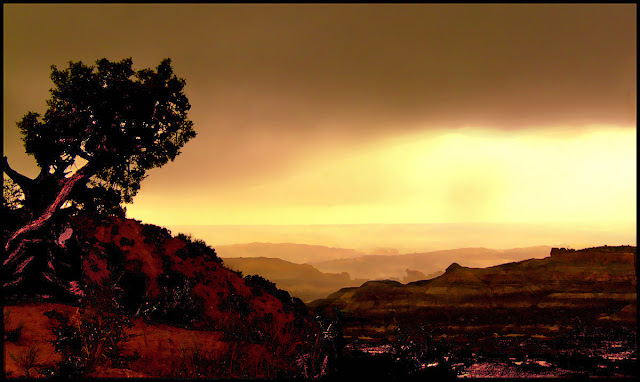 Mix of a pretty sunset and rain in the distance.... 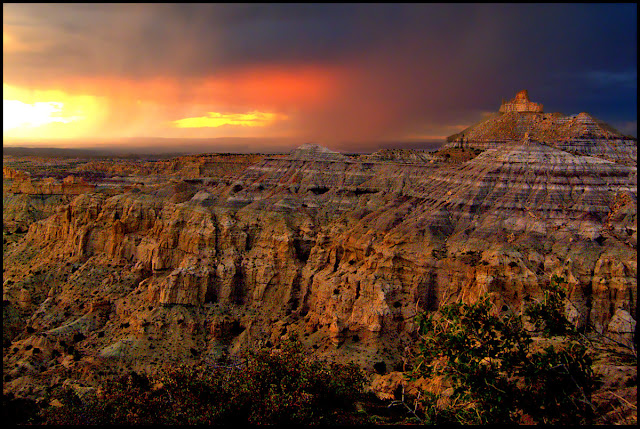 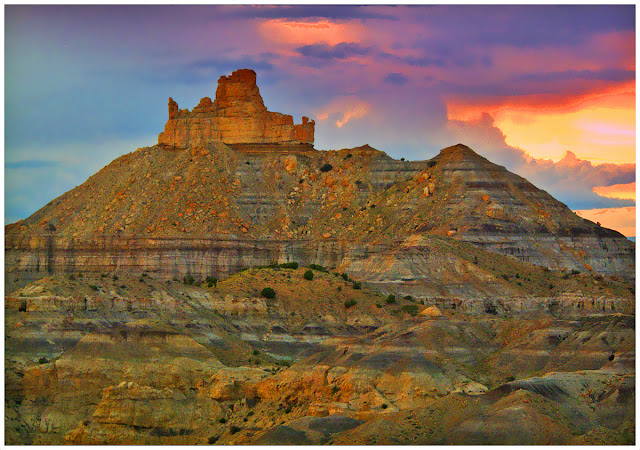 On Tuesday morning Nikko and I took a hike going the other direction (east) around the rim toward the mesa.  No manicured walkways back there!  Hardly even what I would call a “path”…but we foraged through the tall grasses and brush.  It’s okay to walk there….there’s a turn style to enter the area, but not many people probably even realize you can walk around that way. 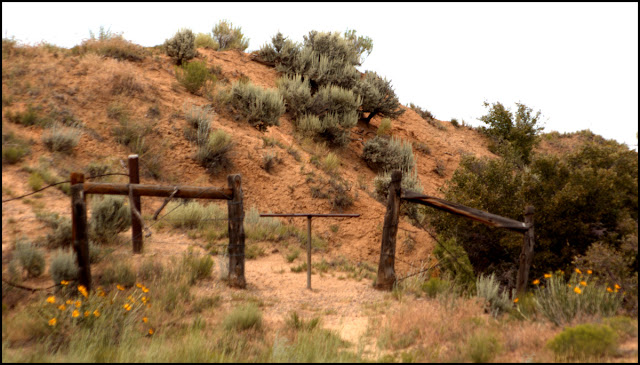 I had no idea how far we would be able to go….ultimately, we went so far that we eventually had to turn around and come back…it was getting hot and we didn’t have any water with us.  We could have gone much further under different circumstances.  However, it was plenty far enough to see Angel Peak from another direction plus a whole other canyon between Angel Peak and the mesa in the far distance.  The ground here is 100% sand…it’s like you’re walking on the beach, only no water in sight!

As you can see here, the rim curves around to the right toward the mesa.  That's the route.... 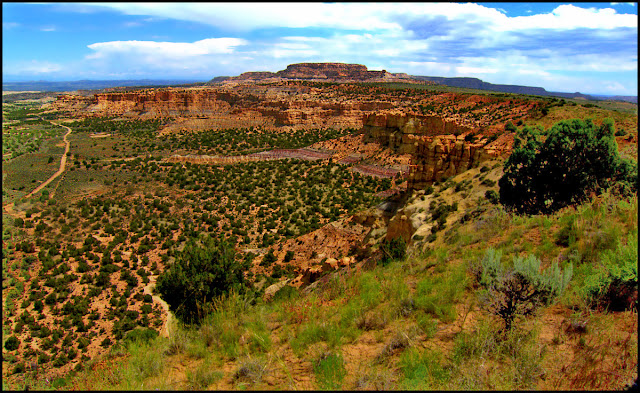 Here are some different views of Angel Peak and heading toward the mesa…really pretty! 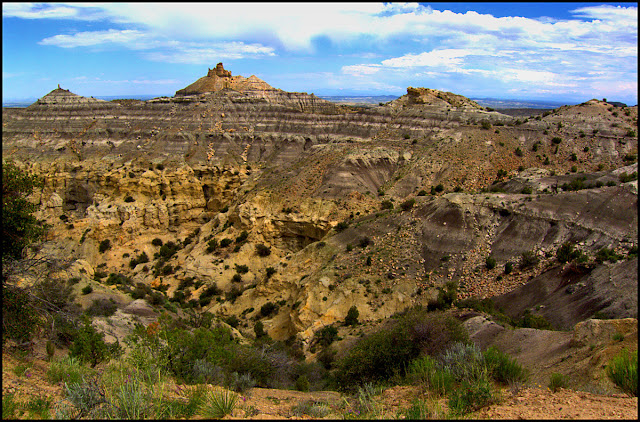 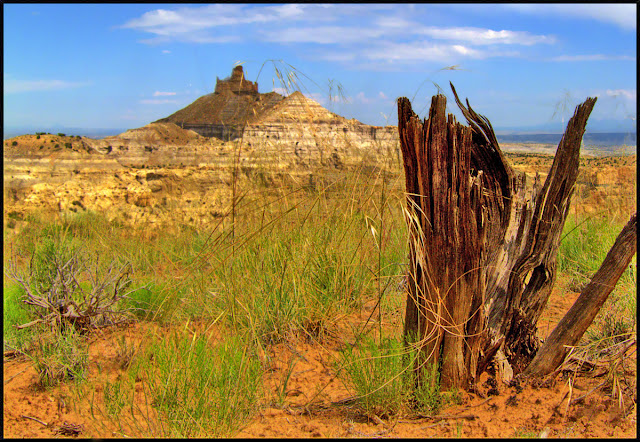 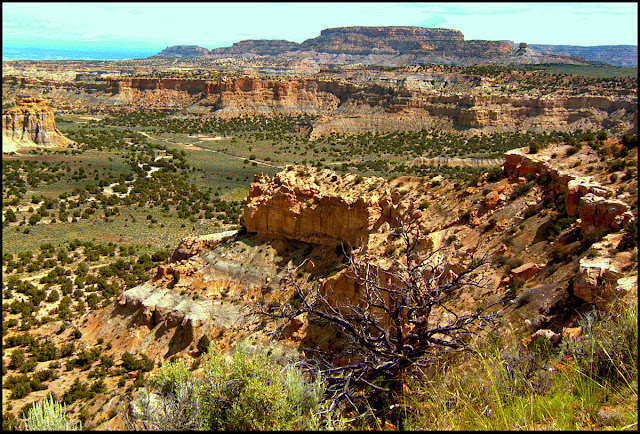 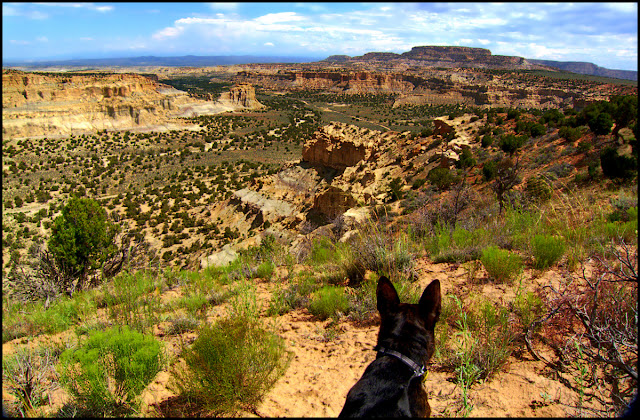 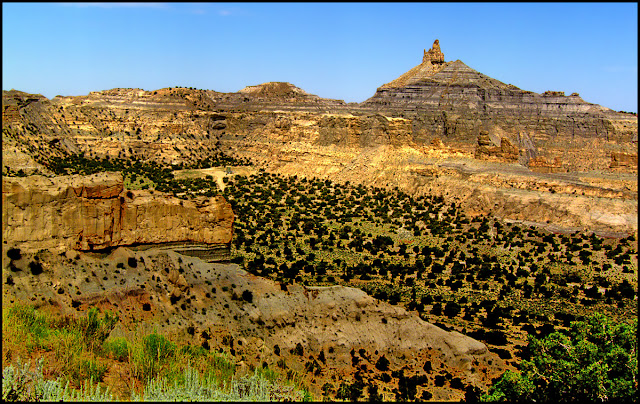 The other two interesting peaks here....amazing how they have formed.... 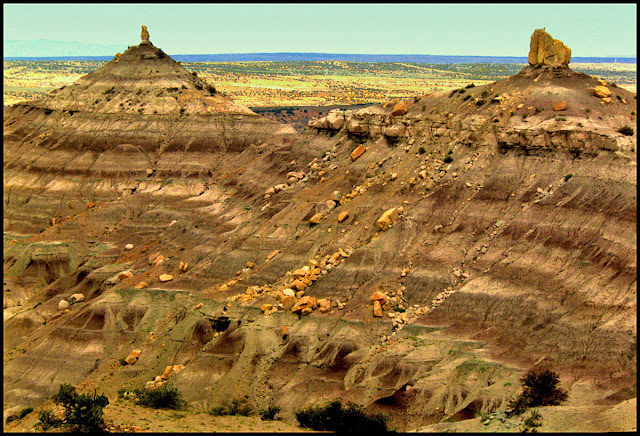 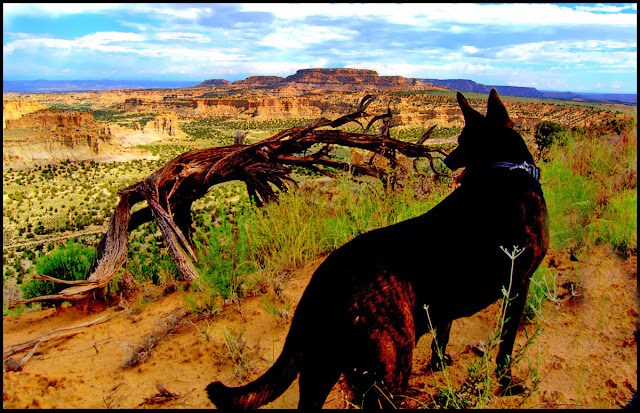 Nikko was exhausted when we got back, but it was good exercise.  He likes his pillow time! 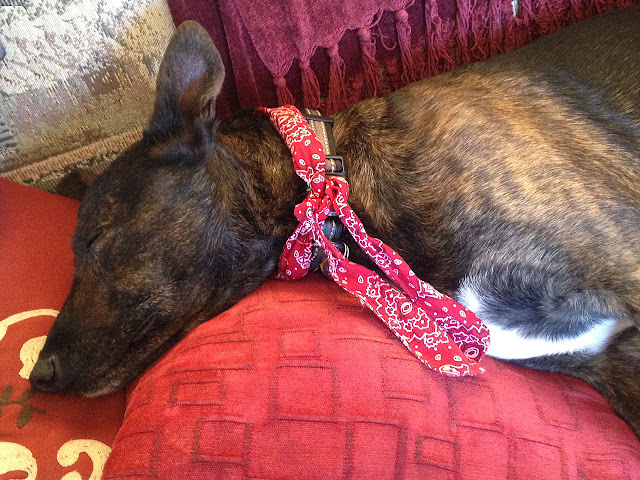 I met a few fellow campers here.  One younger couple works for the oil pipeline, so they are on the move all the time.  Another fellow, Randy, from Florida, travels around like I do.  He arrived at the El Malpais campground right after I had left.  He prefers the forests over the more desert-y areas, but it sounded like he was enjoying his journey so far.  He was headed into Utah  and was kind enough to send me some info on a few roads that I probably shouldn't try to navigate when I head that direction. He also tweaked my solar panel and I'm getting even more power from it now. Thanks, Randy!  We had a windy day and he wrestled a bit with his umbrella, but finally got it under control for a restful repose overlooking the canyon. 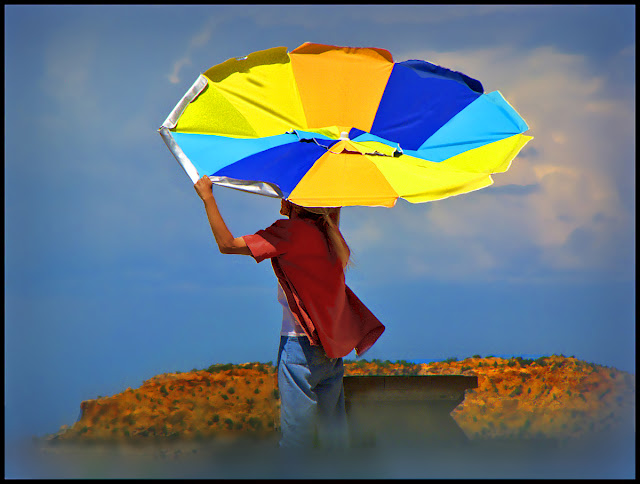 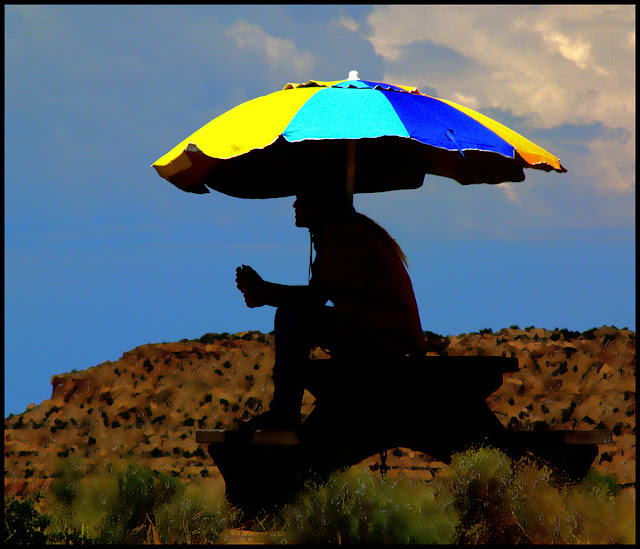 Another couple, Eric (a great photographer) and Sandy, who took Randy's spot when he left have a very cool, 80's VW Westfalia camper.  They are full time RVers because they lost virtually everything a few years ago due to an unfortunate malpractice situation which started 10 yrs ago and a law suit that was botched by a bad attorney.  She will suffer the ramifications for the rest of her life (she's only in her early 50's), But, they feel now that they have more than they ever did -- beautiful views and sunsets, new adventures with every spot, meeting new and interesting people along the way and they have each other!  Really nice people with a great outlook on life! 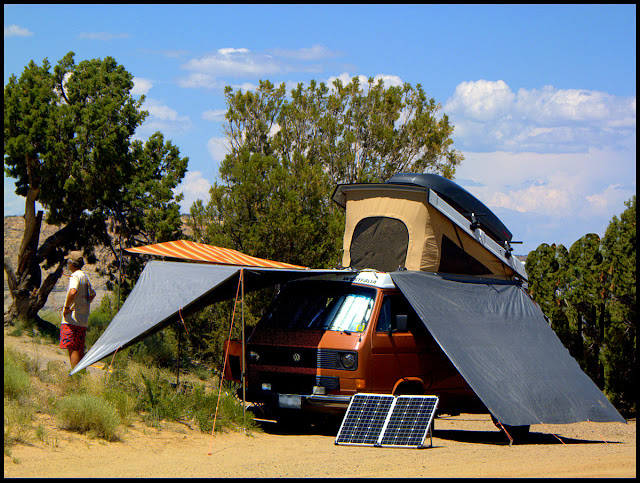 Another fellow who was passing through just to take some photos, who also works for the pipeline, gave me his card and said I could stay on his Billings, Montana ranch land anytime!  He's never there. There are a lot of nice people out there!

We will be leaving here after the weekend…heading a little further north into Colorado.  I have if-y information on our next stop, so it will be another “cross my fingers” jaunt.  But, it’s an adventure!  If it were all perfectly laid out and wrapped up with a fancy ribbon, it wouldn’t have the same appeal!  And, of course, I don’t know about internet connectivity there.  We have to stop first in Farmington for water, propane, Petco and Walmart AND a new iPhone screen!  We’ll get going early…just in case the site in mind isn’t going to work out, we’ll have time to find somewhere else.

Oh – I also promised a “surprise”!  This was a surprise on an if-y weather day, for sure!  I was outside talking on the phone with a friend and was just about to say, “The conditions right now are perfect for a rainbow…” (a few rain drops, but sun in the opposite direction) but I didn’t want to interrupt the conversation.  In another second, I happened to turn around and saw a total arc rainbow!  I said, “Hold on….just hold on…”  I dropped the phone on the ground (still not sure why except I didn't have any pockets) and ran into the RV and grabbed the first camera I saw (I keep three handy). I took several photos, but this was my favorite! 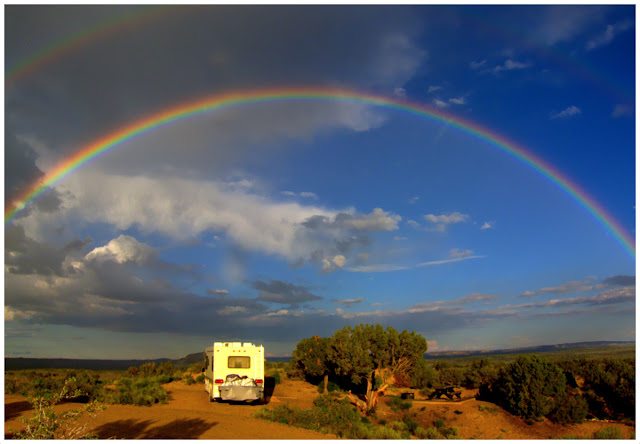 Needless to say, I was thrilled to get these photos….especially with my RV in the perfect position.  This is what RVing is all about for me….never knowing what to expect!  After this fun and unexpected “photo shoot” I almost couldn’t find where I dropped my phone to continue the conversation!  LOL!  Anything for a great photo!

So, this has been my Angel Peak experience.  I hope you enjoyed this site as much as I did!  Put this spot on your radar if you are ever in NE New Mexico or southern Colorado.  You don’t have to camp…just drive out here for these great views!  I’m not going to want to leave!  IF I have an internet connection at the next stop, stay tuned for a "special edition" post!

So long from Angel Peak!  Everyone have a great weekend!
Happy Father's Day to all the dads out there!

Thank you for shopping via my Amazon link! 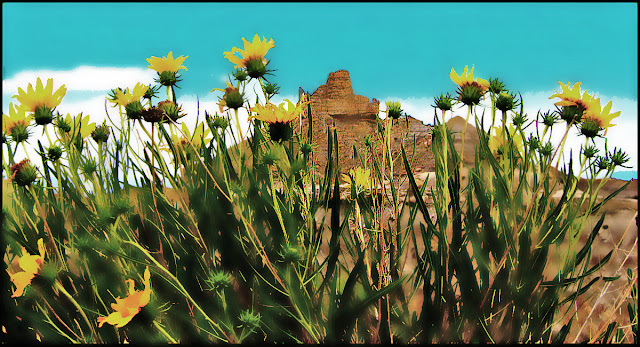