Nikko and I started the “new year” – RVing year, that is, on Monday.  We left Angel Peak around 7am and after numerous errands in Farmington, NM, we headed north on Rt. 170 /140– more or less a “backroad” almost straight north to our current site outside of Mancos, Colorado….about an hour or so drive from Farmington.

The scenery was pretty nondescript, but it was “greening up”, which was a nice change.  I was hoping for no steep inclines/declines along the way and was happy that was the case.  Any changes in elevation were relatively gradual.  We hit the border and entered Colorado, and the views changed almost the moment we crossed that line.  Note the simple Welcome sign….nothing fancy like out on the interstate…I almost missed it! 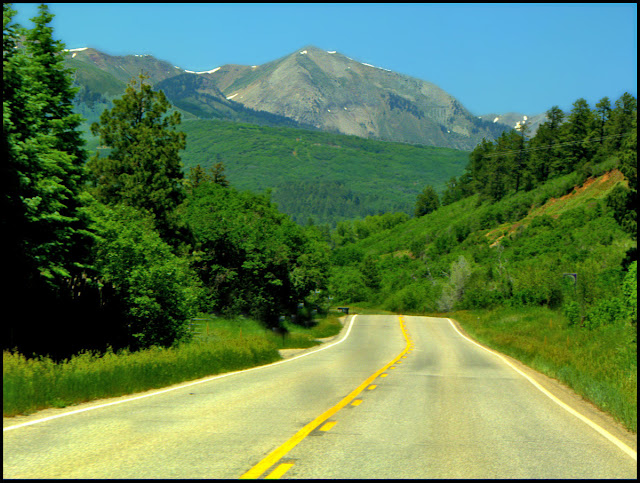 Pretty nice!  We’re not in New Mexico anymore!  I wasn’t too sure about the site I had researched.  Everything I had read was a little if-y.…..like could I even get the RV there?  But, following my usual practice, I forged ahead, hoping for the best.

This dispersed camping/free site was supposedly just inside the San Juan National Forest on Rt. 160 which runs east/west just above the border, about 8 miles east of Mancos, CO - about 25 miles west of Durango.  I kept looking for Road 316….wasn’t seeing it.  The GPS said turn on Cherry Hill Road.  I went past it the first time because it wasn’t “316” and was just a little dirt road going up a hill.  Was that it??  I went on about 5 miles and saw an actual campground within the Nat’l Forest, so I turned there just to see what it was all about.  The dirt road there wasn’t any better than Cherry Hill Rd.  I drove up the craggy, narrow lane, past a couple of campsites going up the hillside and saw the sign that it was a “fee” campground.  Hmmmmmm….not my usual, but good to know it was there, just in case I needed an overnight spot.

I turned around and exited back onto 160.  The GPS was taking me back to Cherry Hill Rd.  Ok, Ok !  I’ll go up there and see what’s there!  The road was a bit steep, but not too bad because it was quite short up to the “landing”.

Well, it was the right place.  This is called “Madden Peak”, although I don’t know where the peak is!  LOL!  I vaguely recognized a few things I had read in the wishy-washy write up.  I knew there weren’t many campsites here.  There was a van camper in the first one, which was just before where the landing actually began.  Then the landing….a HUGE flat open space…almost like a “parking lot” of sorts.  I noticed a little fire ring next to the tree line, so I pulled over there.  Hmmmmmm….not really what I had in mind.  Totally open and in full sun.  Ok for overnight, but not 14 days.  I parked so Nikko could go out while I surveyed the area.  There was another sight slightly above grade opposite where we were sitting, but it was no better…even more open.

I looked over a the little meadow and a berm (right side of the lot) and saw a truck over there with a couple of guys and their ATVs.  That little area looked interesting and it looked like they were gathering stuff up to leave.  We waited about 10 minutes and sure enough they took off.  We walked over there and there was the perfect site!!  It didn’t look like they were coming back…they had just been there for their ATV ride.  Secluded and nestled in trees with plenty of shade and a big fire ring….an embankment to one side and the berm on the other….trees around two sides and up on the embankment.  Off we went!  It took a little maneuvering to get in, but not bad.  I parked and got pretty much level.  This will be just fine!  Great, in fact! Can't even see the parking lot from here. Thanks, ATV-guys for leaving at the exact right moment! 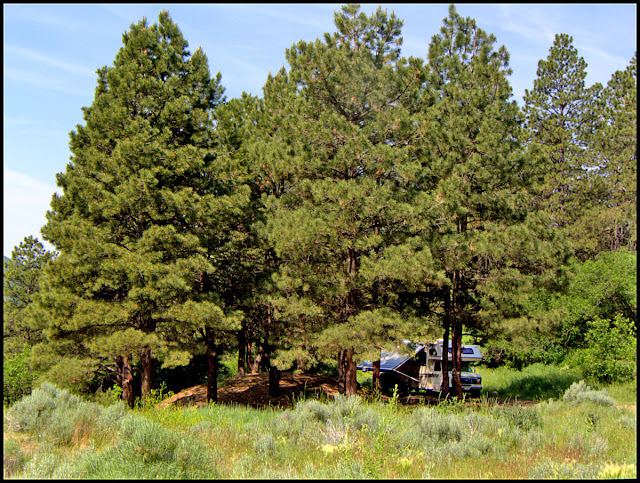 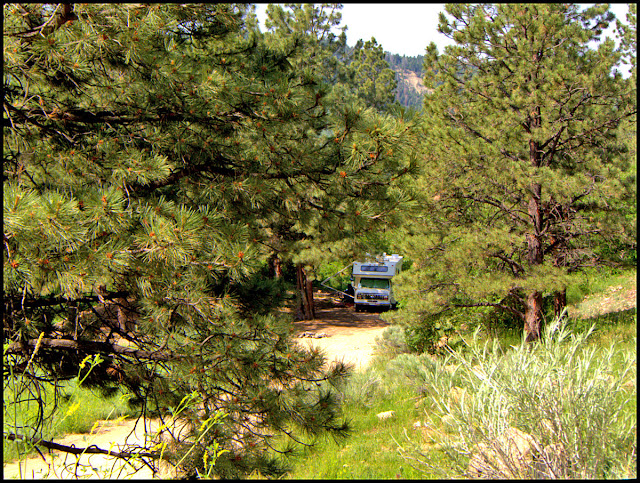 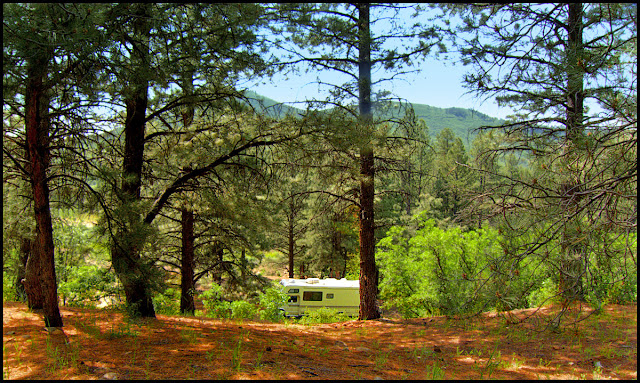 There is a little truck noise from 160 but after the first day it either diminished greatly or I just got used to it, or a combination.  Anyway, it’s hardly noticeable…virtually non-existent when indoors.  The roadway can’t be seen at all from here…lots of trees and it’s well below our grade.

As usual, moving day was tiring.  I got partially set up.  Enough. Did the rest on Tuesday morning after a good night’s sleep in the forest J

The weather has been great all week so far….sunny, low 80s, pleasant humidity factor, and the nights are in the 50s.  Much cooler than if we’d stayed south.  Plus, I have the trees and awning for shade. Fortunately, the sun hits in the right spots for the solar panel.  All was in place for hiking around the area on Wednesday.  There’s a pretty steep, rutted road that takes off from the “parking lot” area….seemed like that was a good path to start exploring.

Surrounded by grasses, oaks and tall pines, we started climbing.  After a few minutes, we came upon a spot that would be a super campsite, IF it had been possible to drive up there, that is.  A 4WD could manage it.  I looks too slanted for camping, but there's actually a level spot up there.  The site overlooks a valley of sorts and across to a higher “mountain” area.  Pretty views! 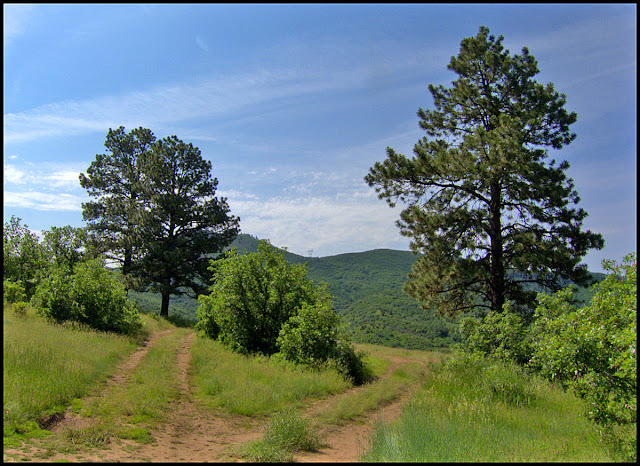 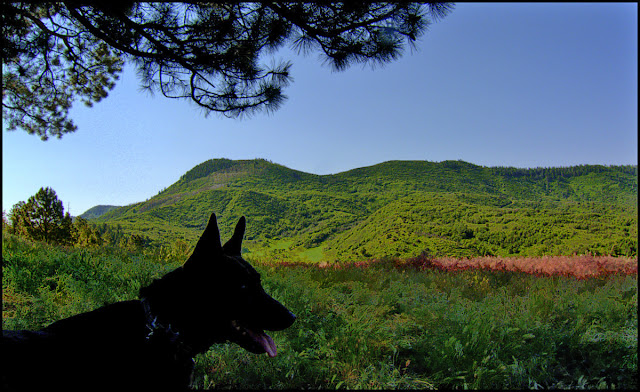 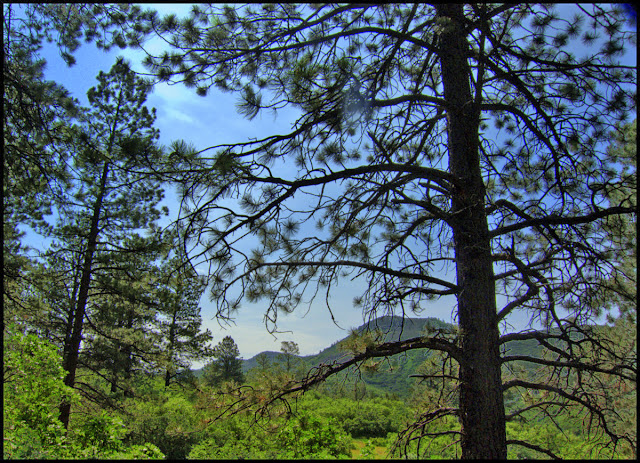 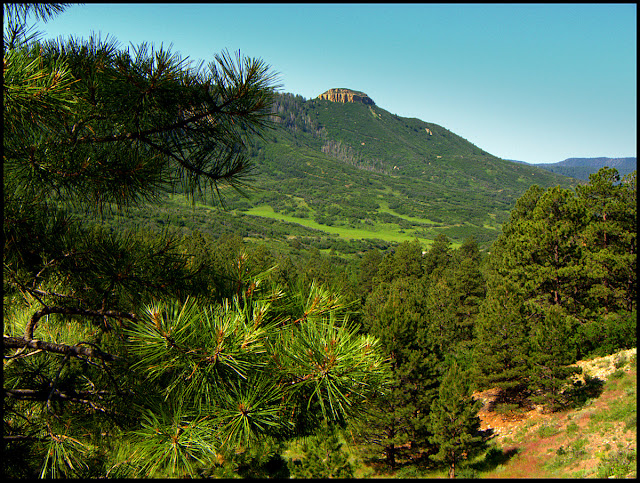 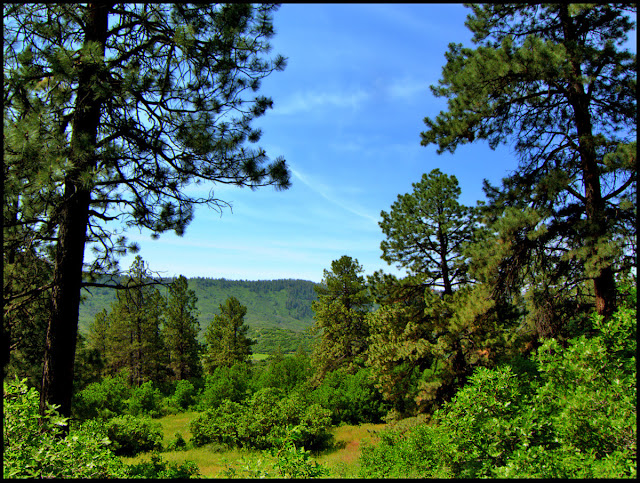 From there, this dirt lane gets steeper and more rutted.  I noticed a trail through the woods going up the hillside.  That would be more fun than walking on the road.  So, we went under a barbed wire fence and started the climb.  Nothing unusual about it, particularly…it’s just a forest, but it had been awhile since we had been among trees and such, so it was a pleasant difference. We got to “the top”…kinda.  The trail just stopped, so we had to stop.  Too dense to go any further….I think we would have just seen views of some other equally high elevation hillsides.  By now, the road had veered off in another direction.

We found a place to rest among the trees for a few minutes, just taking in nature.  There are lots of wild, mountain lupines, wild roses, little daisy patches and other wild flowers around. 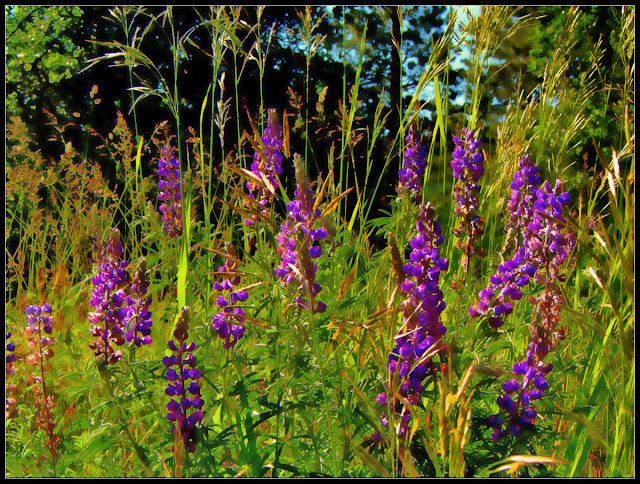 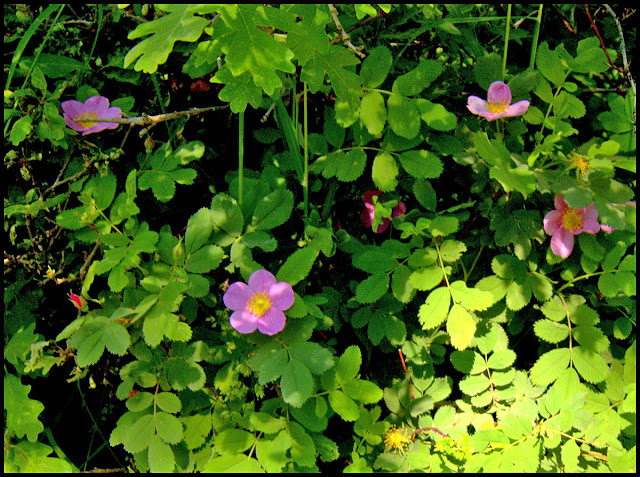 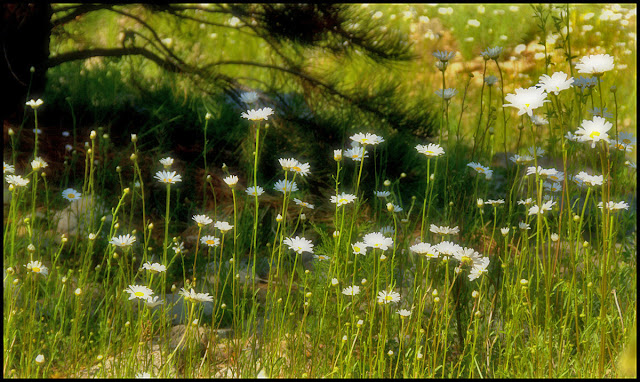 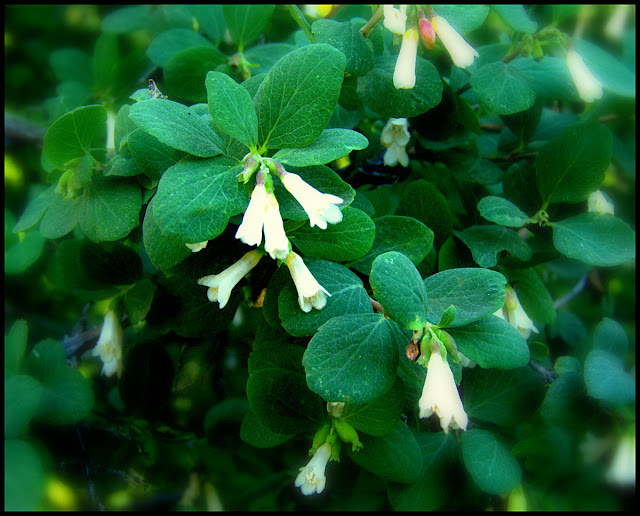 Then we made our way back down the hillside.  It was pretty steep.  Being in front, on-leash, Nikko paced himself and waited, with each step, for me to get sure footing.  He was so good not to pull me along…he could have scampered back down on his own very quickly...and drug me tumbling behind him!  It started getting steep right after this flat area.... 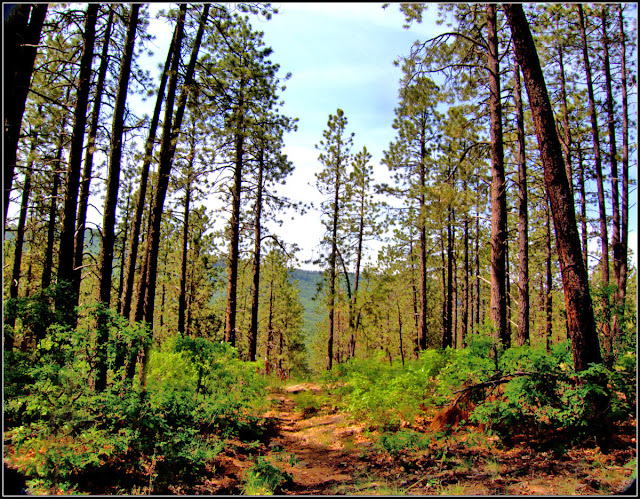 Back to the starting point at the trailhead, we could have explored the road as it went further up the hillside to see where it went, but it was time to go back.  There’s plenty of time to go up there.  We’ll be here until about July 6th.  No one is here and only a few “visitors” have come through…mostly guys with ATVs or dirt bikes.  They leave from the “parking lot” and are quickly gone up that steep road, so we only hear them for a minute.  One day some horseback riders came by.  They went up there, too….it must lead somewhere! 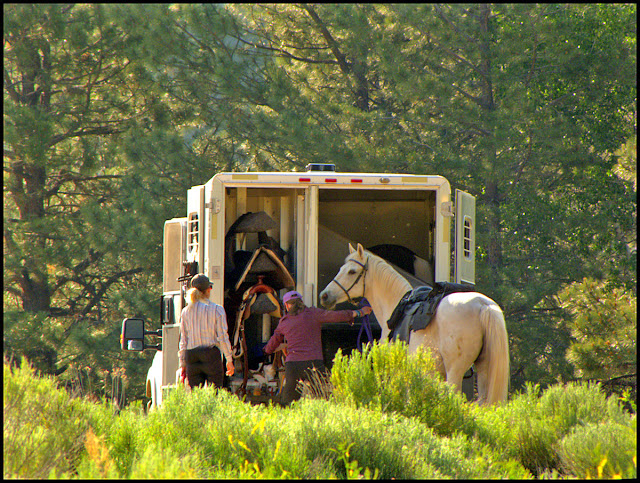 The other day I decided to devise an outdoor shower with an actual curtain!  I really don't need the curtain here, but a few places I've been, it would have been handy...instead of waiting til dark to take a shower...and by then the water has cooled down.  This works pretty well for $10! 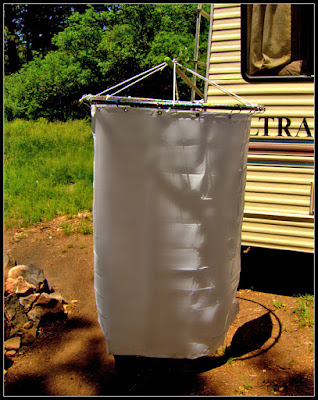 Made a camp stove-stove top fresh strawberry/peach cobbler yesterday in the iron skillet.  I didn't want to heat up the inside with the oven or stovetop....this worked out okay...and it was good!  Went along fine with the strawberry/grapefruit/basil daquiri, too!  Fresh basil + fruit is soooo good!  I have a basil plant I tote around with me, along with an indoor herb garden with thyme, cilantro and rosemary. 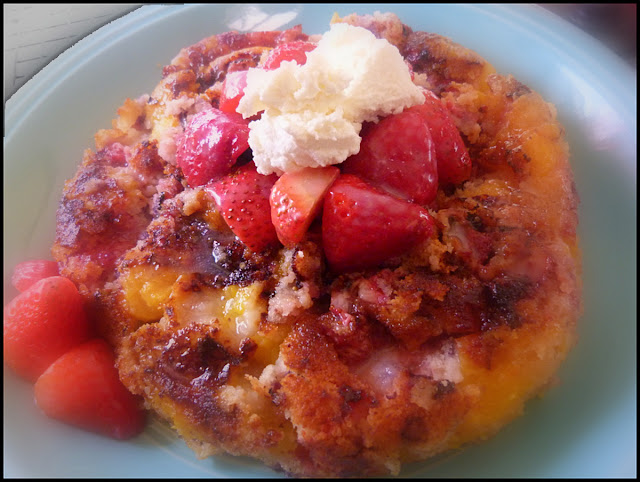 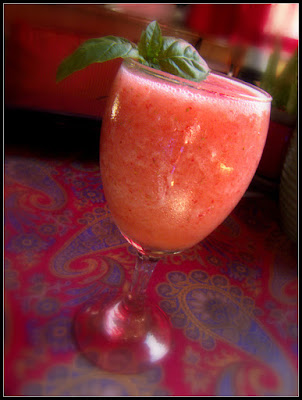 So, welcome to the San Juan National Forest!  This is a nice, little, FREE spot.  The forest consists of 1.8 million acres in the southwestern corner of Colorado.  I would like to spend more time here….they have lots of campgrounds, but I believe they are all “fee” campsites…could never find how much, tho’…usually that’s easily found online, but not here for some reason.  I probably couldn’t get to a lot of them anyway!

The only unexplored area is going on up that road, so if there’s more to report from that hike, I will.  Otherwise, I’ll catch up with you from the next stop the week of the 6th….I think I know where that might be….but it will only be for a few days, then on into Utah.

So long, for now, from Colorado!


Thank you for shopping Amazon via my blog!
Shop now for all your summer camping and vacation supplies! 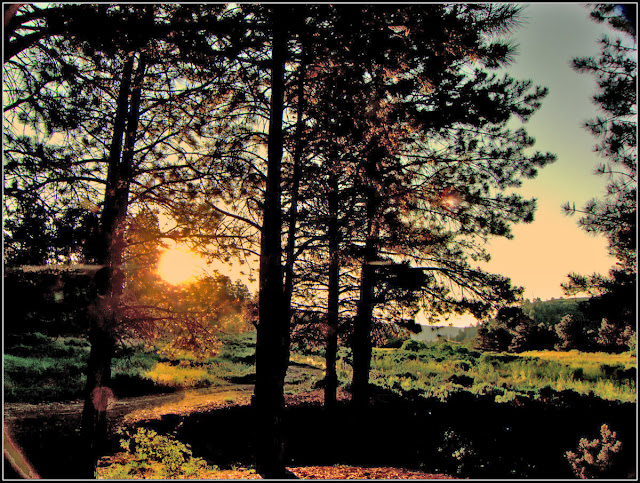