It's been awhile, but I think I mentioned that there will be some downtime between posts until I get to South Dakota.  But, I'm well on my way!  Here's the path I was on this past week:

I drive quite a distance along the Trail of Tears.  Many of you may know the history surrounding the Indian Removal Act of 1830.  Here's a link if you would like to know more about this time of Native American Indian history.  http://www.history.com/topics/native-american-history/trail-of-tears

This was a pretty little campsite, which I had to myself, but getting there was something else!  It must have been 12, maybe 15 miles down a very rutted, one lane, red clay dirt/gravel road.  But, worth it once I landed.  The funny part is, when I left the next morning, I turned the opposite direction from the way I came in and I was only 1.75 miles from an actual paved road!  LOL! 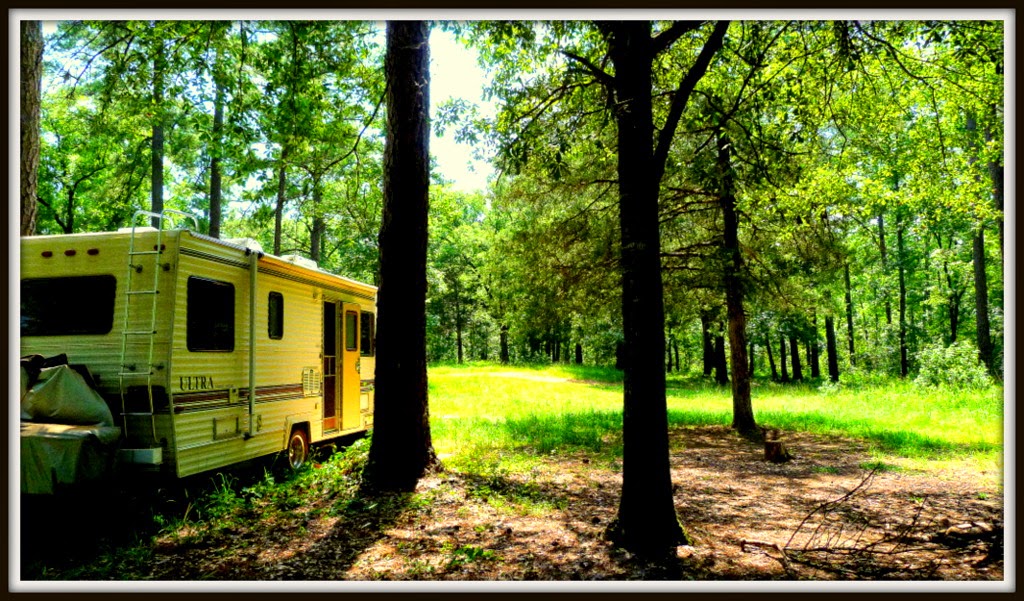 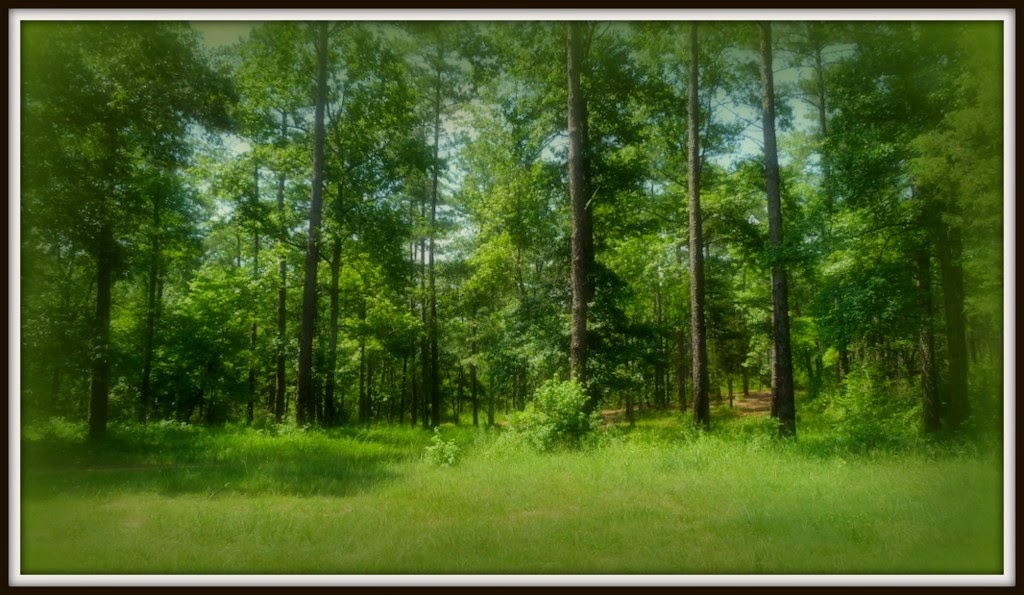 I had planned on staying at the Dekalb County Public Fish Lake, but as luck would have it,  it was closed for fish restocking.  I guess they have to do that sometime, but it had to be the day I was going to stay there!  Oh well, Walmart to the rescue!  It was fine.

This is a GEM of a free campsite!  Like a mini state park.  All in commemoration of Meriwether Lewis.  It has been authenticated that this is the site in which he met his death in 1809.  It is very wooded, the sites are paved for parking, each with a fire ring, picnic table and trash receptacle. The sites are very large!  AND there's potable water at the entrance of which I took full advantage. Washed the red clay dust off the RV, had a nice long, hot solar shower and washed clothes in my portable washing machine.  The weather was perfect, so I strung a line and they dried in no time. There are hiking trails and it's very easy to ride a bike around the park.  See the RV way back there?  Oh - and I had this entire campground all to myself, too! 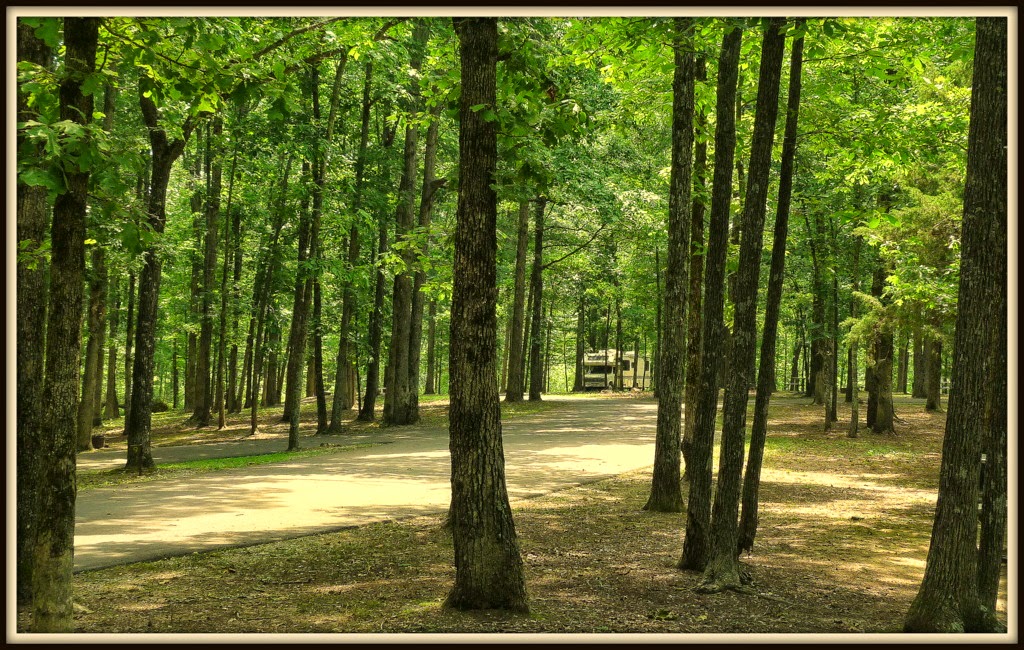 I did meet Ed and his daughter, Nikki from Kentucky. They were driving through and wanted to know how much it cost to stay at this site...a big, fat ZERO, I told them!  And you can stay for 14 days.  (Wish I'd had the time!) We had a nice conversation.  Nikki is a true CHAMPION archer! 4th in the U.S. in her division.  She's in college majoring in biology...also looking into forestry management and criminal justice.  Very impressive young lady!  HI, you two, if you are reading this!

Back to Meriwether Lewis....here is the placard, monument and house where he died... remember - click to enlarge... 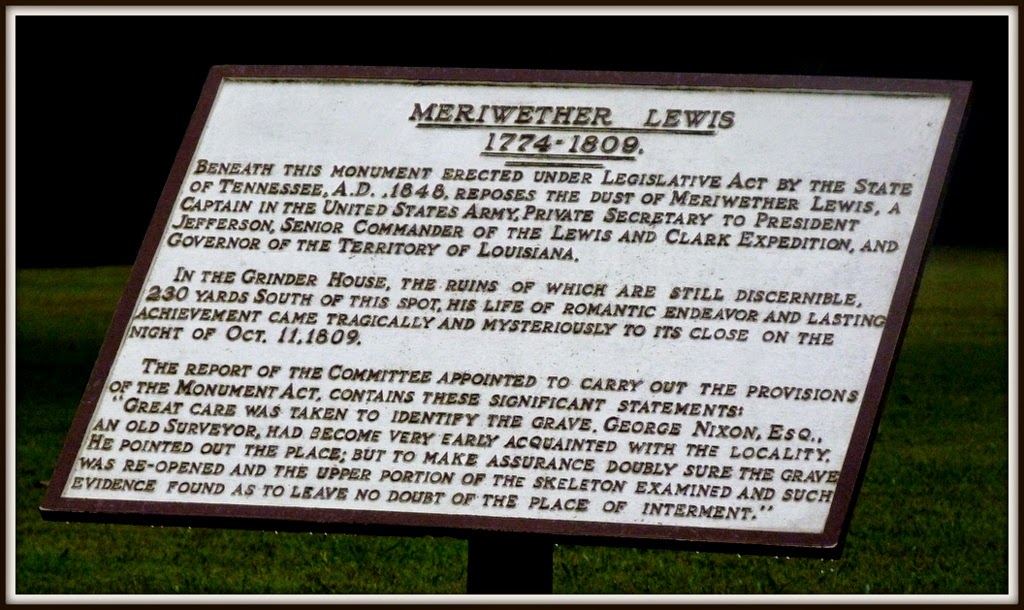 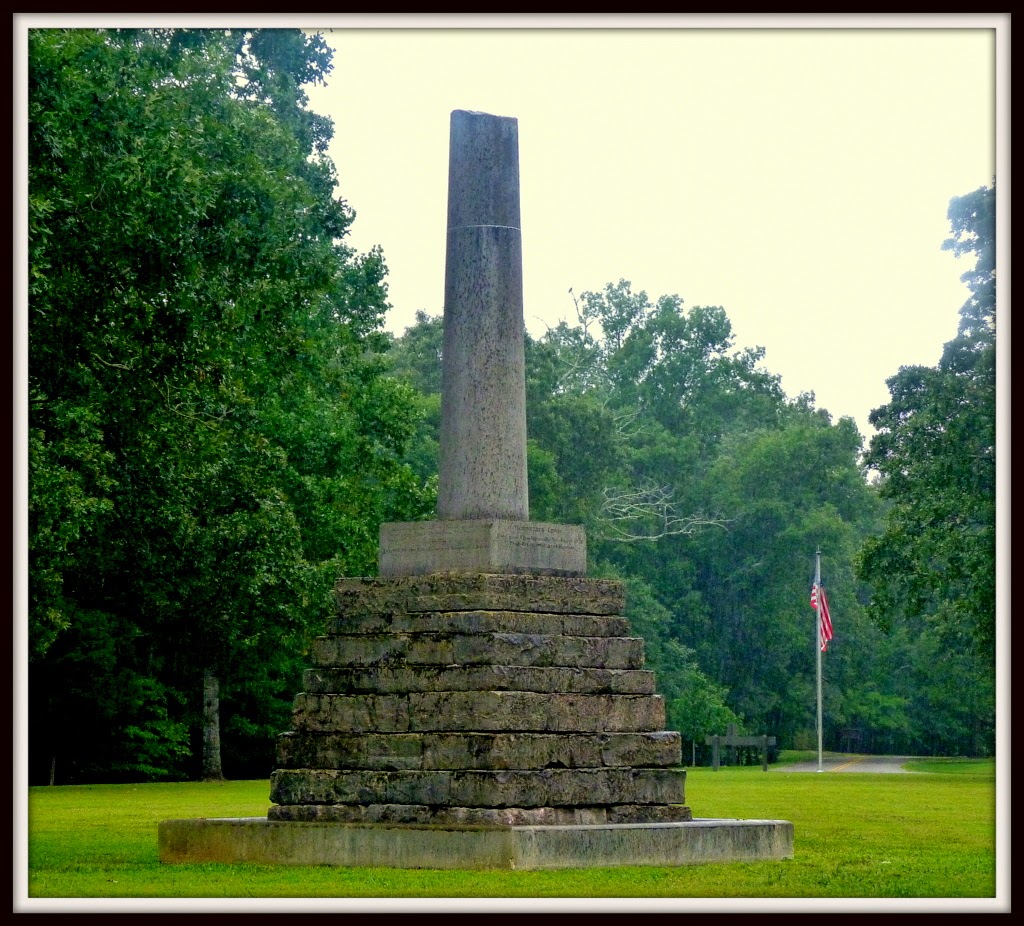 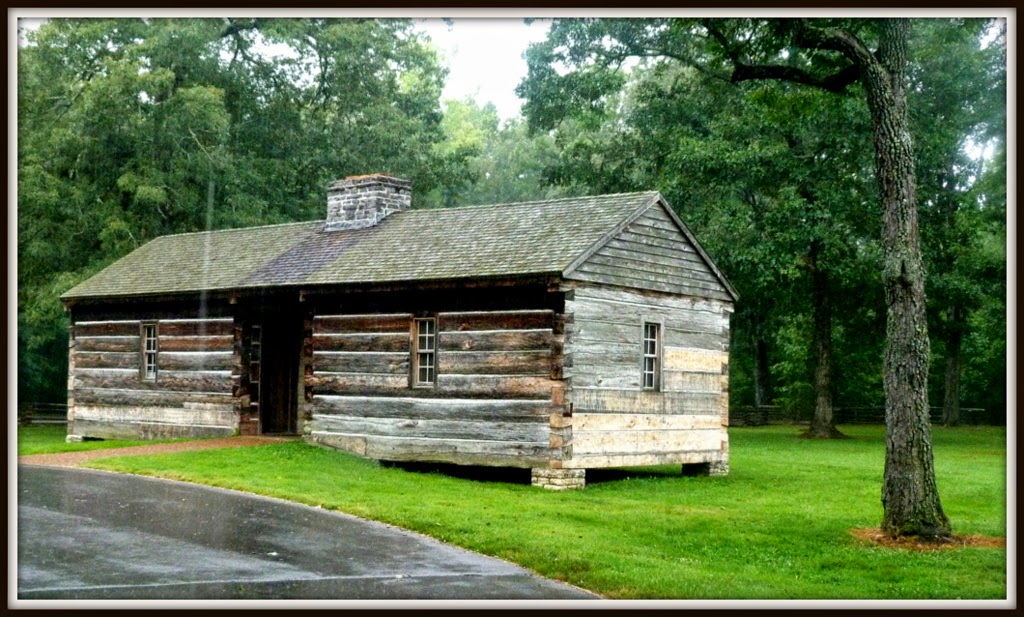 Ending the first night at this site was a delicious grilled dinner! Filet mignon, roasted beets and garlic mashed potatoes.....and a *mostly ice* drink, of course! 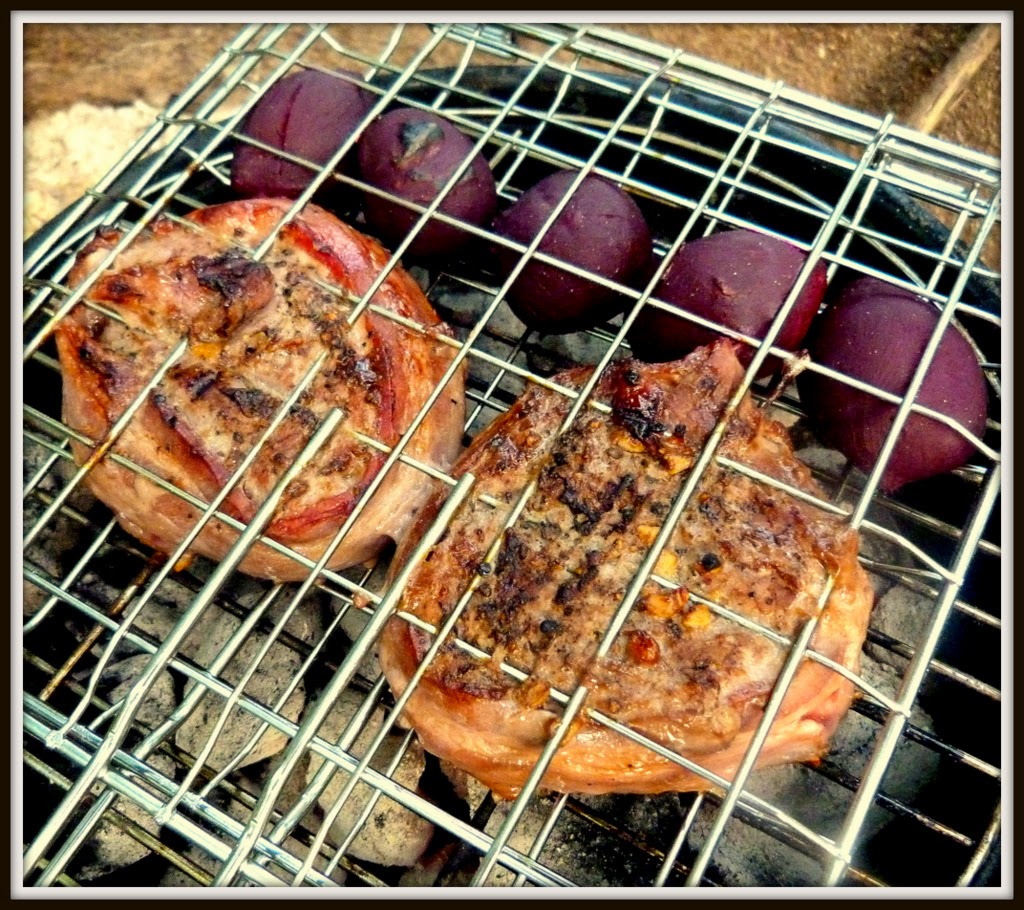 Once again, Walmart to the rescue.  I had planned on staying at the Redbud Campground in Delwood, IL, but for one reason or another, it just seemed to difficult to get to.  I just wasn't in the mood for another 12 mile dirt road and getting the RV filthy again (although a dirt road probably wasn't even part of getting there!) Anyway, I went on up to Harrisburg and hung out at Walmart.

There is a McDonald's right across the road, which really helped me out because I'm very, very low on internet data time/space til the 16th of the month.  So, I killed two birds with one stop.  It all worked out.  The most interesting part of this stop was this morning when I was getting things ready to leave, a man on a bicycle came right up to my back window where I was standing inside and was pointing at something behind the RV.  I just gave him the 'thumbs up' so he would go away, but I was curious as to what he was pointing at.  After he rode away, this is what I found -

I was a little taken aback for a second, then I realized it was a plastic TOY gun!  LOL!  I hope he knew that!

I woke up to rain in the middle of the night so I decided to do a little night photography from the window....fun - if you like that sort of thing! 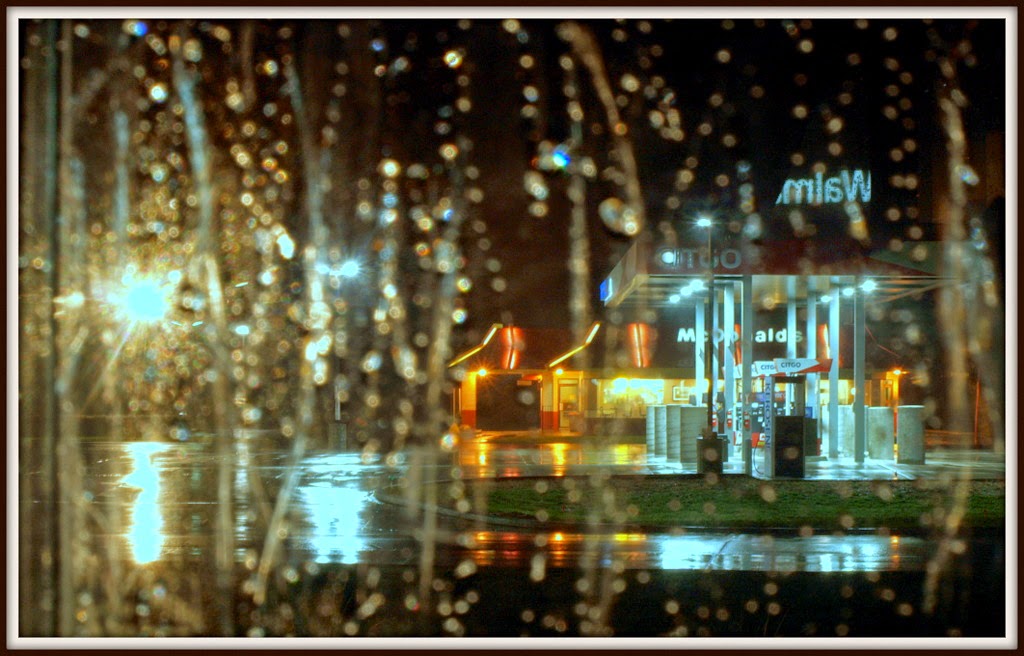 Maryland Heights is just west out of St. Louis.  The only way I knew I was somewhere around St. Louis was because I could see the arch while sitting in traffic on the highway... 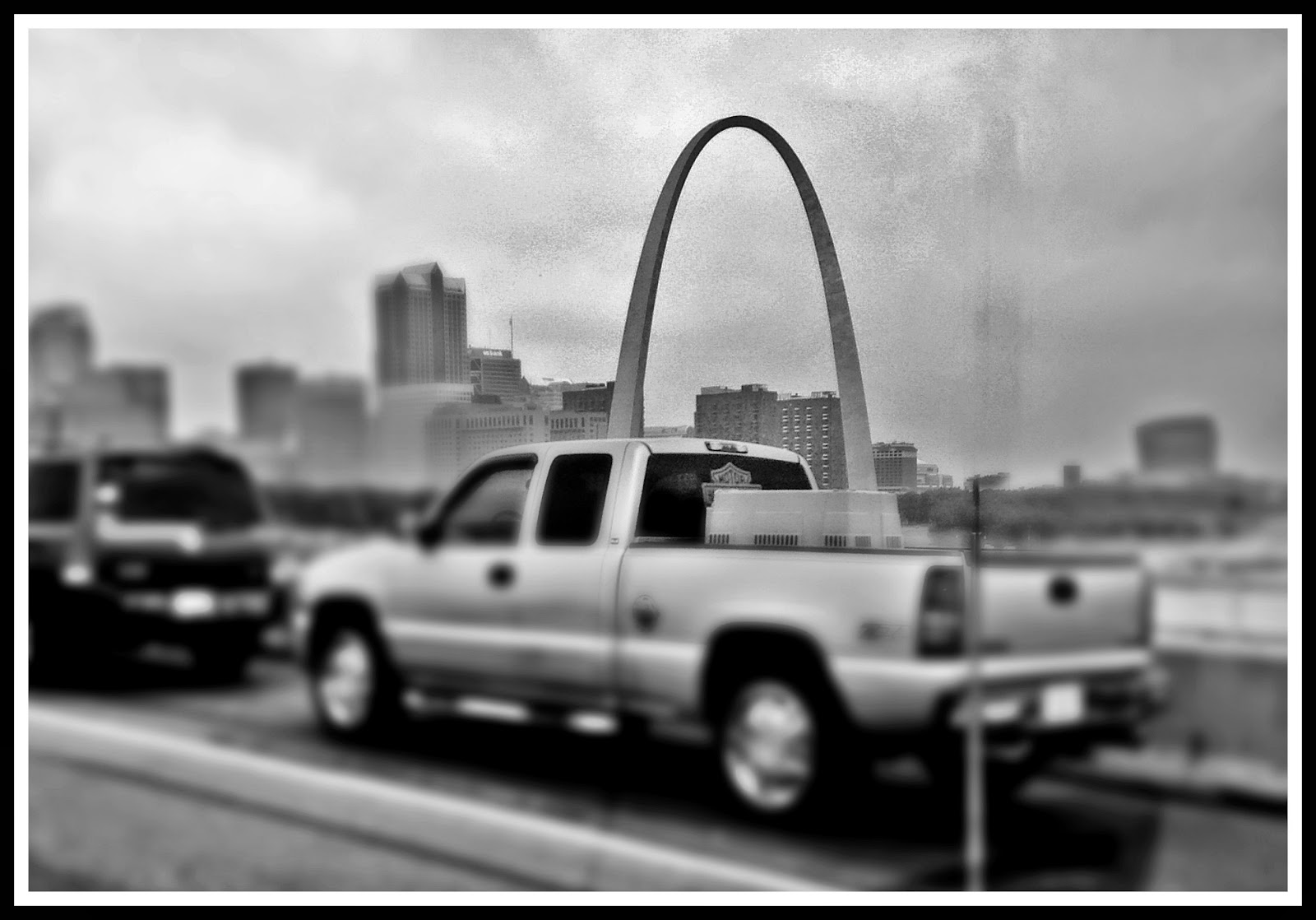 Most every casino will let RVers stay overnight - no problem.  They anticipate you coming in and spending money, I guess. I'm way back in the back of the parking lot.  It was pretty sparse when I arrived around 1pm, but it is filling up now, at 7:30pm -- Saturday night out at the casino!  It's tempting to go in and play some rounds of Black Jack, but donating money to the casino is not in my travel budget!  I've managed to spend only $35 on "staying somewhere overnight" over the course of 7 weeks.  Not bad!  Don't want to take a chance and blow that streak on the tables! ($35 = $12 for 48 hr parking in Savannah + $23 for  1 year VA WMA permit).

That ends this week....I stayed in 5 different states. Ten total so far.  Next week will take me to Iowa and South Dakota...my destination for this leg.  Plan to spend a bit of time in "The Mount Rushmore State", although I actually don't plan on going to Mount Rushmore!

Watch for updates and thanks for following!