I checked out of Featherfin WMA....no real reason, just wanted to see what was around the next corner!  I found out there is another VA WMA down by Boydton, VA...almost on the NC border...only a couple of hours away, if that.  Since I have the WMA Permit and that's the direction I'm heading anyway, I might as well explore!

I drove into Farmville and stopped.  Wanted to check it out.  There is definitely civil ware history here. Sailor's Creek Battlefield State Park is the site of the last major engagement of the Civil War.  On April 6, 1865, Gen. Robert E. Lee's Army of Northern Virginia lost 7,700 men, including eight generals, in the Battle of Sailor's Creek.  This defeat was key to Lee's decision to surrender at Appomattox Court House 72 hours later, thus ending the war in Virginia.  Several other civil ware related events also took place here. 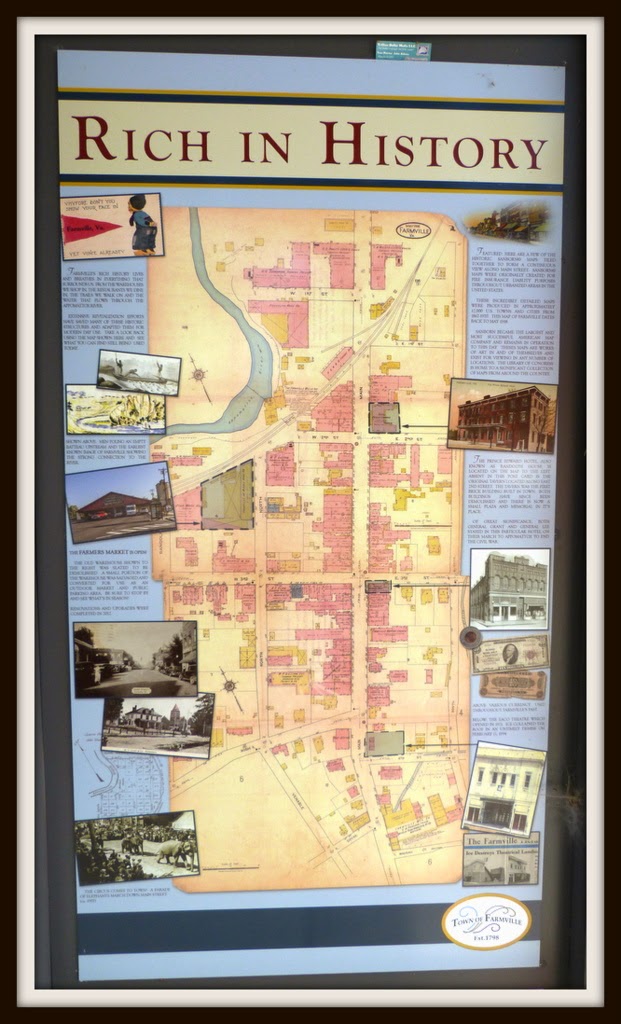 Farmville has some neat old factory buildings...some of which have been turned into retail space and restaurants.  People were pouring into one restaurant there right at 11:00 a.m.  Must have a good brunch!  I, on the other hand, had the rest of last night's pulled pork BBQ.  Just as good as their brunch, I'm sure!  And way less expensive! 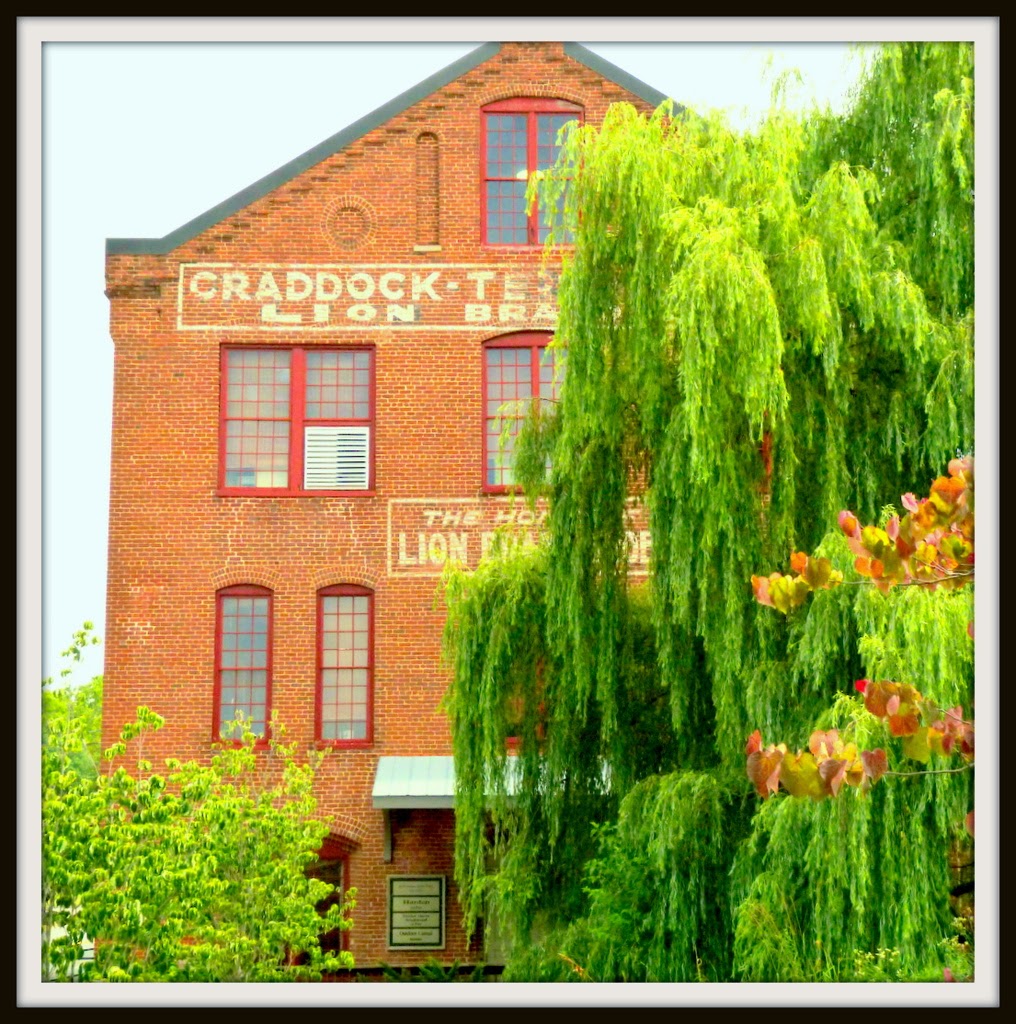 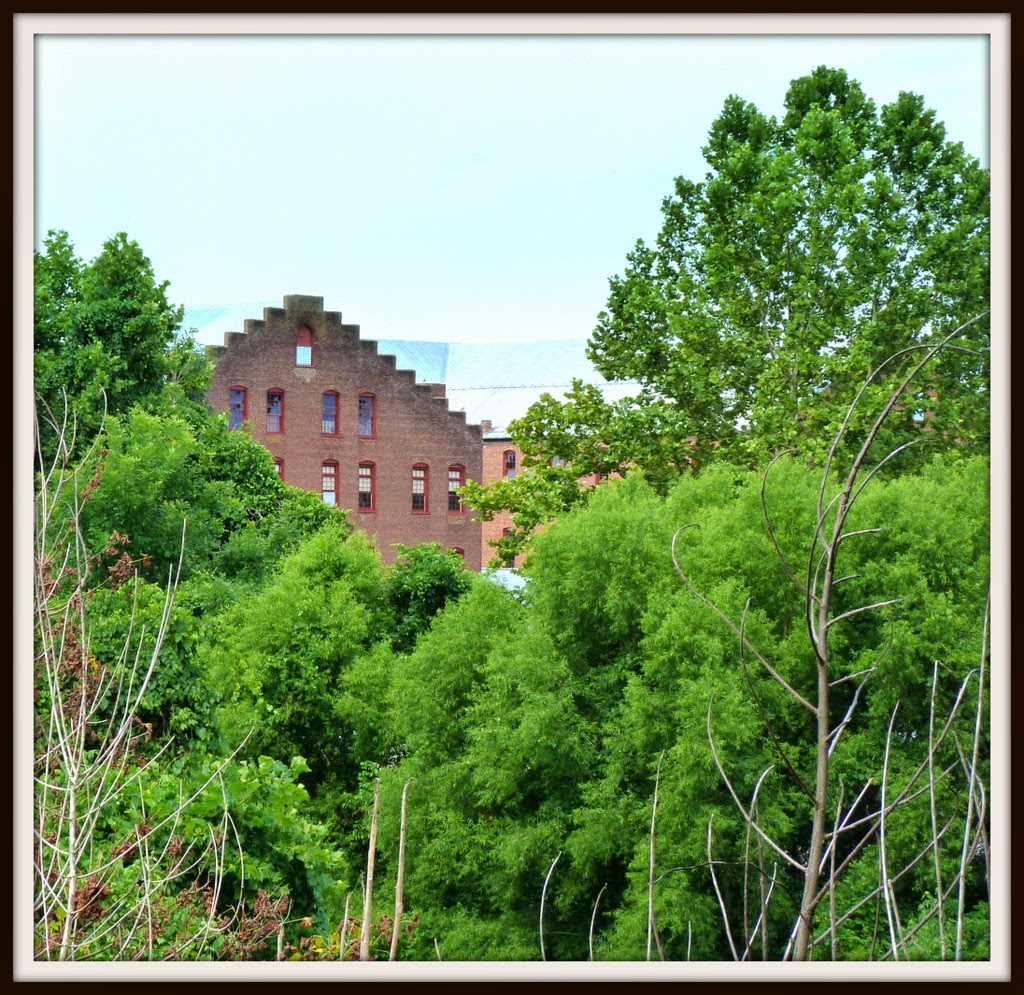 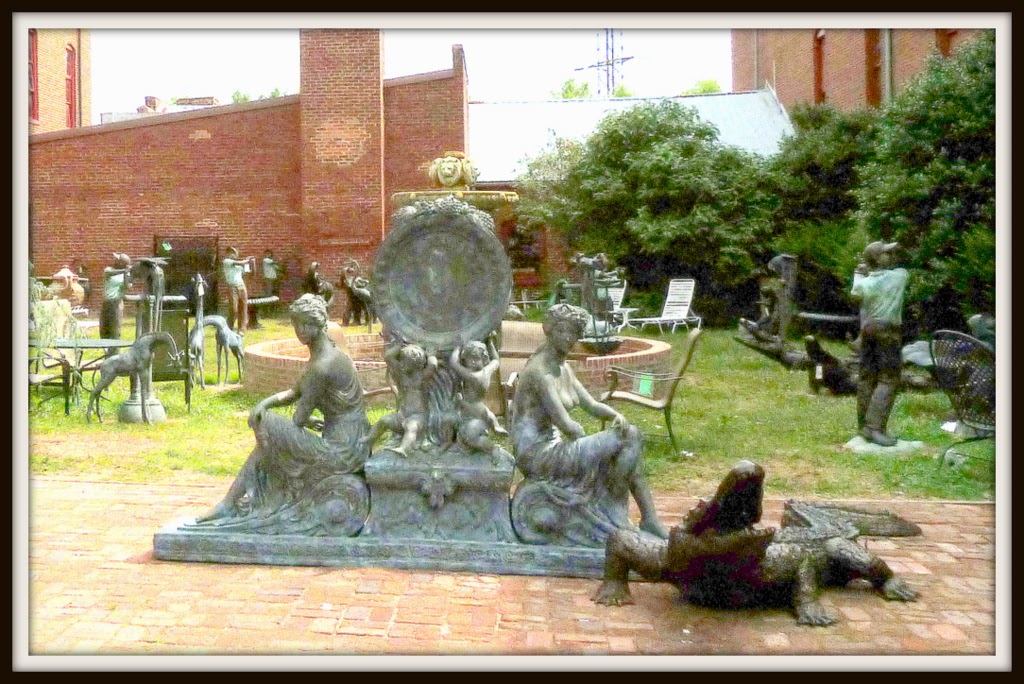 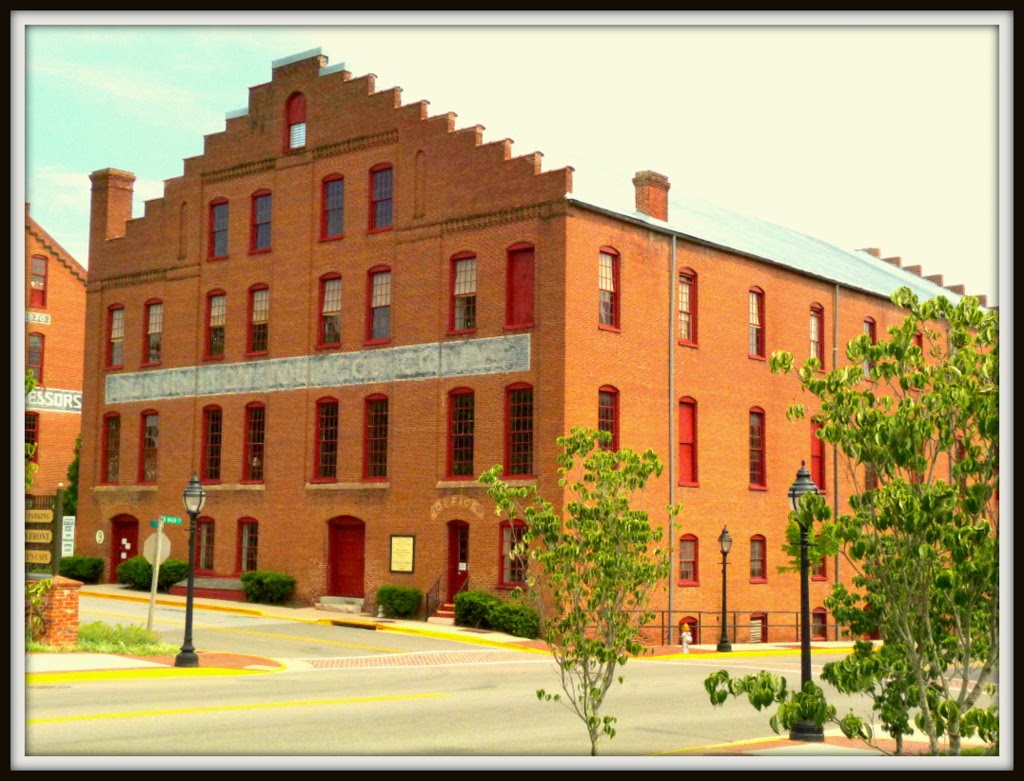 Time to get going to the Dick Cross WMA near Boydton.  Not very far.  On the way I stop at a Food Lion to pick up a few things, then just before the turnoff into the WMA, I fill up the gas tank.  $3.34/gal! I kinda wished I had needed more gas at that price!  It's been fairly low through Virginia.  The generator doesn't come on if I'm under 1/2 tank.  It's hard to discern exactly how much gas the generator is using so it's a safety precaution so you don't run out of gas out in the middle of nowhere.  Who do we know that would be out in the middle of nowhere???

I'm expecting a bit more of the same type of landscape as I experienced at Featherfin.  It definitely starts out the same...down a long, one lane gravel road -- about 4-5 miles.  No confusion here, tho', about whose property is whose.  There are no houses along this lane!  I go past the signage with all the "rules".  I am seeing some pronounced turn-in spots - all empty, of course.  But I keep going to see which one might be the best.  Primarily, they are directly on the road...big enough for the RV, but just barely.  I'm thinking....oh well, it's  nice and quiet out here and no one is going to be here, so smallish is fine.  Just as I'm thinking about how I will turn around, I see I'm at the end of the lane.  There's a big iron gate across the road.  Well, there's also a pretty sizeable site right there, too!  YAY!  It's a little lower than the road, and relatively deep, so I won't be sitting right up on the road...and there's plenty of space!

OK!  I think I'll stay!  I back in after a few tries getting to the most level part of the site...turn off the engine, hop out and look at my levels.  Not right on center "0", but pretty close.  I don't think this will be a problem!  I'm enclosed by high foliage/thicket on one side and dense woods on the other and in the back.  Perfect!

In no time flat, I'm all set up with my mat, chair, table and the awning is out.  With just a about a week under my belt, I'm getting pretty good at this! 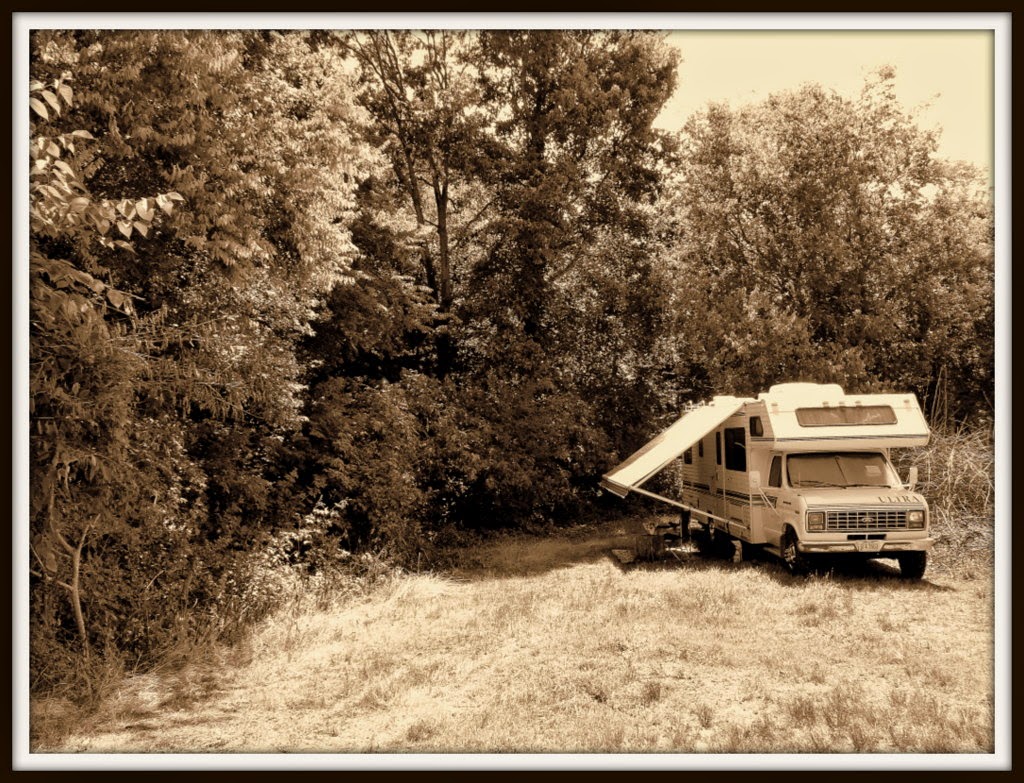 Of course, I want to see what's around here...not going "hiking" per se...will do that tomorrow, but just going to take a glance around.  This is the road that got me out here... 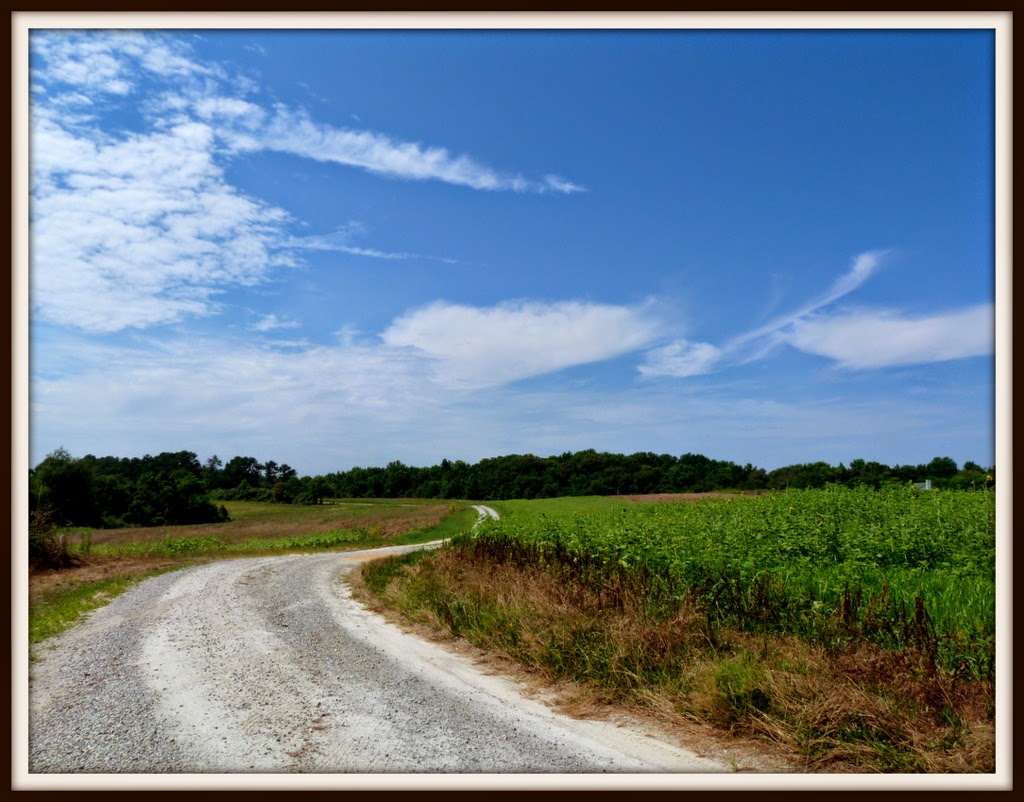 And this is the field on the other side of the thicket...the thicket divides my site and the field... 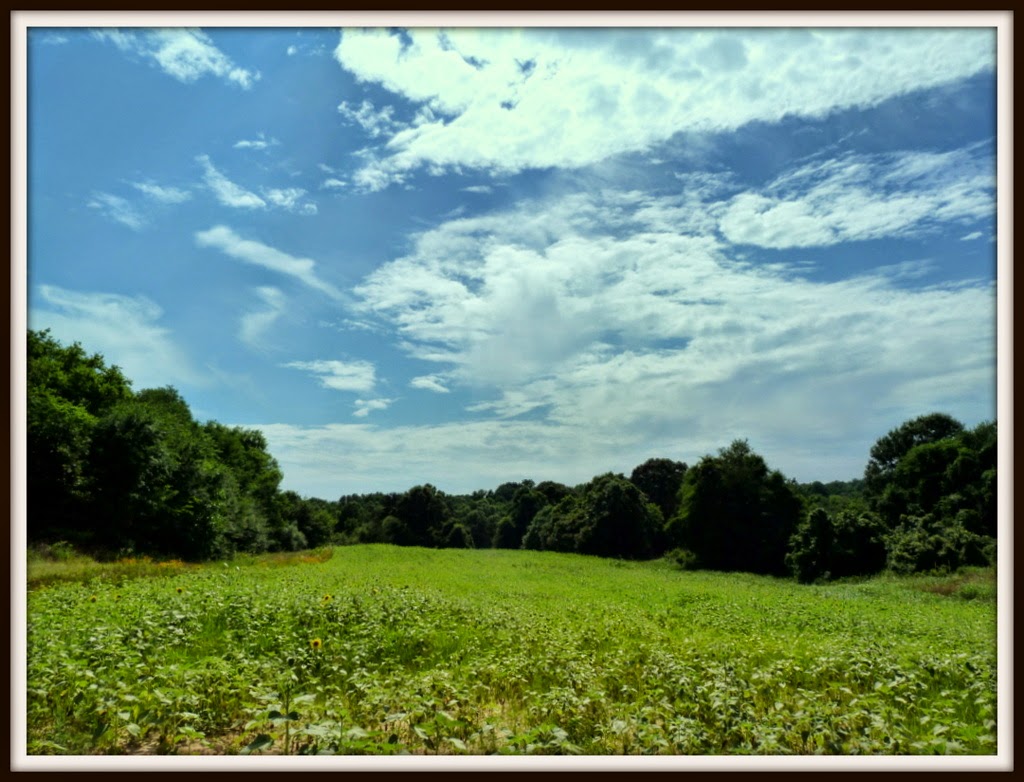 Guess what??? It's a field of sunflowers!  You'll see more pics of them as we go along, but I wish I was staying for another week...they would all be in bloom!  I was wrong about the landscape being the same as Featherfin!

I turn around and go to the iron gate...it's easy enough to walk past it, so I wondered what was down that way... 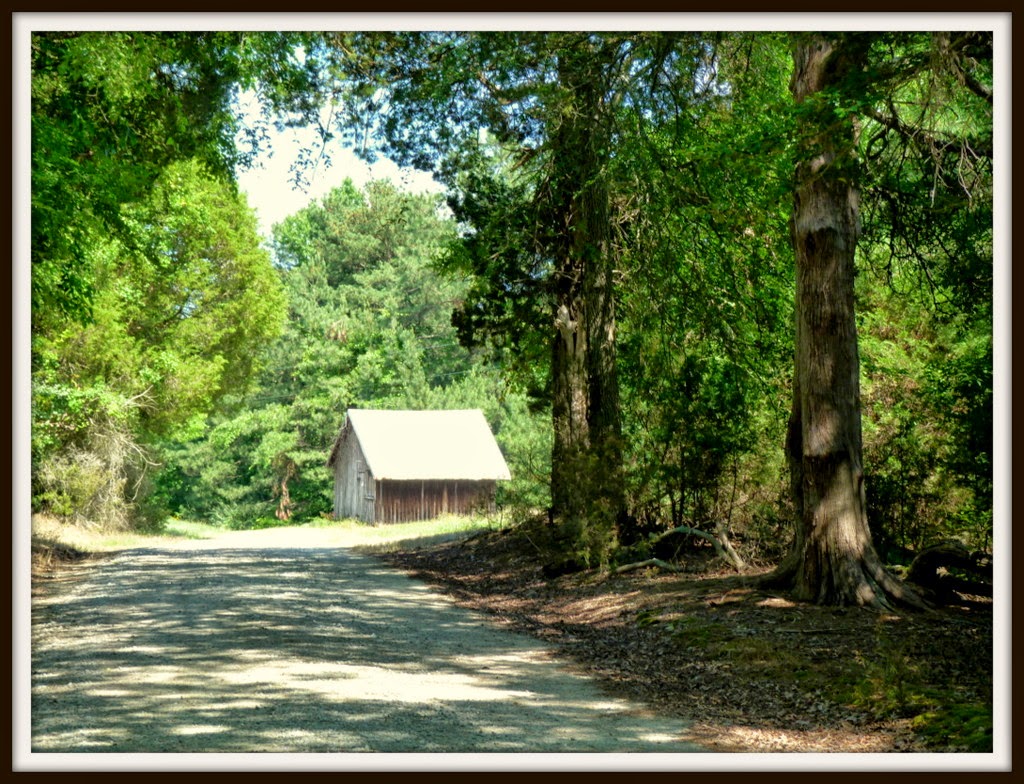 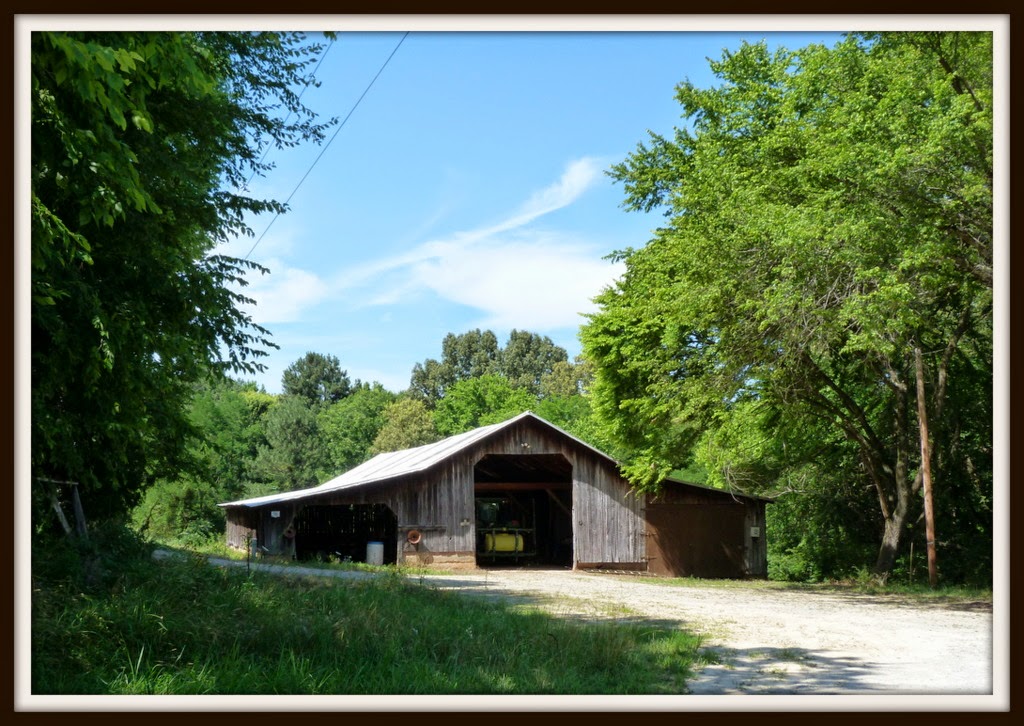 I'm thinking this is where the WMA keeps some of their equipment...there's no house down here although there probably was at some point and these are the out buildings that went along with it.  It looks like maintenance-type equipment.  Here's another old building on the property...pretty cool... 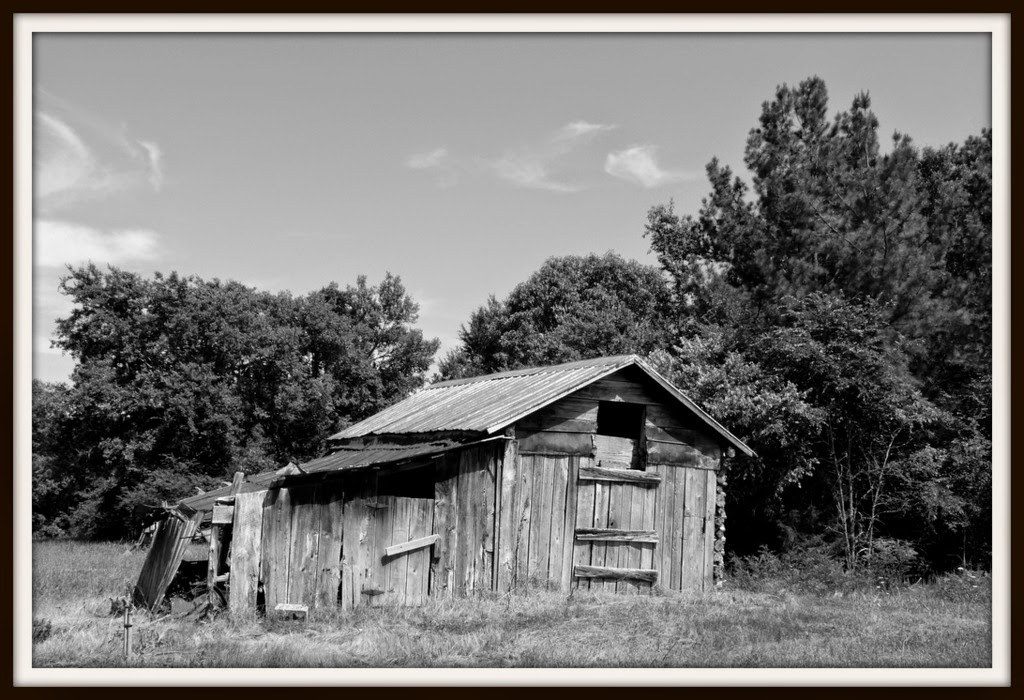 Time to settle in and think about dinner, cleaning up, etc.  I think I'll grill a pork tenderloin...along with the remaining corn/tomato salad, but with some relish added.  I'll make up some jalapeno jelly glaze for the pork. 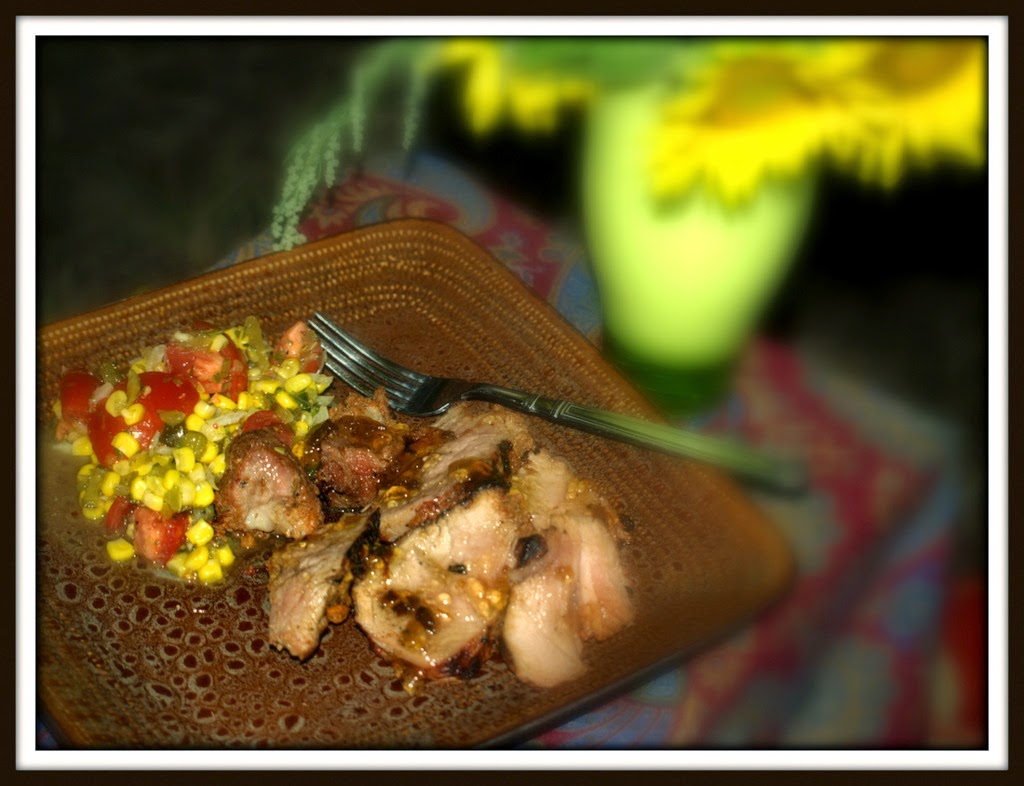 I picked up some peaches on the way...they are sizzling on the grill in butter and brown sugar!  Will make a fine dessert! 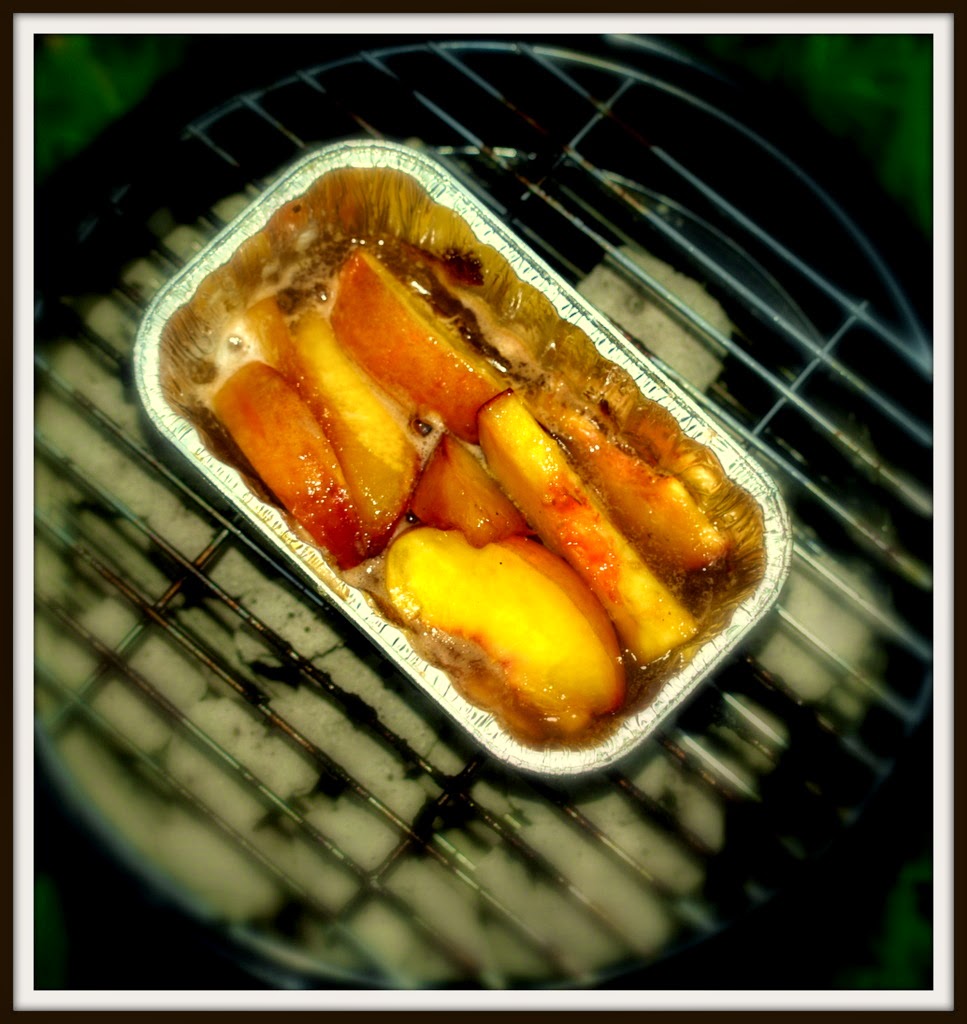 But first, the sun is setting...let's see what that brings from this new vantage point... 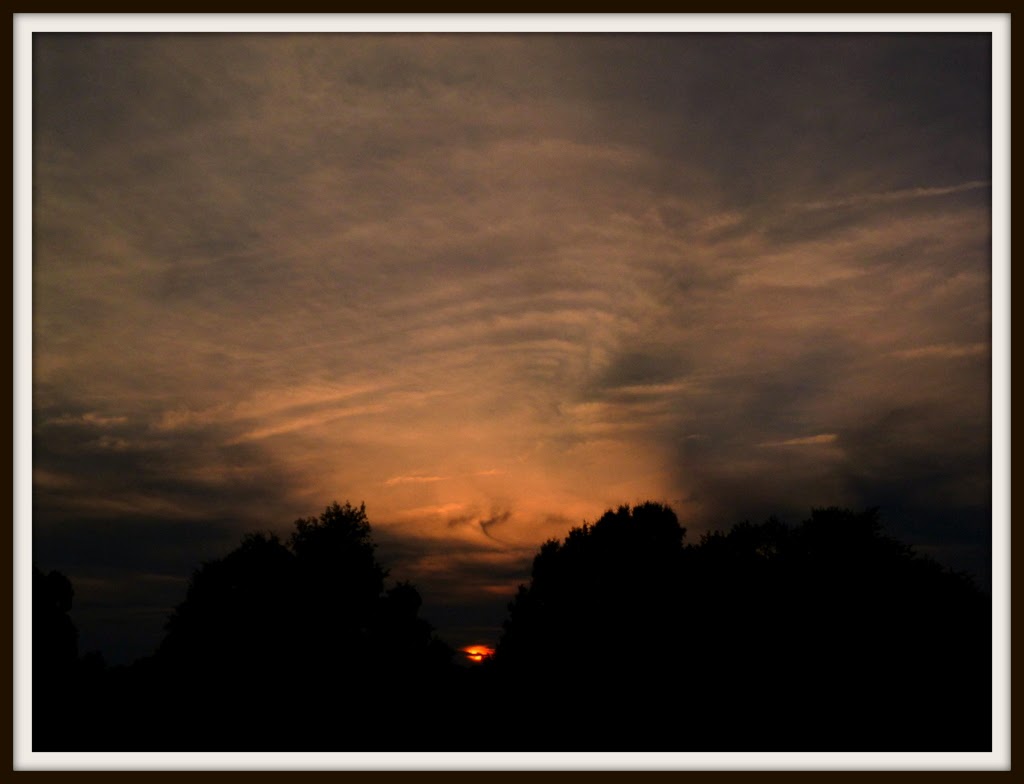 The sun is setting exactly between two groves of trees looking across the sunflower field.  Interesting swirly cloud pattern and colors! Glad I caught it!

The close of another day....I think I'm going to like this spot!  Time for those sweet, warm peaches!

Whenever you might be reading this....bring a little sun...flower...into your day! 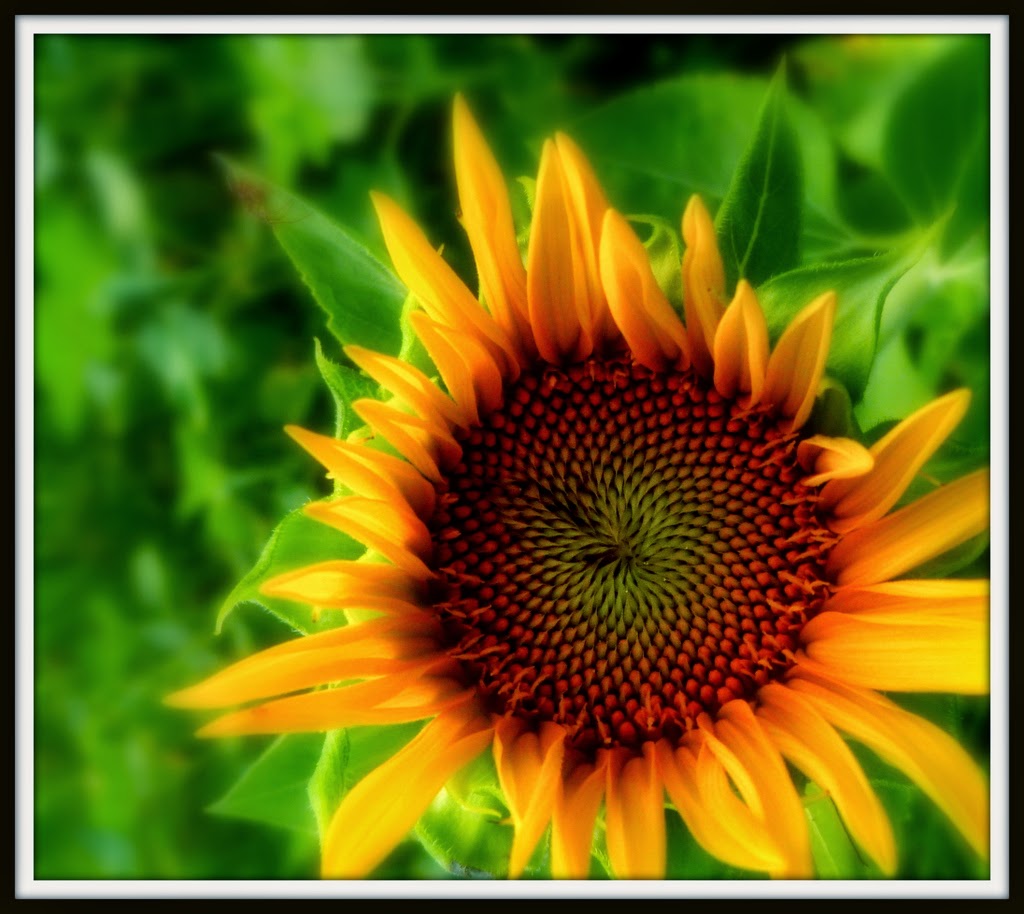