You might recall the other day I gave you a glimpse of Beaufort from the water.  Today I decided to drive over vs. biking.  The RV has been sitting since Friday...wanted to get the batteries charged up a bit...and I wanted to be over there before it got too people-fied aka 'tourists'.  I've been there before, but it doesn't seem to lose it's appeal.

The first stop I made was to the "Old Burying Ground"....it's a wonderful, old cemetery....lots of old trees, azaleas, and magnolias and almost indiscernible paths...no rhyme or reason to any of it.  Very overgrown, but that's one of the aspects of it that I enjoy most.  There are over 200 stones dating from pre-Civil War. The earliest legible date on a marker is 1765 although it is estimated there are more just as old that are not legible.  Some markers simply have no dates.  It is know there are 45 from the Civil Ware period and 150 from 1865-1890. 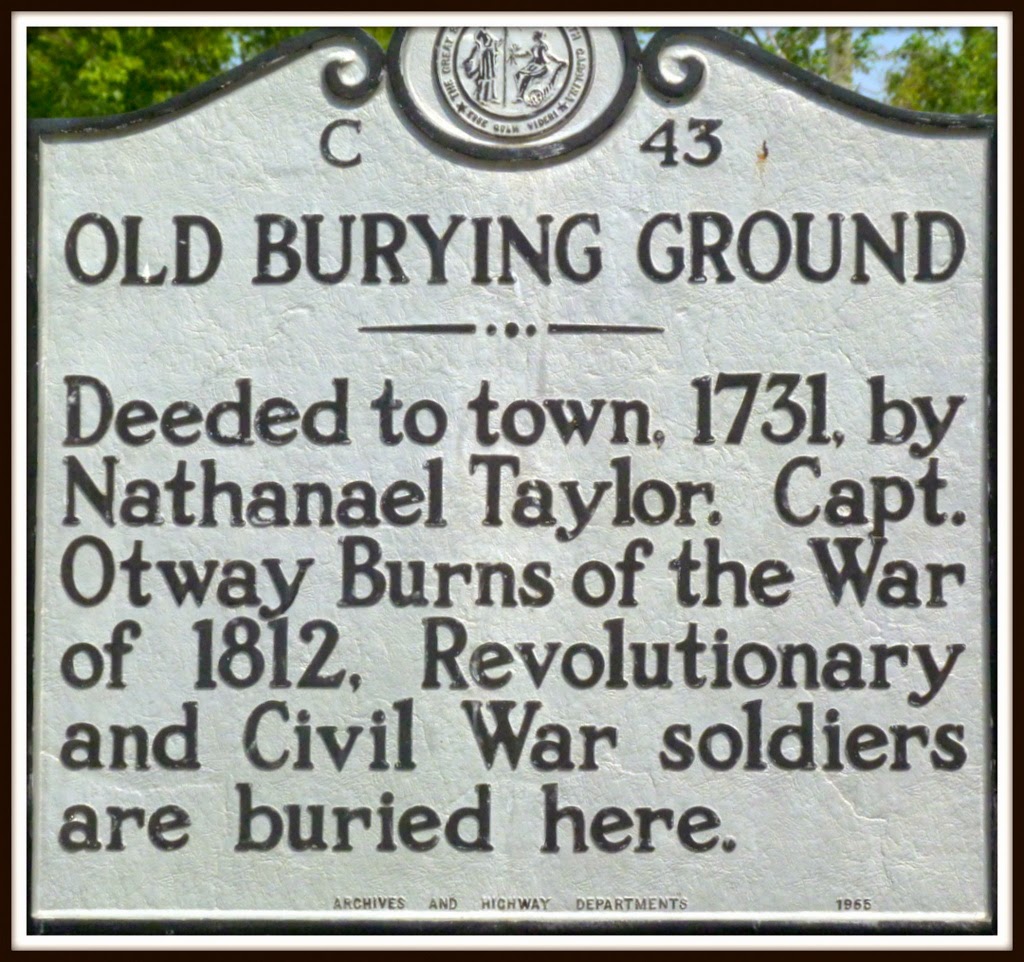 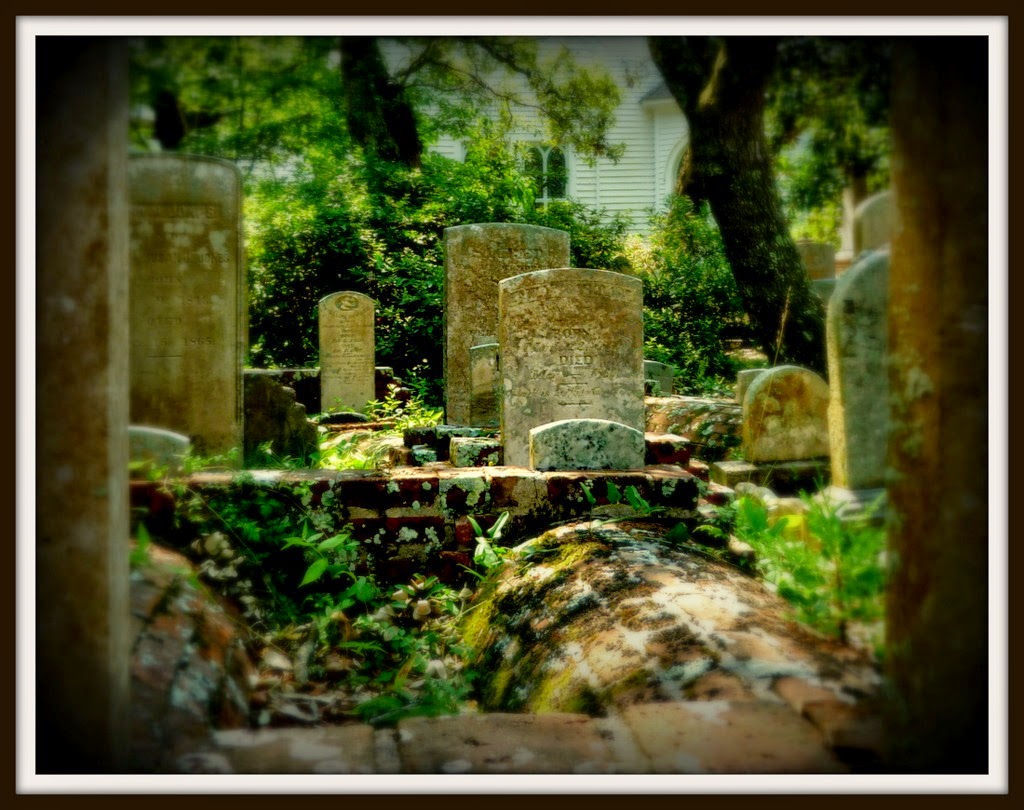 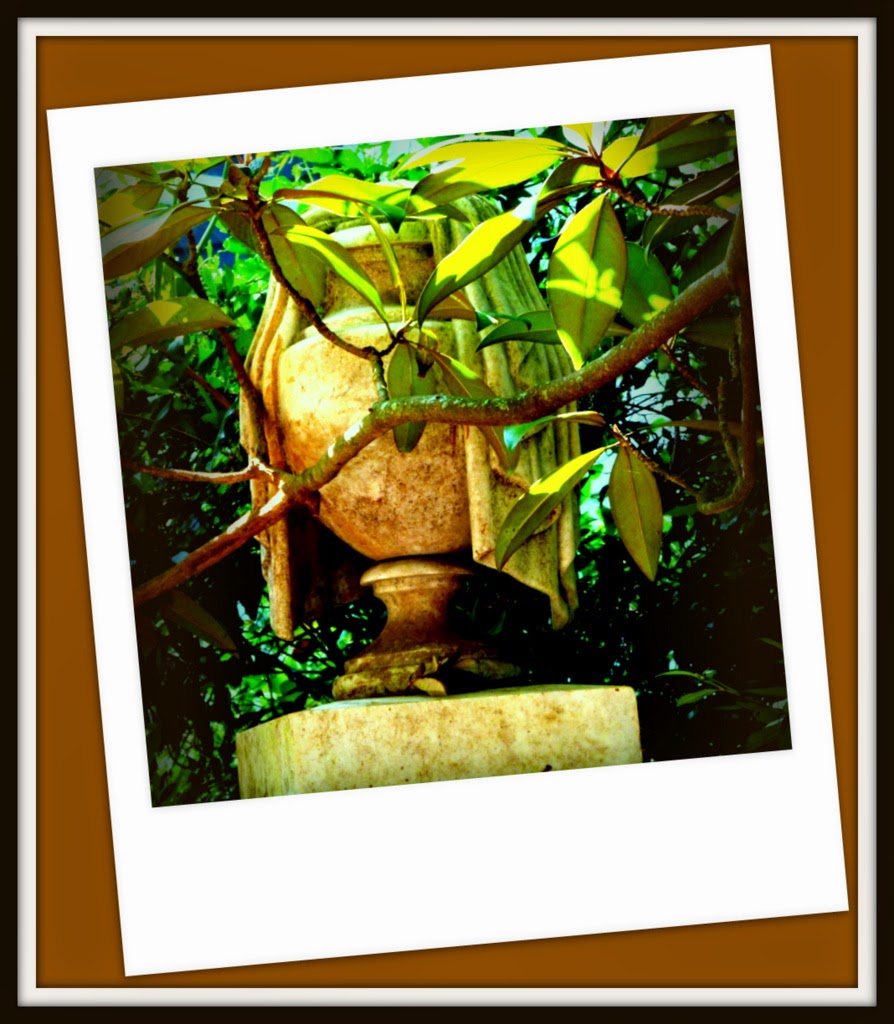 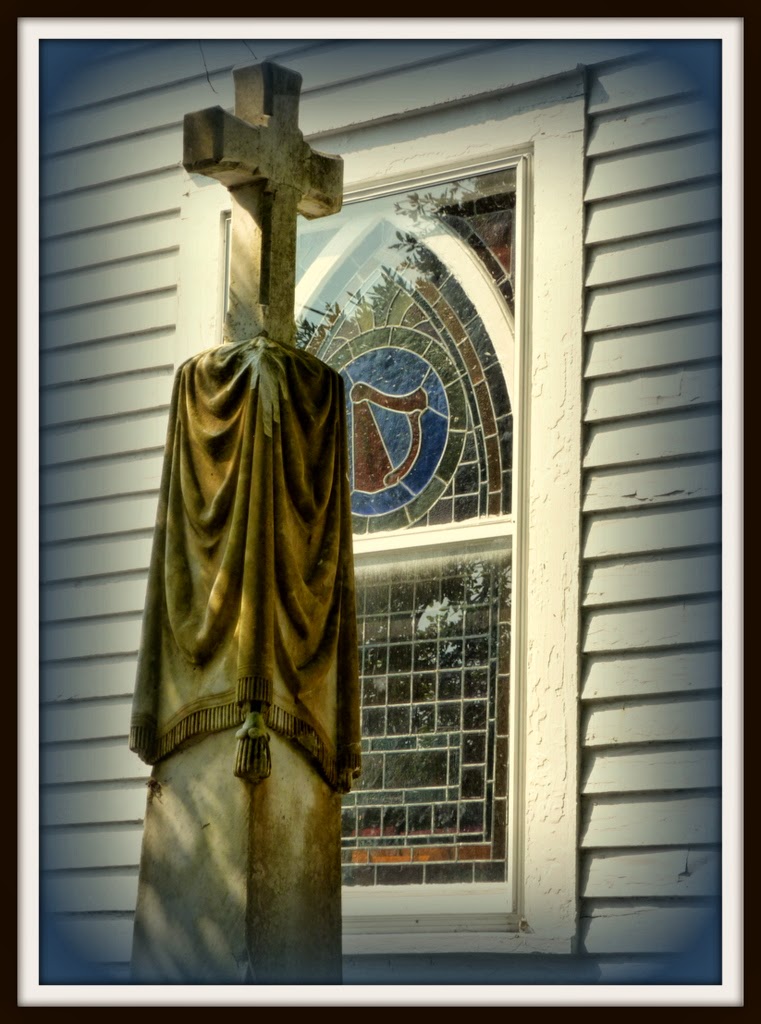 Characteristic of this time period are vaulted graves bricked over to protect them from water and wild animals. 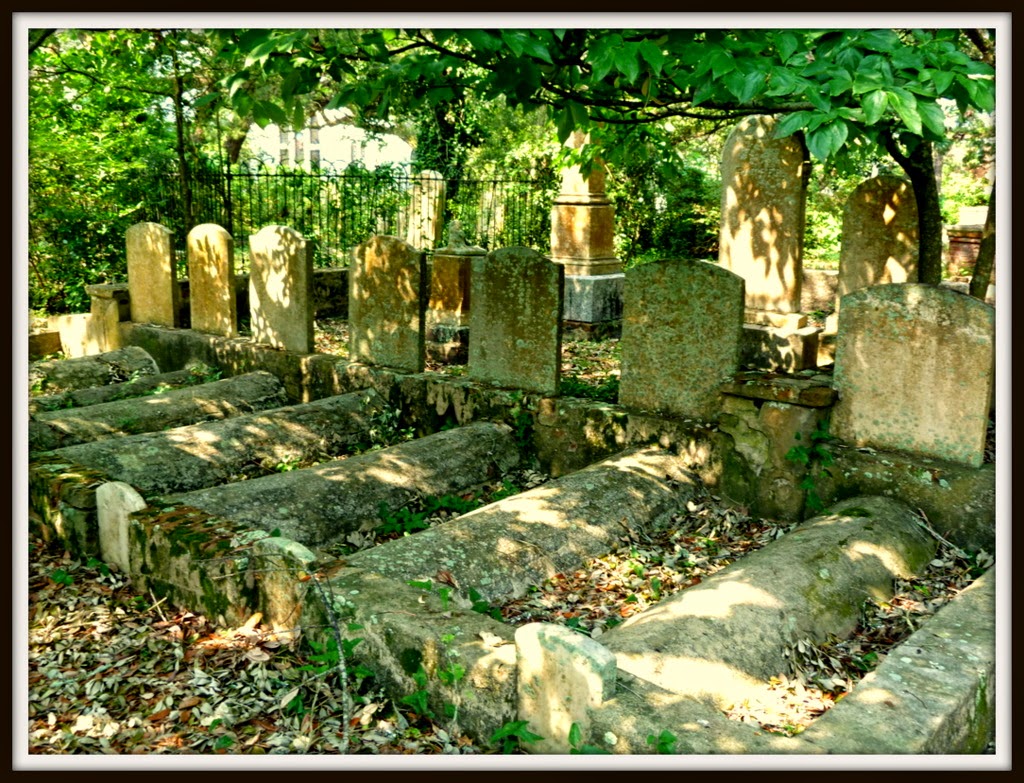 There are still old, wooden markers in the oldest section. This is the only one I saw that had an extra element to it.  Other markers in this area are shells and bricks. Stone was too difficult to obtain at that time. 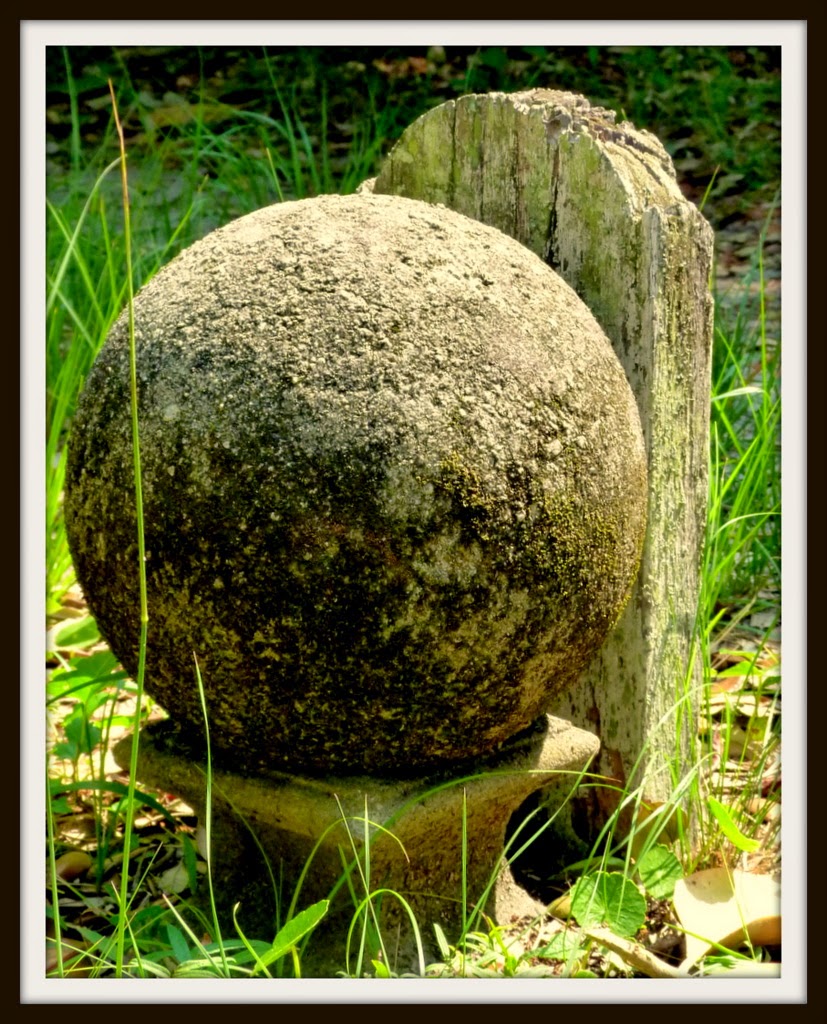 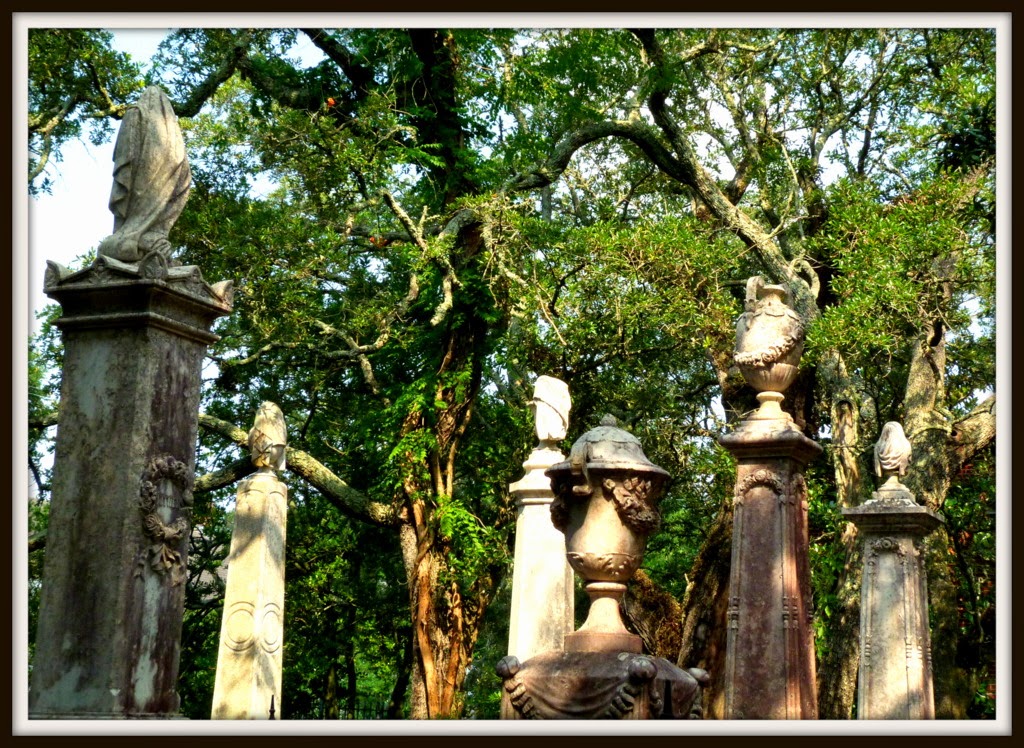 There was one disturbing incident in the cemetery, tho'. There is a grave site of a little girl whose name was never known...dates are not visible any longer, but it is old.  She is known as the Girl in the Rum Barrel.  She died at sea returning from England, but her father had promised her mother he would bring her back home. He did...inside a rum barrel. 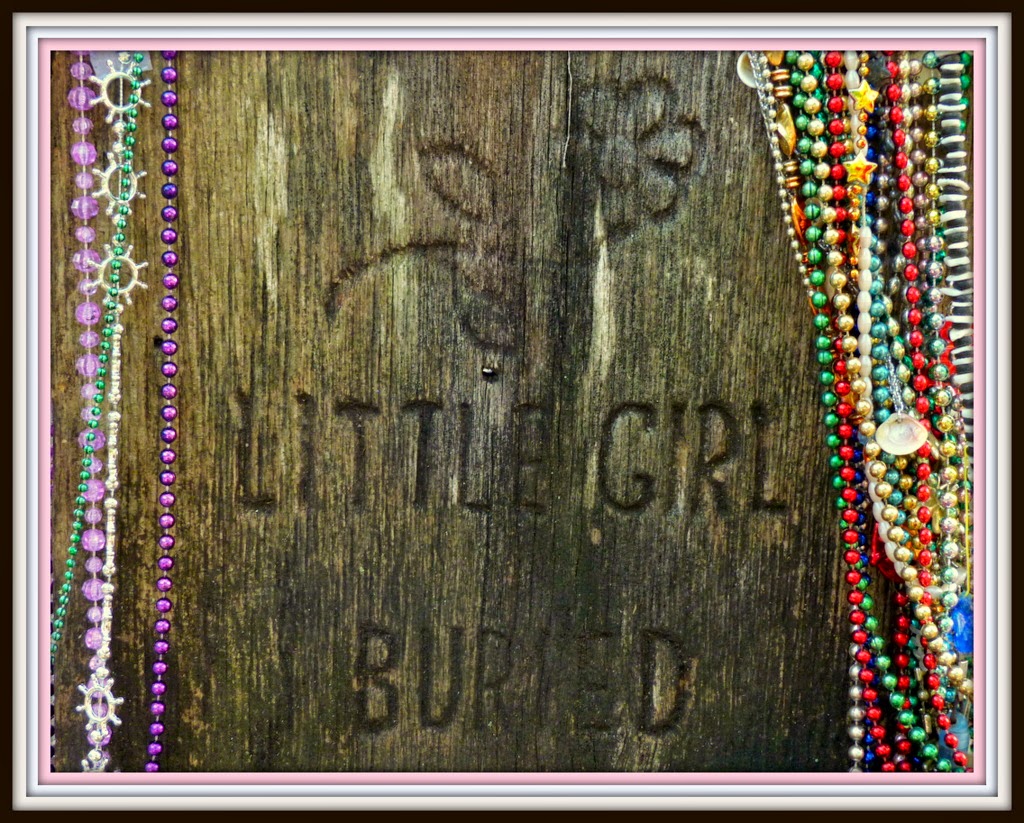 Visitors have always adorned the site with trinkets, toys...anything they may have with them...even money. 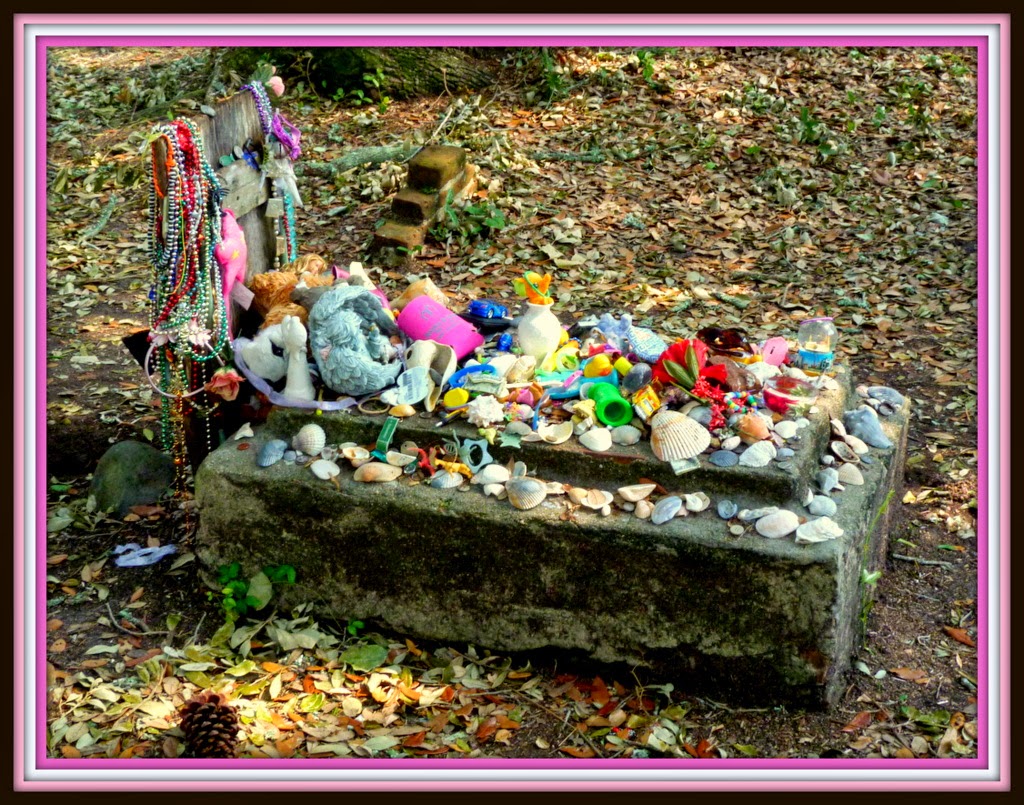 I had already been by here but after a few hours of photographing, I circled back for some reason.  To my amazement, a man was riffling through all the trinkets, etc.  He wasn't just curious...he was so engrossed in his "quest" he didn't even see me.  AND one hand was full of small items.  My camera was hip level and I took a chance that I might catch him in the act without him noticing.  I did! 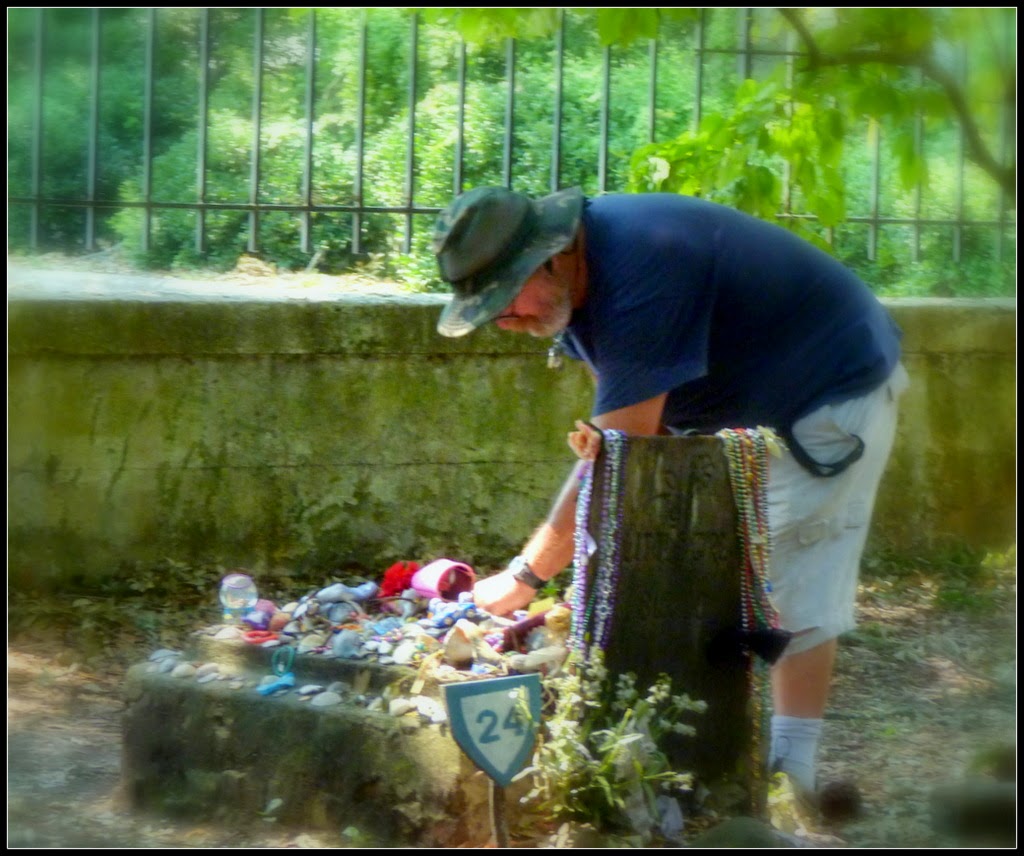 He didn't notice me for another minute, at least. When he did, he was visibly taken aback, but quickly tried to act "normal".  I didn't confront him, but he knew I knew.  After another minute he wandered away, but I couldn't tell if he had pocketed his "finds" or not.  I had taken the above photo of the site before this happened and I took another after.  He had definitely moved everything around.  Really despicable behavior. 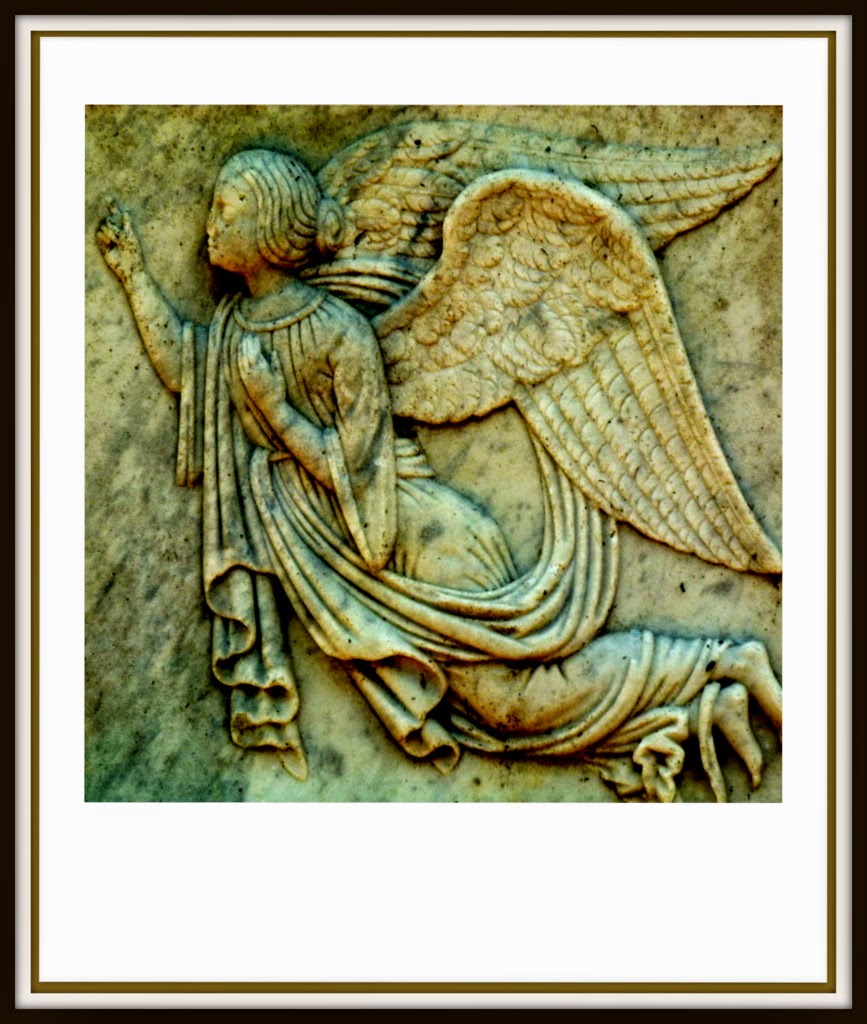 I left the cemetery and walked down to the waterfront.  It was getting to be lunchtime, so I stopped at the Boardwalk Cafe for a grilled mahi mahi sandwich and had a nice chat with the young waiter, Salvatore.  He said the diving in the area is good now, after the hurricane.  He also mentioned divers have been seeing some very different fish in the area.  That would be fun! 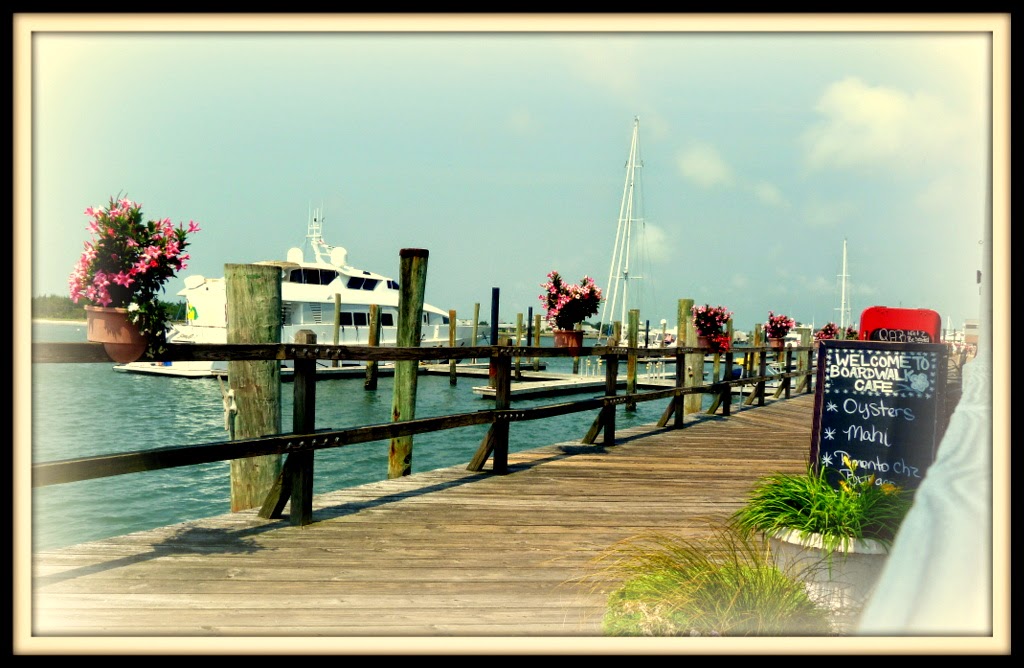 Walked down Front Street past the shops, etc., and this boat building enterprise.  Pretty impressive! 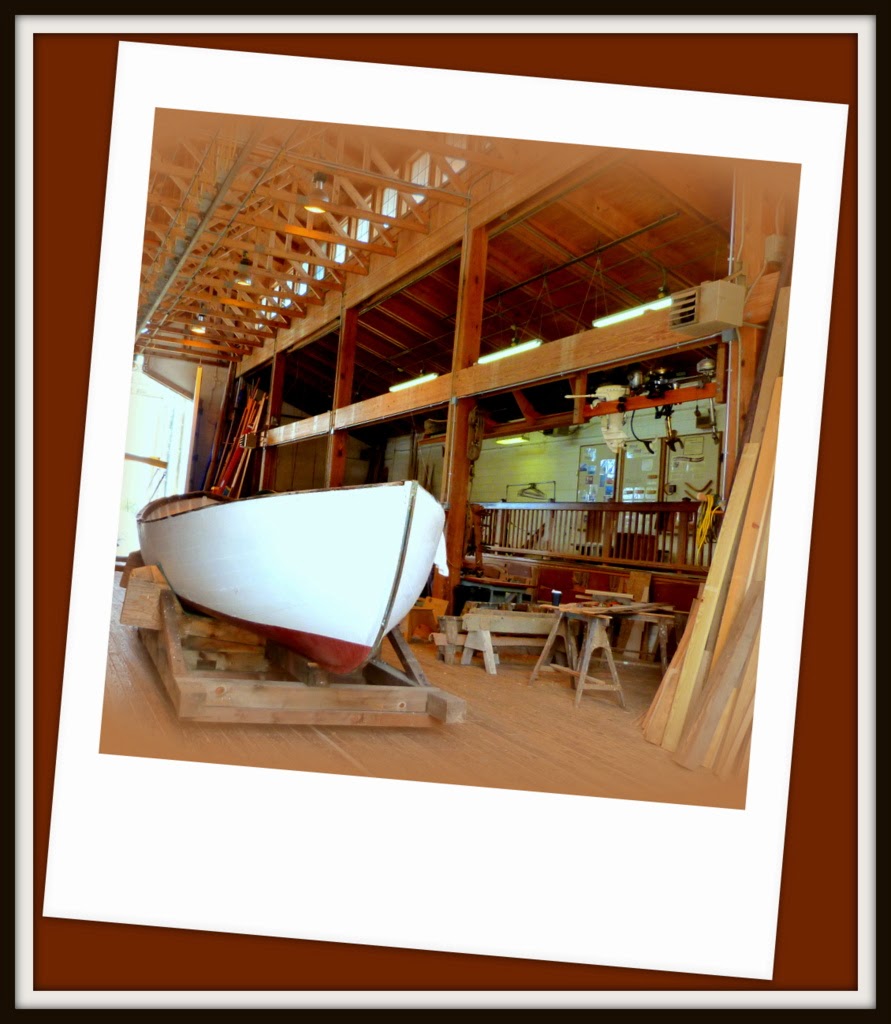 It's getting a little busy now with tourists, so I decide to head away from the water and into the neighborhood... filled with historic homes.  Seems "typical" tourists don't appreciate this part of an old town very much, which I truly do not understand....but it gave me the streets all to myself! These houses are all 1800's. 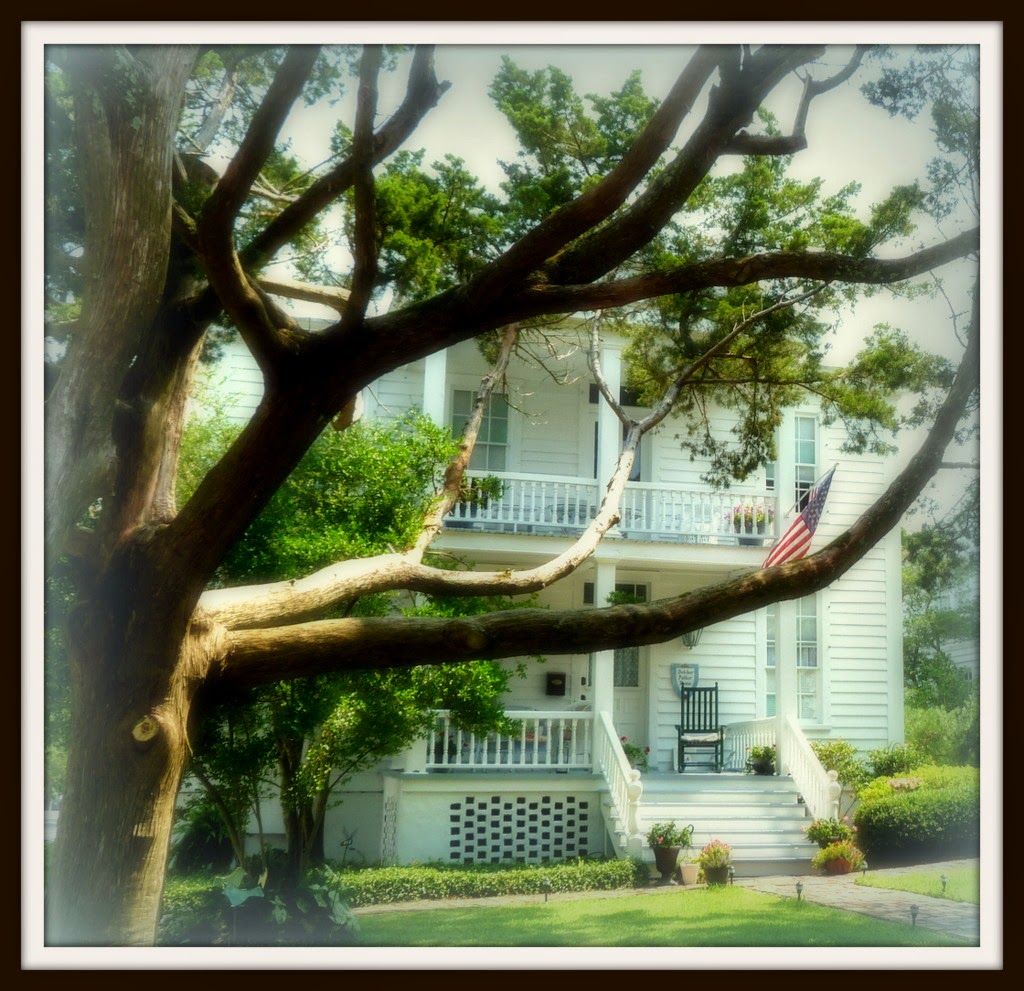 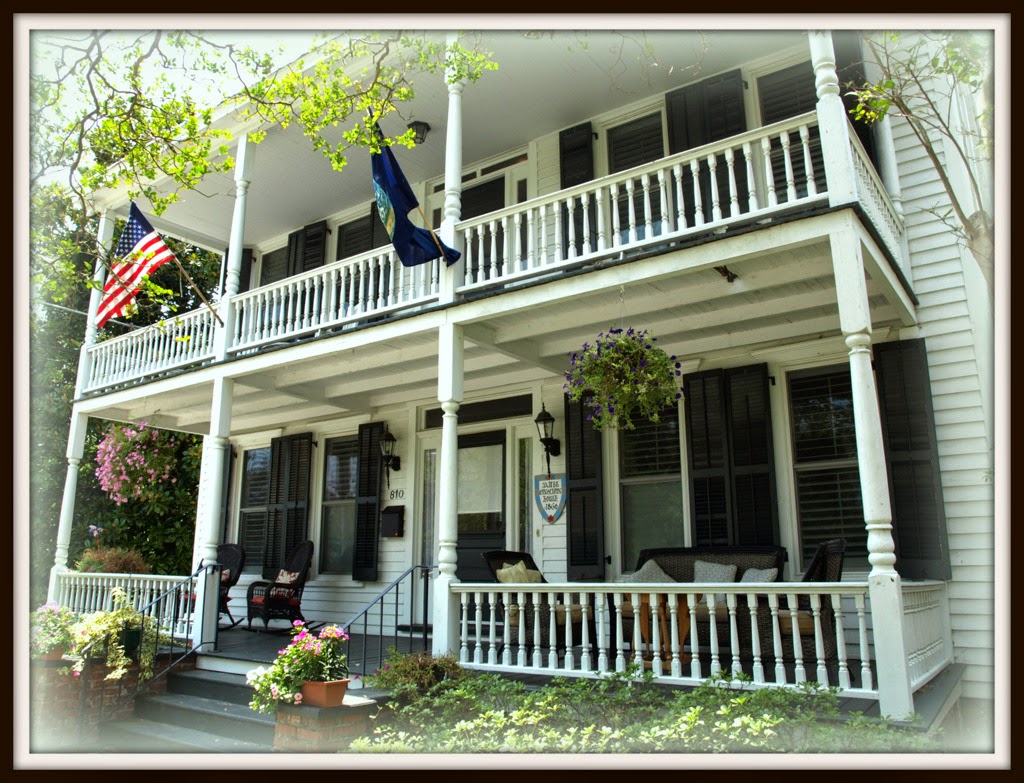 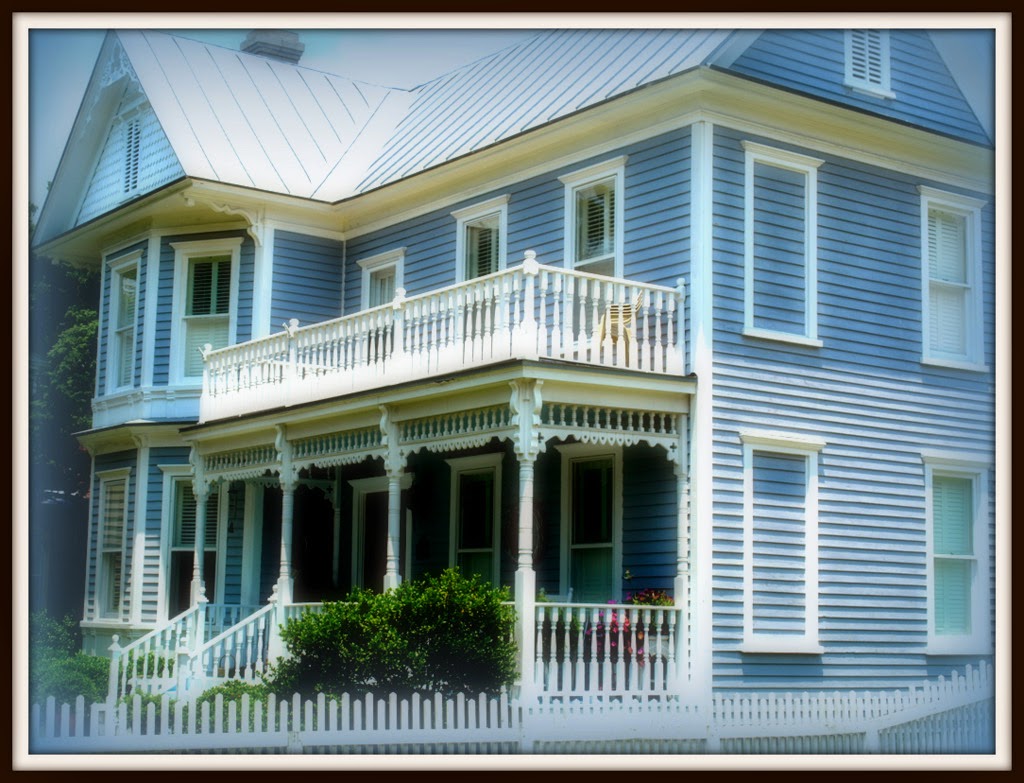 Some with quirky gardens.... 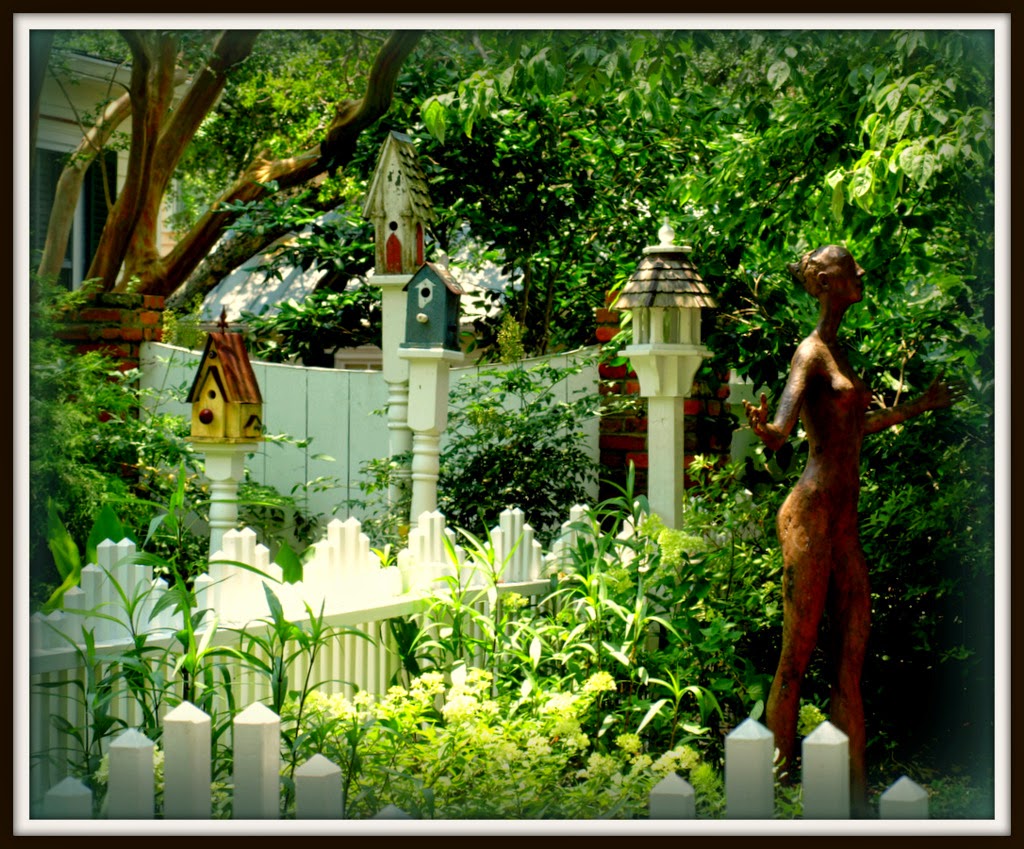 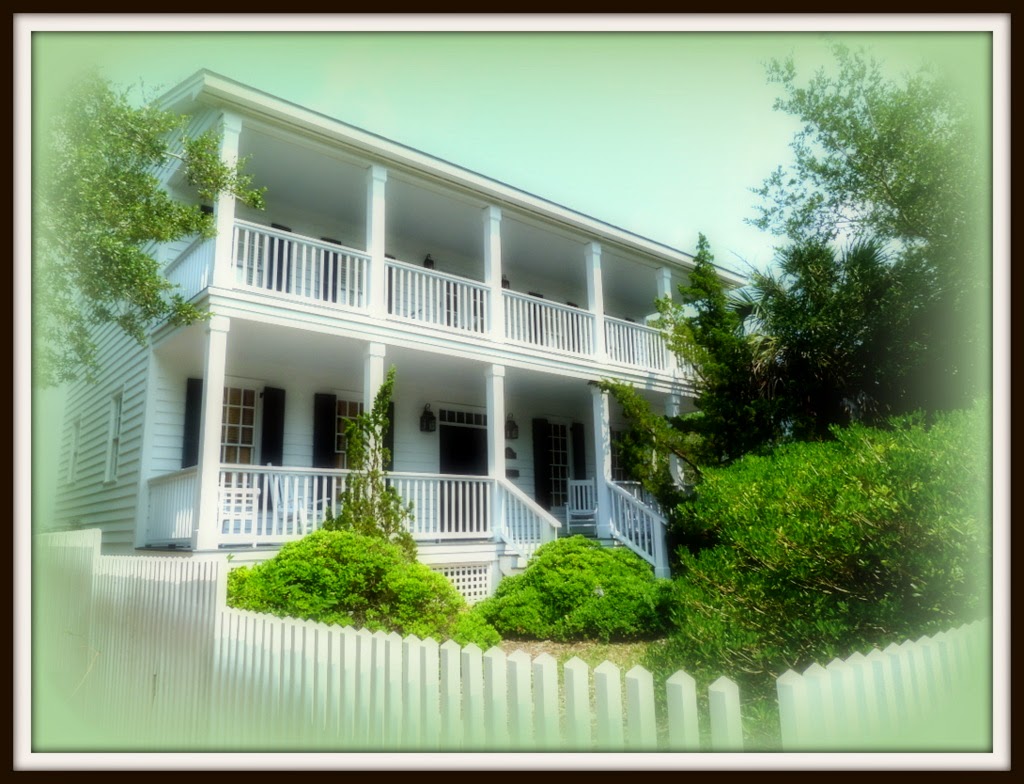 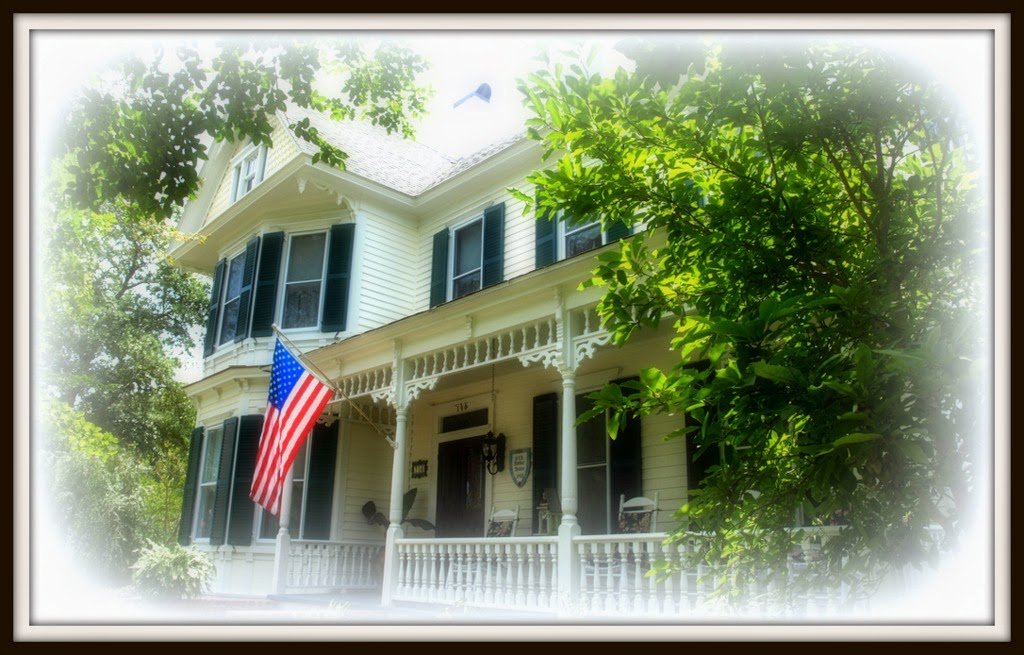 I had parked the RV in a parking lot (which was virtually empty when I arrived).  I knew, in the back of my head, it was a mistake, but just ignored what my little brain was telling me.  Sure enough, when I was ready to leave, there was NO way I was going to get out of there!  Someone even left a note on my door that they had taken my license plate number with them because I would definitely hit their car if I tried to get out.  The parking lot was full and a middle-aged man and family drove in looking for a spot.  I said he could have mine if he wouldn't mind guiding me out.  (I should have taken pictures of this predicament!)  He said, "Sure!". He sent his family on to site see and rendevous with friends and he stayed to help me. After awhile, I was ready to give up and just wait for some cars to leave.  But he kept at it. "Sharp right, forward, back, stop, forward, sharp left, straighten wheels..." Well, OVER AN HOUR LATER , inch by inch, I was finally out!  We were both elated!  I could never have done it without his help!  His name is Lawrence...from the Atlanta area. He wouldn't take money, of course, so I gave him one of the framed tiles I make...signed it with my name and a big "Thank you!!"   A great random act of kindness which I will pay forward somewhere in my travels!

(In hindsight, I should have parked in one of the shopping center parking lots on the edge of town and biked in....DUH!  Lesson learned!)

So, I bid a fond farewell to beautiful Beaufort and head back to Harkers Island.  I will be here until Monday morning, then rolling on towards Charleston and Savannah...then to Brunswick, GA.  Need to start planning my stops!  I probably won't be posting again until that leg starts.  Enjoy a great weekend, everyone! 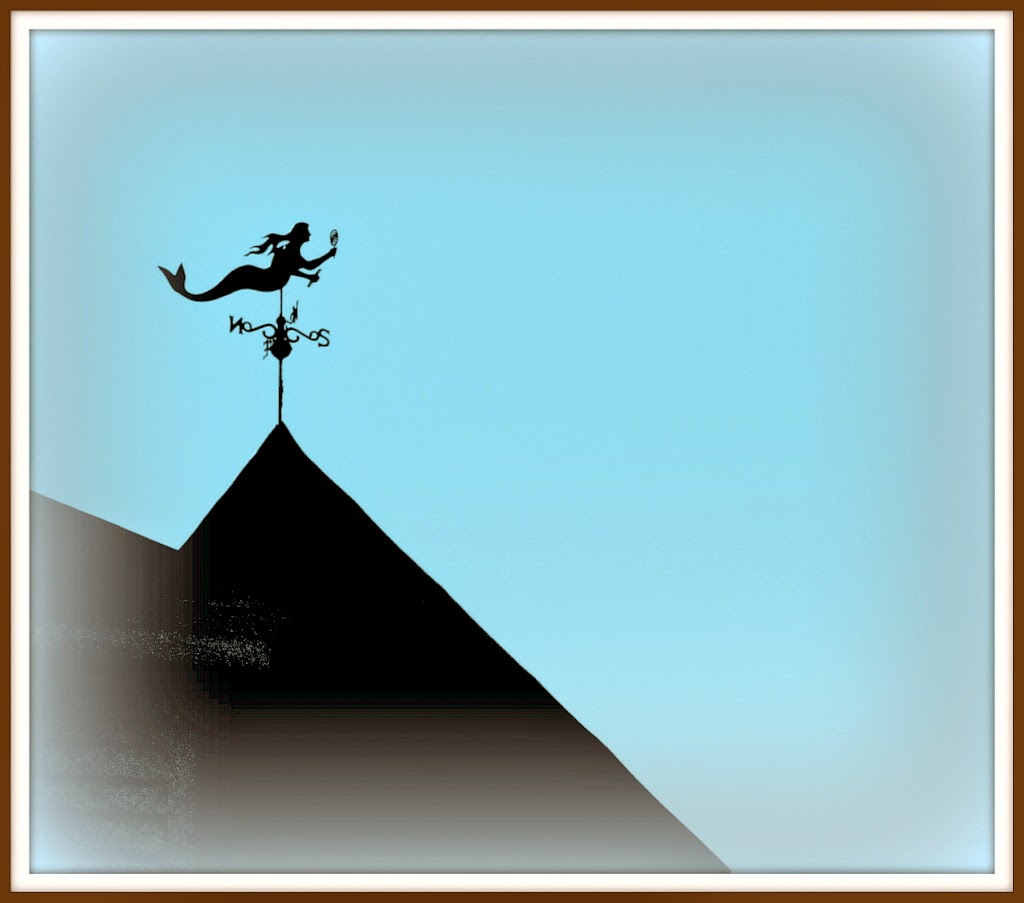